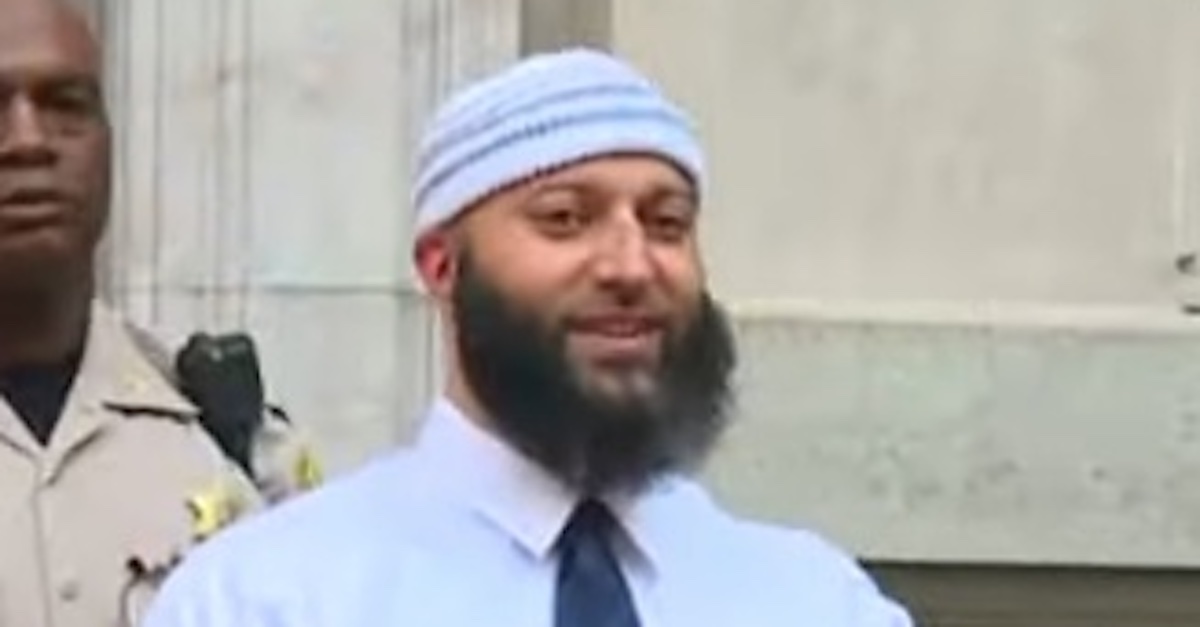 Adnan Syed is seen leaving a Baltimore courthouse on Sept. 19, 2022, after a judge vacated his murder conviction and life sentence (image via YouTube screengrab/WMAR).

A Maryland judge has overturned the murder conviction and life sentence of Adnan Syed, the subject of the breakthrough podcast Serial convicted more than two decades ago of killing a high school classmate who had at one time been his girlfriend.

Syed, now 41, was seen leaving the courthouse Monday after the ruling by Baltimore City Circuit Court Judge Melissa M. Phinn. He was 17 years old at the time of Hae Min Lee’s death and has been behind bars for 23 years. Lee was 18 when she was killed.

Prosecutors had requested last week that Syed’s conviction be overturned. Marilyn Mosby, the State’s Attorney for Baltimore City, moved to vacate the conviction, citing an investigation into the evidence against Syed and the possibility that two potential suspects had not been sufficiently considered.

“After a nearly year-long investigation by the State and defense … the parties have uncovered Brady violations and new information, all concerning the possible involvement of two alternative suspects,” the filing said, referring to potentially exculpatory material that prosecutors are required to provide to defendants in criminal cases. “Additionally, the parties have identified significant reliability issues regarding the most critical pieces of evidence at trial.”

Prosecutors now have 30 days to either drop the charges or ask for a new trial.

“To be clear, the State is not asserting at this time that Defendant is innocent,” the motion said, noting that the investigation into Lee’s killing is ongoing. “However, for all the reasons set forth below, the State no longer has confidence in the integrity of the conviction.”

Lee’s brother, Young Lee, appeared by Zoom at Monday’s hearing. He reportedly said that he felt “betrayed” and “blindsided” by the decision to vacate Syed’s conviction, according to the New York Times.

“This is not a podcast for me,” Lee said, according to the Times. “This is real life — a never-ending nightmare for 20-plus years.”

Lee also said that he was frustrated over the decades-long battle over the case.

“Whenever I think it’s over, and it’s ended, it always comes back,” Young Lee said. “It’s killing me and killing my mother.”

Syed was convicted in 2000 of killing Lee, who had been strangled to death and buried in a Baltimore County park in February 1999. Syed has long insisted on his innocence, and Serial revealed the existence of an alleged alibi witness who had been willing to testify for the defense. The 2014 podcast also raised questions about his defense attorney, M. Cristina Gutierrez, who had not contacted the potential witness. Gutierrez was disbarred in 2001 following complaints from clients over representation and allegations of missing trust account funds. Gutierrez died in 2004.

An appeals court vacated Syed’s conviction in 2018, but the Maryland Supreme Court overturned that ruling the following year. Also in 2019, the Supreme Court refused to take his case.

Syed’s lawyer, Erica J. Suter, brought the case before Phinn under a new Maryland law that allows people convicted of crimes as juveniles to ask that their sentences be modified after they have served 20 years in prison, the Times reported.

Although Mosby’s motion had asked that Syed be released on his own recognizance, Phinn placed him on home detention pending prosecutors’ decision on whether to move for a new trial.

Syed was greeted with celebratory cheers as he left the courtroom on Monday, according to reporting from local ABC affiliate WMAR.