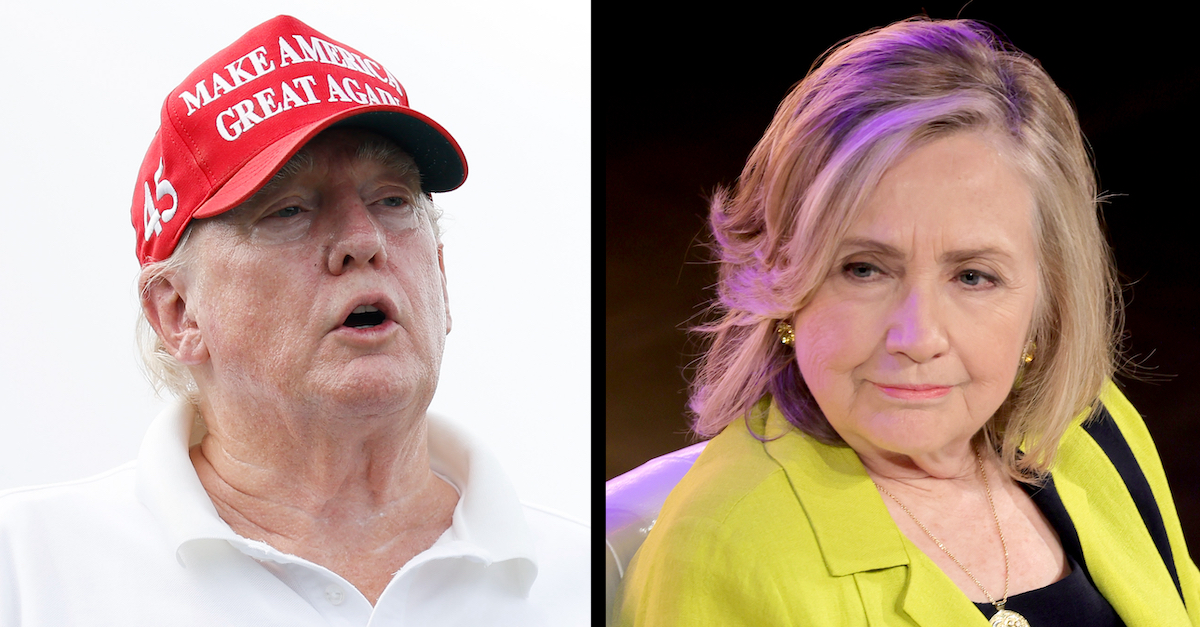 Donald Trump was photographed golfing on July 28, 2022 in Bedminster, New Jersey. Hillary Clinton took part in a panel discussion during BroadwayCon 2022 at The Manhattan Center on July 8, 2022 in New York City. (Photo of Trump by Cliff Hawkins/Getty Images; photo of Clinton by Michael Loccisano/Getty Images.)

Attorneys for Donald Trump on Thursday filed a series of reply motions in an attempt to keep a RICO lawsuit against Hillary Clinton and others alive in federal court.  One of the replies argues, in essence, that the typical statute of limitations shouldn’t apply because Trump spent four years in the Oval Office and couldn’t be bothered to sue some of his own subordinates in the government while he was president.

Trump sued Clinton, her campaign, the Democratic National Committee, Michael Sussmann, and others for allegedly violating racketeering and other laws by conspiring to malign Trump and his campaign during the 2016 election — which he won.  The gravamen of the lawsuit is Trump’s complaint that the defendants cooked up a narrative surrounding Russian collusion and that their collective actions are redressable by a damages payment of $24 million.

The Trump reply seeks to override several defense motions to dismiss the widely criticized case.  The defendants largely argued that the statute of limitations has long since passed for any civil wrongs connected to the 2016 election.

Trump’s attorneys on Thursday evening challenged the defendants to “address the substance” of the claims.

“In their consolidated motion to dismiss, Defendants are heavy on hyperbole and light on substance,” Trump’s attorneys wrote. “Instead, they strain credibility by raising a diatribe of disingenuous arguments which gloss over pertinent facts, distort Plaintiff’s legal theories, and mischaracterize operative case law.”

Trump’s attorneys further argued that the defendants’ filings did little but “divert attention from the validity of Plaintiff’s explosive claims.”  Trump’s team claimed their causes of action were “meticulously sourced and thoroughly pled.”

The usual statute of limitations for RICO claims is four years, but Trump’s attorneys asserted that the usual calculation shouldn’t apply in this case.  That is because they say Trump “was immersed in the diligent execution of his presidential duties during a majority of the relevant time period while Defendants were making every effort to conceal their illicit conduct.”

“Given the novel circumstances at hand, an equitable tolling is warranted for the duration of time that Plaintiff was serving as President of the United States,” Trump’s attorneys also argued.

“Therefore, contrary to Defendants’ contention, Plaintiff’s claims have been asserted in a timely fashion,” Trump’s attorneys further wrote in an attempt to rubbish the statute of limitations defense. “Defendants simply cannot muster a single viable argument as to why any of the claims should be dismissed.”

Elsewhere, Trump’s attorneys asserted that he could not have filed the lawsuit earlier because it “would have been improper for Plaintiff — the head of the Executive Branch and most prominent member of the United States government — to sue his Executive Branch subordinates” such as James Comey, Andrew McCabe, Bruce Ohr, and others.  Doing so could have caused issues, the reply motion claims, with the probe led by Special Counsel Robert Mueller.  Or, perhaps it could otherwise have interfered with “numerous high-profile investigations and proceedings taking place during that time which related to the underlying facts and circumstances” of the matter at bar.

Consistent with this reasoning, Plaintiff should be afforded an equitable tolling in the instant matter as to all applicable statutes of limitations for the duration of time that he was serving as President of the United States. Given the immense and unrelenting demands involved in serving as President, Plaintiff was simply not in a position to commence a lawsuit against Defendants during the time he was in office, particularly not one as complex and wide-spanning as the present action. As a sitting President, Plaintiff tirelessly devoted himself to serving the Nation and ensuring the well-being of the American people. Indeed, it was his obligation and duty – any other course of action would have been “to the detriment of . . . the Nation that the Presidency was designed to serve.” It follows, therefore, that Plaintiff should not be penalized for choosing to forego his own self-interests in favor of fully and faithfully executing his duties as President. It is difficult to envision a more “equitable circumstance” that requires accommodation in “the interests of justice.”

Trump’s attorneys asked U.S. District Judge Donald M. Middlebrooks to toll the statute of limitations the entire time Trump was in office from January 20, 2017 through January 20, 2021.

Clinton’s attorneys previously argued that Trump was aware of all the alleged conspiratorial activity in 2016 — or perhaps in 2017 at the very latest.  Therefore, in their view, the statute of limitations should cause the judge to summarily dispatch the litigation without much additional thought.

Trump’s arguments about the statute of limitations were not the only papers filed on Thursday.  Trump’s lawyers filed a separate document to object to attempts to rubbish the litigation by fired FBI director Comey, fired FBI Deputy Director McCabe, fired FBI agent Peter Strzok, resigned FBI lawyer Lisa Page, and former FBI lawyer Kevin Clinesmith.  Using the Westfall Act, the government certified that Trump sued those defendants — known collectively as the “government defendants” — for alleged acts undertaken within the scope of their employment.  Under the Westfall Act, the government may be substituted as a defendant and an individual employee may be removed from a lawsuit.  Additionally, though tort claims against the government must first pass through individual agencies for review under the Federal Tort Claims Act, Trump’s attorneys moved against the defendants directly in federal court.

Trump’s legal team on Friday argued that the acts of the government defendants were outside the scope of their employment and therefore did not qualify for protection under Westfall Act substitution:

Here, the conduct at issue cannot be “the kind” of conduct the Defendants were employed to perform because it was neither incidental to authorized conduct nor of the same general nature as authorized conduct. Indeed, as detailed below, each individual Defendant acted in a manner that was not . . . intended to further any legitimate law enforcement objectives, but rather, to further his or her own personal interests in impeding Plaintiff’s presidential campaign, and later, undermining his presidency.

Trump’s legal team asserted that it was “not proper for the United States to be substituted for the federal defendants under the Westfall Act as the defendants were not acting within the scope of their employment.”  They asked for limited discovery into the scope of the defendants’ employment and an attempt to litigate the matter at the administrative level as alternatives to dismissal.

Additional reply motions by Trump’s legal team were also filed Thursday.  One asserted that Rodney Joffe could be sued in Florida under RICO law despite his lack of contacts with that jurisdiction.  Another argued that Neustar, Joffe’s company, should be forced to answer the lawsuit because the case allegedly argues “a viable cause of action” against the company.

Neustar argued that it isn’t the proper party for the lawsuit and that another corporation should be sued, but Trump’s legal team disagrees with that assertion.  The response to Neustar’s motion to dismiss explains:

At an absolute minimum, Plaintiff is entitled to discovery on this issue since Neustar has failed to offer even a scintilla of evidence in support of its argument that it is not the proper party.

Dismissing the Amended Complaint against Neustar at the Motion to Dismiss stage, would cause unfair prejudice against the Plaintiff and would prevent the discovery of necessary evidence in this case.

The Amended Complaint alleges that Joffe, used Neustar’s software and infrastructure to hack and access secure databases, and mine DNS traffic for the purpose of obtaining derogatory information regarding Donald J. Trump.  For the purpose of a motion to dismiss, these allegations must be considered as true, and all reasonable inferences should be construed in favor of the nonmoving party. These claims are sufficient and specific enough for the Defendant, Neustar, to respond to, and the motion to dismiss should be denied.

A final reply by Trump’s legal team argues that the lawsuit against Charles Halliday Dolan Jr. should also survive a motion to dismiss.  Similar to the reply as to Joffe, Trump states that Dolan can be sued in Florida under RICO law despite a purported lack of connections to the Sunshine State.

The various documents and some of the exhibits are embedded here: