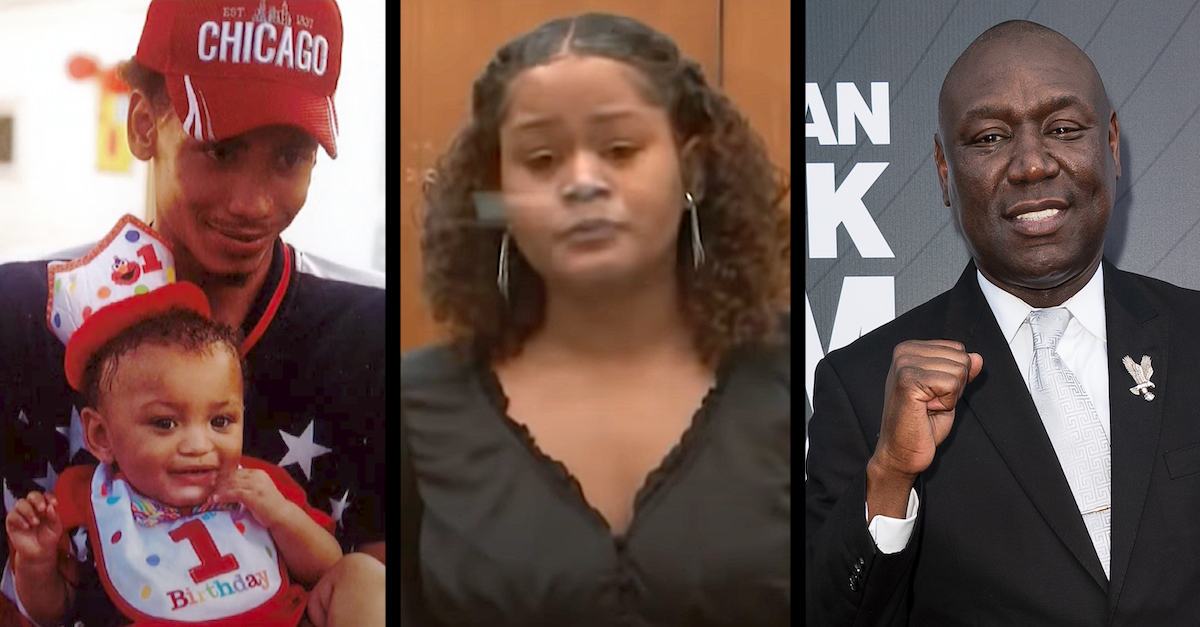 “Of the approximate $1,039,260 raised through GoFundMe and managed by Crump’s law firm, not one single penny has been turned over to Plaintiff for the benefit of Daunte, Jr.,” the lawsuit alleges. “Rather, the entirety of the GoFundMe campaign funds have been directly turned over to Daunte, Sr.’s parents, Katie Bryant a/k/a Katie Wright and Arbuey Wright despite written demands to Defendants through their attorneys.”

The named plaintiff in the case is Chyna Whitaker. The defendants are Crump, Crump’s law firm, both Daunte Sr.’s parents, and an unnamed John Doe.

The lawsuit alleges three counts: promissory estoppel, fraud and misrepresentation, and accounting. It seeks an amount “in excess of $500,000,” a “full and complete accounting” of accounts associated with the GoFundMe fundraiser, attorney’s fees, costs, disbursements, and any other relief the court considers appropriate.

The lawsuit claims Crump “assured” Whitaker “up-front that any GoFundMe monies raised through The Daunte Wright Sr. Memorial Fund would be split 50/50 between Daunte, Jr. and the Wright Family.”

“Daunte, Sr.’s Aunt, Kelly Bryant, who organized the GoFundMe also represented that Daunte, Jr. would receive a portion of these monies,” it also indicates.  “However, this did not happen.”

Rather, the lawsuit claims Katie Bryant and Arbuey Wright “presumably retained” all of the proceeds.

Daunte Jr. was born July 12, 2019. Daunte Sr. was shot and killed by Brooklyn Park, Minnesota Police Officer Kim Potter April 11, 2021. A jury convicted Potter of first-degree manslaughter and second-degree manslaughter; she was sentenced to serve 24 months: 16 months behind bars and the remainder on supervised release.

Whitaker’s lawsuit alleges that Crump made promises that led her to believe she did not need to launch her own fundraiser for Daunte Jr.

Defendants Crump and his law firm only wanted Plaintiff to be involved so that she could bring Daunte, Jr. to garner additional sympathy and outrage from the community to show the general public how this police officer deprived this young child of his father.

There were several family meetings with Crump and his law firm, where numerous cousins, friends, and other relatives attended. Also present were members of the law firm of Newmark Storms Dworak (‘NSD”) of Minneapolis, Minnesota. Together Defendants Crump, Crump Law and NSD held themselves out as legal counsel for Plaintiff from April 12, 2021 until April 15, 2021 when they were terminated.

Ben Crump specifically stated to Chyna Whitaker in the presence of several of her relatives and friends on more than one occasion words to the effect that, “Chyna you are going to receive at least 50% of the GoFundMe proceeds collected that my firm will help set up . . . Don’t worry we are going to make certain that you and your son are taken care of.”

Had Crump not made the above specific statement to Plaintiff, she would have separately set up her own GoFundMe account, which she had a legal right to do.

The lawsuit says the GoFundMe page contained the following description of its goals (the emphases were added in the lawsuit):

“Defendants ALL turned their backs on Plaintiff and her infant son, the sole surviving heir of Daunte, Sr.,” the lawsuit alleges.

A spokesperson for Ben Crump’s law firm released the following statement in response to the filing; it contains a markedly different version of the events:

This is strictly a family dispute between the mother of Daunte Wright’s child and Daunte’s parents, who set up the GoFundMe account in question. Ben Crump Law never handled or controlled the money from this GoFundMe account, which was under the sole direction of Daunte’s parents. Ben Crump Law did not benefit from any of the funds raised, and we did not accept any fee in this case. Our hearts are always with the family, and we pray that they can find resolution.

During victim impact statements delivered after Potter’s conviction, Whitaker said Daunte Jr. was “born 25 weeks premature and had a stay in the ICU for a little over two months.”

“During that time, his father and I were very concerned about him making a full recovery,” she continued. “Kim Potter took my son’s best friend away from him, and things haven’t been the same since then. I’m now a single mother not by choice but by force.”

Whitaker said Daunte Jr. had a “hole in his heart” that could only be filled by seeing his father again. She also said she suffered from PTSD and “extreme anxiety” due to the shooting.

A copy of the lawsuit is below:

[Image of Daunte Sr. and Jr. via an exhibit in the Kimberly Potter trial; image of Chyna Whitaker via the Law&Crime Network; image of Crump via Jason Koerner/Getty Images.]