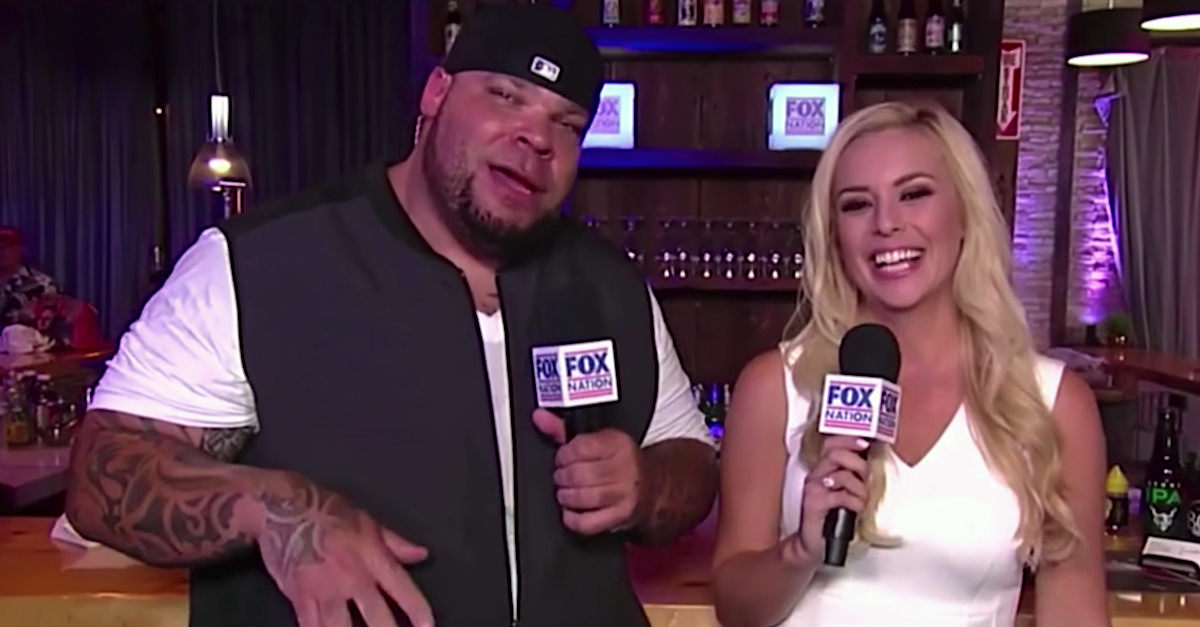 Lawyers defending Fox News in a sexual harassment case filed by Fox Nation commentator Britt McHenry on Friday asked a federal judge to order McHenry to “submit her electronic devices for a neutral forensic examination to determine whether she lost or destroyed text messages critical to her claims.”

The four-page letter to Judge Paul A. Engelmayer follows previous assertions by Fox News that McHenry “lost” the very phone she claims to have used while receiving sexually explicit text messages from co-host George Murdoch (a.k.a. the wrestler “Tyrus”). McHenry is suing the network and several of its executives on allegations that the company retaliated against her when she complained about her communications with Tyrus.

Fox News says the communications McHenry has thus far turned over prove little more than “a consensual exchange of lewd banter, as found by independent investigators.”

“Plaintiff has never produced the actual texts” which led to the litigation, the letter from Fox News to the judge reads. “Instead, she has produced only a ‘log’ of the texts, which are incomplete and cannot be independently verified.”

“Now we know why,” the letter continues. “[A]fter more than a year of litigation, Plaintiff claimed for the first time on January 4 of this year that she ‘lost’ her phone on a trip in July 2019 — six months before she filed this lawsuit. Her repeated offers to allow a forensic examination of her phone were thus based on a long-running pattern of deception involving several misrepresentations to Fox News and this Court. Accordingly, the only way to determine whether relevant texts were lost or deleted is to conduct a full forensic examination of all of Plaintiff’s remaining devices, which may contain backups of the phone that she claims to have lost.”

Fox News says one of its several internal investigations “discovered what appeared to be additional text messages from her to Tyrus that were not in the ‘log’ [McHenry] created.” It also says McHenry also did not initially report her many phone calls with Tyrus. Fox argues that the contents of those voice communications are highly relevant given their proximity to the messages McHenry and her legal team say are evidence of illegal harassment.

According to the document, McHenry hired celebrity attorney Lisa Bloom shortly after the July 2019 trip to Portugal upon which she now claims to have lost the phone. In October 2019, McHenry “made her first offer to conduct a forensic examination of her cell phone, without even hinting that it had been ‘lost,'” the Fox News letter to the judge says.

Over the next year, Plaintiff continued the charade of offering to submit her cell phone for forensic examination, never mentioning that it had been lost. When she filed her Complaint and Amended Complaint, she disingenuously bragged that she had “immediately offered to have a forensic expert examine her cell phone” to confirm her side of the story. At the initial conference in September 2020, Tyrus’ counsel stated her understanding that Plaintiff had “retained [her] messages [with Tyrus] and did not change numbers or cell phones,” and Your Honor emphasized the importance of “preserv[ing] and protect[ing]” those messages. In response, Plaintiff’s counsel gave no indication that the cell phone had been lost. Finally, in responding to Fox News’ request that she conduct a forensic examination of her cell phone in November 2020, she still failed to mention that she had lost the phone.

According to the letter, McHenry “finally confessed” on January 4, 2021 that she “lost” the phone while on a trip to Portugal in July 2019.

Again, from the letter (citations omitted):

Even after finally revealing the phone was lost, Plaintiff continued to obfuscate information about the loss, repeatedly changed her explanations of where the information from the phone may have been backed up, and made but then revoked various offers to conduct forensic examinations. On January 4, 2021, Plaintiff’s counsel stated that they believed all messages with Tyrus had been backed up on Plaintiff’s laptop, and agreed to submit the laptop for examination. However, Plaintiff refused to search for any messages about Tyrus that she had with third parties, even after Fox News explained the importance of those messages. On January 19, Plaintiff attempted to revoke her offer to conduct the forensic examination. On January 27, she revealed that she had discovered an old phone (which she called “Phone 2”) that contains a backup, allegedly created in April 2019, of messages between Plaintiff and Tyrus between late August 2018 and early April 2019. Plaintiff then offered to produce Phone 2 for a forensic examination and withdrew her offer to submit her laptop for examination.

Just two days later, on January 29, 2021, Plaintiff posted a video on Instagram in which she stated, contrary to her counsel’s offer, that she was “more than willing” to submit all of her devices for forensic examination. On February 9, 2021, her counsel finally agreed to do so. Plaintiff still maintained, however, that she would not allow her phone to be searched for any communications with third parties even if they were relevant. She also said that her offer was contingent on Fox News agreeing never to raise the issue of her lost phone with the Court. If Fox News refused to accept these terms, she would not agree to any examination.

“Only a forensic examination will reveal what Fox News strongly suspects: Plaintiff intentionally deleted highly relevant messages between her and Tyrus and/or third parties that would definitively prove that their relationship was consensual and not harassing,” the letter continues.

Fox is asking the judge to force McHenry to submit her “laptop, Phone 2, and any other communications devices she used” to a “neutral forensic examination,” which Fox argues McHenry “has effectively conceded . . . is appropriate” in her case.

Law&Crime reached out to Lisa Bloom’s law firm for reaction to the Fox News letter.

“Ms. McHenry has offered her devices to be forensically examined because she has nothing to hide,” said Managing Attorney Arick Fudali in response to Fox’s claims.

Fudali’s response mirrors previous comments from Bloom herself about the matter.

“Britt has already provided all of the relevant text messages, which she downloaded before she lost her phone, to the investigators and in discovery,” Bloom told Law&Crime on Jan. 21. “We have also offered a forensic examination of her laptop and cloud to obtain any and all messages between her and [Tyrus]. She has nothing to hide.”

In a Jan. 27 letter from the Bloom Firm to Fox’s attorneys, Fudali explained a summary of his client’s position:

Read the letter motion and the attached exhibits below: