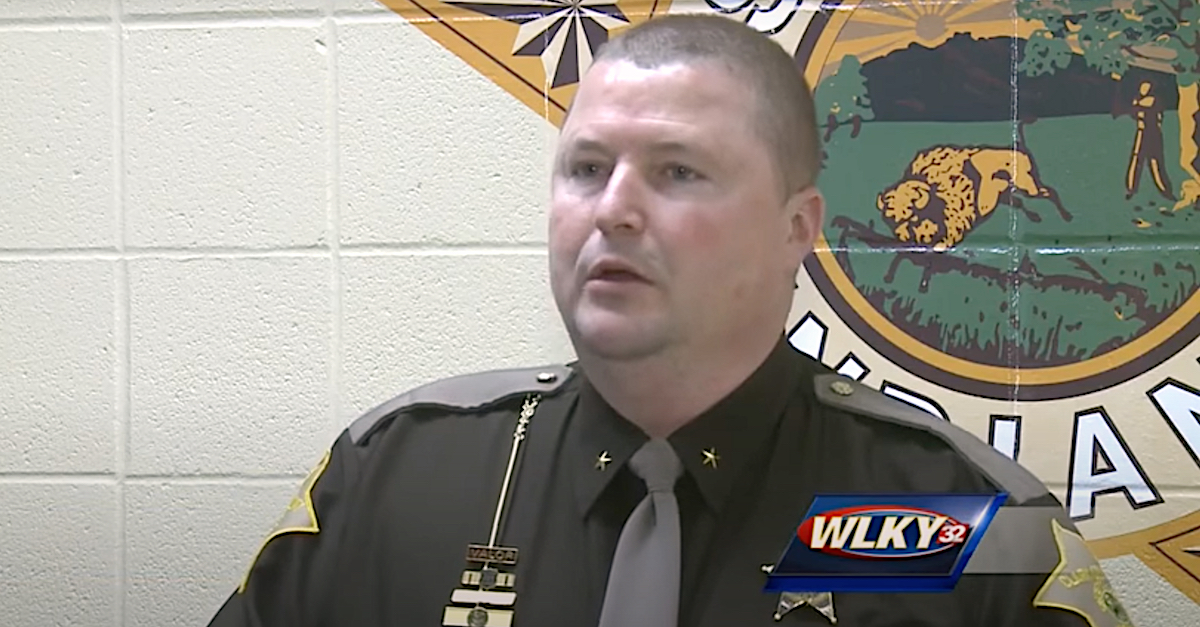 Clark County Sheriff Jamey Noel appears in a WLKY-TV screengrab from 2016; he was discussing A+E’s ’60 Days In.’

At least 28 women have filed federal civil rights lawsuits alleging they were attacked, harassed, and sexually assaulted in a southern Indiana jail after an officer sold access to the woman’s wing of the lockup facility. Several additional plaintiffs are said to be on the way.

One complaint alleges that “multiple female inmates of the Clark County Jail” were assaulted by male inmates on the night of Oct. 24, 2021 and names Clark County Sheriff Jamey Noel as the lead defendant. Also named is the since-fired employee who allegedly provided access by way of selling a key for $1,000. Several currently unidentified members of the sheriff’s department are also in the lawsuit’s crosshairs.

“The males threatened, assaulted, and raped the females over the course of multiple hours,” the first lawsuit filed last month on behalf of 20 women says. “The male inmates gained access to the females pods through use of a key provided by corrections officer David Lowe. As a direct and proximate cause of the actions of Defendants, [the female inmates] suffered horrific physical and psychological injuries.”

The newer lawsuit, filed Monday, says the incident began on the night of October 23, 2021 and carried on into the early morning hours of the next day — “resulting in significant physical and emotional injuries.”

“Amazingly, even though there were surveillance cameras positioned in locations that showed the male detainees accessing the woman’s Pods, and even though the incident involved multiple male detainees and dozens of victims over an extended period of time, not a single jail officer on duty that night came to the of Plaintiffs and the other victims,” the newer lawsuit alleges.

Attorney William McCall, who represents some of the plaintiffs, told Law&Crime in a phone call that the attacks only came to light after one woman, who is a party to the lawsuit, complained about the incident and was then moved to a different jail. That woman became pregnant as a result of being raped on the night in question, the attorney said, and later miscarried after she bonded out of custody.

McCall said that most of the female inmates were left “cowering under bunks” or “hiding in bathrooms” on the night of the attack but allowed that at least some of the incarcerated women were “willing participants” who welcomed their boyfriends over to the pod.

One of the women who was sexually assaulted that night but is not a party to the lawsuit, McCall said, was a virgin and is a lesbian. She is currently suffering from severe mental and physical maladies as a result of the attacks, the attorney said, and has declined to file a claim because she doesn’t want to relive the horrific experience.

“To be just minding your own business, and then all hell breaks loose,” McCall mused. “Men were taunting and shaking themselves at women.”

The attorney went on to describe scenes in which the male inmates demanded oral sex from the female inmates.

“How do they fail to notice so many male inmates moving around like this?” McCall asked out loud. “It just boggles the mind.”

After finally stopping the attack by pushing a call button, the victims were immediately punished by jail staff by losing their “dark” privileges so that “the lights remained on in the female pods for the next 72 hours,” the older lawsuit says.

“Rather than support the victims who were subject to sexual assault and abuse, Jail officials punished the women after the incident,” the latest lawsuit similarly alleges.

On top of losing “dark” privilege, the filing alleges, the victims were placed on “lockdown,” denied normal privileges, and had personal property like “pillows, blankets and personal hygiene items” confiscated.

According to McCall, many of the women who were attacked were later interrogated by sheriff’s department investigators and “treated like they were the perpetrators.” Investigators grilled the victims and asked questions that made them feel like they were responsible for the incident, the attorney said.

The named plaintiffs, which currently stand at 20, were “struck by the sheer level of fear,” McCall said, and currently experienced post-traumatic stress disorder-like symptoms. At least “two or three more” women are currently slated to be added as plaintiffs to the lawsuit, the attorney asserted.

The jail itself participates in a reality television show called 60 Days In where volunteers pretend to be incarcerated in a form of misery tourism for third party consumption on basic cable.  The show airs on the A+E Network.

“Ironically,” McCall said, “Strategic cameras [for the show] were left in the jail on the day it happened but didn’t pick it up despite the banging on the walls and the screams.”

“We’re hopeful that video exists and has not been disappeared,” the attorney added.

According to Indianapolis FOX affiliate WXIN, Lowe currently faces charges of trafficking with an inmate, aiding escape and official misconduct. His criminal trial is currently scheduled for November of this year.

That statement, reproduced in its entirety, reads:

The events of October 23rd were the result of the unforeseeable criminal actions of a rogue corrections officer. The individual in question chose to abandon his training, ethics and morals and made the unilateral decision to mortgage his career and future by allowing inmates access to the jail keys.

The jail command became aware of what had taken place when a lawyer called and reported that his client had informed him that male inmates had obtained keys and had entered the women’s pod the evening before. When this report was received an immediate investigation began. The investigation included a complete review of all the security video, recorded interviews with corrections officers, male inmates and over 40 female inmates.

In less than 48 hours from the report David Lowe was taken into custody for his illegal conduct. However, the investigation did not end with the incarceration of Lowe but continued. The Sheriff’s Detective Division has continued to interview female inmates who were present in the pod that evening and these interviews have yielded information that is in direct opposition to the allegations made in the civil lawsuit. Further, the investigation seems to indicate that there was a systematic plan by individuals who were incarcerated that evening to develop the narrative that makes up the crux of the claims in the civil case.

The Clark County Sheriff and his office takes this matter seriously and continues to investigate what happened during that period of time. The safety, welfare and dignity of the inmates at the jail is important and the Sheriff has responded to the information gained from this investigation by making immediate changes to the physical structure of the jail as well as reviewing procedure and practices. This investigation is not over and the Sheriff is committed to insuring that nothing of this magnitude or scope every occurs again. However, the Sheriff is equally committed to defending those untruths that have been alleged by those who are attempting to reap financial gain from the crimes of David Lowe.

Both lawsuits can be read in full below:

Editor’s note: this article has been amended post-publication to include a response from the CCSO.