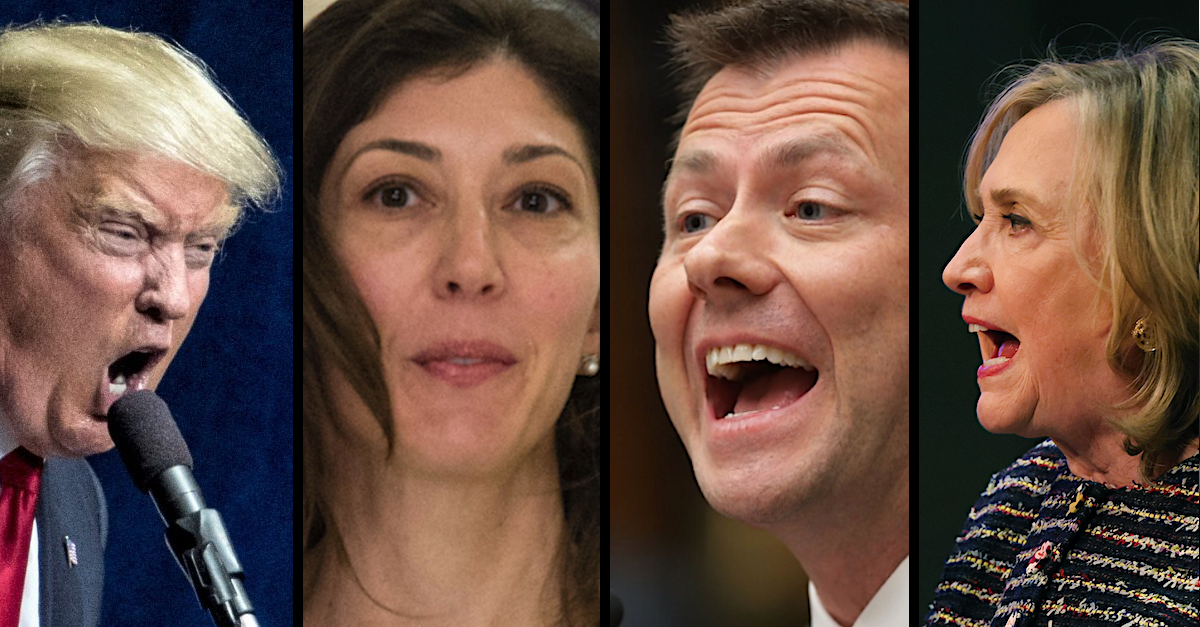 Among a flurry of legal filings on Thursday and Friday were two notable details in Donald Trump’s sprawling RICO civil lawsuit against Hillary Clinton and a variety of other defendants, including Lisa Page and Peter Strzok.

The first detail is this:  Trump’s layers said they were struggling to serve copies of the lawsuit, which attempts to assert a vast conspiracy existed against Trump’s 2016 presidential win, upon Page and Strzok.

The Plaintiff has attempted service unsuccessfully six (6) times on the Defendant, Lisa Page, with the most recent attempt on June 30, 2022. In the interim, a copy of the Complaint and Summons was sent via certified mail to the Attorney General and the United States Attorney for the Southern District of Florida (Anthony Erickson-Pogorzelski), with both return receipts dated on May 2, 2022. Moreover, today, counsel for the Plaintiff spoke to Attorney Stephen R. Terrel, who is an attorney with the United States Department of Justice, representing the United States current and former Federal Employees. Mr. Terrel is unable to accept service on behalf of Lisa Page, but did assist in providing the lawyer, law firm, who has represented Lisa Page, previously. As such, counsel for the Plaintiff has sent an email to the counsel, requesting if she will accept service of process on behalf of her client. If service is accepted, the Plaintiff will provide an updated Status Report to the Court.

As to Strzok, a similar thread:

The second detail — or details, we should say — involves deadlines for important responses to Trump’s recently expanded Amended Complaint.

U.S. District Judge Donald Middlebrooks refused on Friday to allow attorneys to proceed on the following timetable in the case, which was jointly stipulated by both Trump’s attorneys and Clinton’s attorneys:

It is not uncommon for adverse litigants to agree to afford one another leeway to ponder, postulate, and pontificate their arguments during litigation, especially complex litigation, the Rules of Civil Procedure not withstanding. Here, Trump ballooned the size of the original 108-page March 24 lawsuit via the filing of a 193-page Amended Complaint on June 21, thus necessitating the aforementioned additional responses by the many defendants.

Regardless, the proposed timetable, despite its collective acceptance by the many adverse parties, was not agreeable to Judge Middlebrooks. While the judge noted that “[t]he twenty-three non-federal defendants are attempting, insofar as possible, to consolidate their responses,” that did not necessarily warrant a delay:

Motions for extension of time must establish good cause supported by specific facts. While I appreciate Defendants’ efforts to streamline the briefing in this matter, these efforts do not constitute good cause to extend the response deadlines. This case has been pending for several months already, and it is in the interest of both the Parties and this Court to resolve it as expeditiously as possible. Moreover, Plaintiffs Amended Complaint did not significantly alter the allegations as to most Defendants, and the arguments in support of dismissal of the Amended Complaint should therefore be substantially similar to the arguments in support of dismissal of Plaintiffs original Complaint. As such, I am strongly disinclined to further extend any deadlines.

In short, Middlebrooks said most of the defense arguments in support of scuttling the litigation have been on the record for quite some time and may need only minor refinements in order to address the Amended Complaint.

“The many experienced lawyers involved are working hard to submit to the Court a streamlined motion, which should save the Court and counsel time,” Clinton’s attorneys wrote.  “A short two-week continuance will give adequate time for all counsel to give appropriate consideration and input.”

Defendant Clinton requests a two-week extension of Defendants’ deadline to respond to Plaintiff’s Amended Complaint (DE 177), citing that the intervening Fourth of July holiday has complicated communications among the various defense counsel in this matter. Plaintiff does not oppose the relief requested. Based on the holiday, and in the interest of allowing Defendants to file a streamlined Motion, I find good cause to grant Defendant Clinton’s Motion in part. Accordingly, Defendants’ deadline to respond to the Amended Complaint is extended to July 14, 2022.

A collection of other defendants and the United States government (which is a non-party to the case) asked for additional time to respond to Trump’s Amended Complaint on other grounds:  namely that the case needs to be reviewed under the Federal Tort Claims Act (“FTCA”) and the Federal Employees Liability Reform and Tort Compensation Act of 1988 (“Westfall Act”).

A single brief would be able to articulate the interests of defendants James Comey, Andrew McCabe, Peter Strzok, Lisa Page, Kevin Clinesmith, Bruce Ohr, Rod Rosenstein, and Adam Schiff, according to that document.

The judge has not ruled on that particular request, which aimed for a Sept. 6 deadline.

The docket currently indicates that all of the defendants’ responses are due July 14.

This is also not the first time Middlebrooks has attempted to scurry along the litigation, as Law&Crime has reported in the past.  Trump’s attorneys have also requested the court’s benevolence in their attempts to remedy issues with the original complaint via the filing of the Amended Complaint.

Trump’s original filing was described by Law&Crime as an “archlawsuit of grievances against myriad actors associated with the Democratic Party, the FBI, and Russiagate.”  The claims have been skewered by critics, and the defendants have rather uniformly asserted that all or most of Trump’s claims are time-barred by a statute of limitations.  Those that aren’t time-barred should fail as a matter of law, several of the defendants have asserted.

In the run-up to the 2016 Presidential Election, Hillary Clinton and her cohorts orchestrated an unthinkable plot – one that shocks the conscience and is an affront to this nation’s democracy. Acting in concert, the Defendants maliciously conspired to weave a false narrative that their Republican opponent, Donald J. Trump, was colluding with a hostile foreign sovereignty. The actions taken in furtherance of their scheme — falsifying evidence, deceiving law enforcement, and exploiting access to highly-sensitive data sources — are so outrageous, subversive and incendiary that even the events of Watergate pale in comparison.

Under the guise of ‘opposition research,’ ‘data analytics,’ and other political stratagems, the Defendants nefariously sought to sway the public’s trust. They worked together with a single, self-serving purpose: to vilify Donald J. Trump. Indeed, their far-reaching conspiracy was designed to cripple Trump’s bid for presidency by fabricating a scandal that would be used to trigger an unfounded federal investigation and ignite a media frenzy.

Trump says he lost millions due to the alleged conduct of the many named defendants — and some others he lists only as anonymous alleged bad actors. Among the causes of action listed are alleged RICO law violations, RICO conspiracy, injurious falsehood, malicious prosecution, theft of trade secrets, and violations of the Stored Communications Act.  RICO is the legal acronym for Racketeer Influenced and Corrupt Organizations.

Some of the recent paperwork is below: