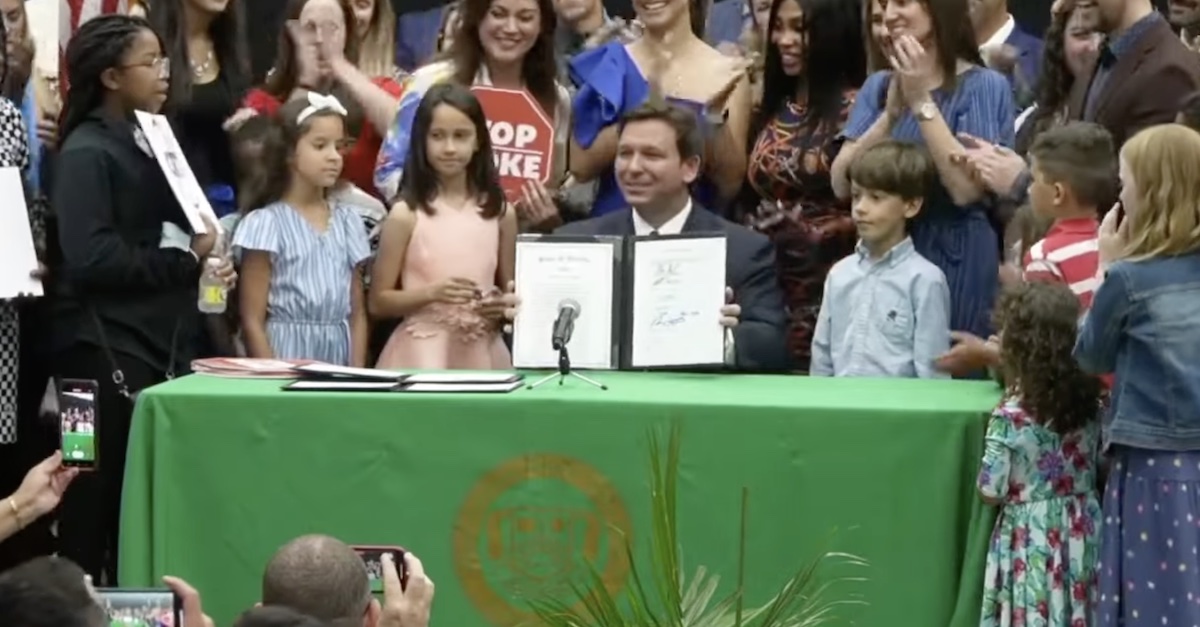 The ACLU filed a lawsuit Thursday on behalf of “[i]nstructors and students at Florida colleges and universities” who say that the “Stop WOKE Act” signed into law in April by Gov. Ron DeSantis (R) amounts to unconstitutional “racially motivated censorship.”

The Stop the Wrongs Against Our Kids and Employees Act, plaintiffs allege, was supported by the Republican-controlled legislature to “stifle widespread demands to discuss, study, and address systemic inequalities, following the nationwide protests that provoked discussions about race and racism in the aftermath of the murder of George Floyd.”

The suit was filed against the Florida Board of Governors of the State University System, its various members, and several university boards of trustees.

The first four plaintiffs named above are Black professors who argued that the law will affect their ability to teach freely about about privilege, racism, and Critical Race Theory; Dauphin, a Black student, said two courses about race she’s enrolled in may be negatively affected, and that this will “stymie her educational enrichment and post-graduate future, and minimize and/or ignore her lived experience as a Black woman.”

“I fear that this law will cause my professors to avoid discussing race and gender altogether, which will result in my perspective and lived experience as a Black, female student being effectively minimized and erased in the classroom,” Dauphin said in a statement. “As a student, I deserve to see myself and the issues that impact me — including issues around race and gender — reflected in my classroom discussions.”

The lawsuit said the academics fear the damage to courses will be far-reaching.

“In place of free and open academic inquiry and debate, instructors fear teaching topics of oppression, privilege, and race and gender inequalities with which the legislature disagrees and feel compelled to curtail their course offerings and classroom discussions to avoid punishment,” the lawsuit said. “The Stop W.O.K.E. Act explicitly threatens race and gender-based speech, impacting a wide array of courses, in the humanities and beyond.”

Alleging violations of the First and 14th Amendments, plaintiffs argued that one need look no further than name of the bill itself to understand that it is “unconstitutional.”

“The Stop W.O.K.E. Act’s title makes no attempt to hide its unconstitutional purpose,” the filing said, before citing the Oxford English Dictionary definition of “woke.” “‘Woke’ speech is defined as ‘alert to racial or social discrimination or injustice,’ and has been characterized by the legislature as speech concerned with civil rights, ‘privilege’ and ‘oppression,’ and even more broadly, ‘systemic racism.’ Governor DeSantis claimed that the Act was necessary to create a ‘woke-free state of Florida.’”

According to the bill’s text, “[i]t shall constitute discrimination on the basis of race, color, national origin, or sex under this section to subject any student or employee to training or instruction that espouses, promotes, advances, inculcates, or compels such student or employee to believe” the following:

The plaintiffs, who are seeking preliminary and permanent injunctive relief to block enforcement of the “Stop WOKE Act,” asked the court to declare the legislation unconstitutional on its face.

Also of note on Thursday in a separate case: a federal judge referenced Stranger Things in granting a preliminary injunction blocking enforcement of portions of the “Stop WOKE Act,” referred to in his decision as the Individual Freedom Act.

“Now, like the heroine in Stranger Things, this Court is once again asked to pull Florida back from the upside down. Before this Court is a motion for a preliminary injunction, asking this Court to enjoin a host of Government officials from enforcing portions of the Individual Freedom Act—a law that prohibits employers from endorsing any of eight concepts during any mandatory employment activity,” wrote Chief U.S. District Judge Mark E. Walker. “Because the challenged provision of the Act is a naked viewpoint-based regulation on speech that does not pass strict scrutiny, Plaintiffs’ motion for a preliminary injunction, ECF No. 18, is GRANTED in part.”