Biden Admin Sues Texas Over Redistricting Maps that Aim to Cement White ‘Anglo’ Minority’s Political Power for a Decade at the Expense of Black, Asian, and Latino Voters | Law & Crime

Biden Admin Sues Texas Over Redistricting Maps that Aim to Cement White ‘Anglo’ Minority’s Political Power for a Decade at the Expense of Black, Asian, and Latino Voters 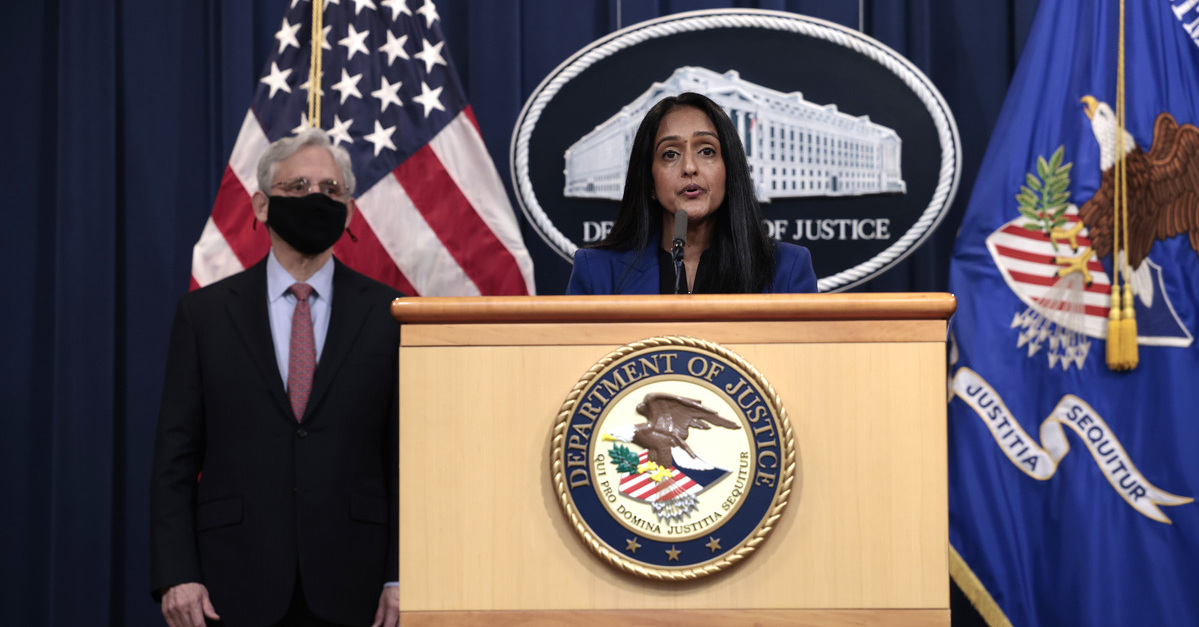 WASHINGTON, DC – DECEMBER 06: Associate Attorney General Vanita Gupta speaks at a press conference at the Department of Justice on December 06, 2021 in Washington, DC. Gupta and Attorney General Merrick B. Garland held the press conference to announce that the Justice department was suing Texas over their recent redistricting which the department says violates the Voting Rights Act.

The U.S. Department of Justice on Monday sued Texas and its Secretary of State John Scott (R) over newly proposed redistricting maps because of the way Black, Asian and Latino votes are diluted in order to facilitate white, minority rule over the Lone Star State.

“The 2020 Census confirmed that Texas is one of the most diverse states in the nation,” the lawsuit begins. “Anglos—i.e., non-Latino White Texans—are now less than 40 percent of the State’s population, and Latinos soon will be the State’s largest population group. Between 2010 and 2020, Texas grew by nearly 4 million residents, and the minority population represents 95% of that growth.”

The lawsuit provides a detailed accounting of those numbers:

“The 2021 Congressional Plan results in a denial or abridgement of the right of citizens of the United States to vote on account of race, color, or membership in a language minority group,” the lawsuit says.

According to the filing, the GOP-dominated Texas Legislature “refused to recognize” the Lone Star State’s “growing minority electorate” by rewarding “Anglo voting majorities” with those two new congressional seats. The new maps, the DOJ says, will result in particularly dire outcomes for non-white voters in West Texas, the Dallas-Fort Worth Metroplex, San Antonio and Harris County, where the sprawling, booming and fast-growing City of Houston is located.

The lawsuit highlights the racial logic of those redrawn maps:

Texas…intentionally eliminated a Latino electoral opportunity in Congressional District 23, a West Texas district where courts had identified Voting Rights Act violations during the previous two redistricting cycles. It failed to draw a seat encompassing the growing Latino electorate in Harris County. And it surgically excised minority communities from the core of the Dallas-Fort Worth Metroplex (DFW) by attaching them to heavily Anglo rural counties, some more than a hundred miles away, placing them in a congressional district where they would lack equal electoral opportunity.

Texas also eliminated Latino electoral opportunities in the State House plan through manipulation or outright elimination of districts where Latino communities previously had elected their preferred candidates. In the San Antonio region and in South Texas, Texas replaced Latinos in House Districts 118 and 31 with high-turnout Anglo voters, eliminating minority electoral opportunities. And in El Paso and West Texas, the State eliminated a Latino opportunity district entirely—reducing the number of districts in which Latinos make up a citizen voting-age population majority from six to five—by overpopulating and packing majority-Latino districts and under-populating nearby majority-Anglo districts.

For those familiar with Voting Rights Act litigation or gerrymandered redistricting efforts in the states of the former Confederacy, none of this is new. The lawsuit takes note of such history.

During a press conference, Associate Attorney General Vanita Gupta made sure to repeat Texas’s long history of systemic racism in its redistricting processes.

“This is not the first time that Texas has acted to minimize the voting rights of its minority citizens,” she said. “Decade after decade, courts have found that Texas has enacted redistricting plans that deliberately dilute the voting strength of Latino and Black voters and that violate the Voting Rights Act.”

“As the Supreme Court has observed, a core principle of our democracy is that ‘voters should choose their representatives, not the other way around,'” Attorney General Merrick Garland said in introductory remarks at the press conference. “Section 2 of the Voting Rights Act requires that state voting laws – including laws that draw electoral maps – provide eligible voters with an equal opportunity to participate in the democratic process and elect representatives of their choosing.”

The DOJ is asking for the court to invalidate the propose Texas maps, enjoin them from being used, issue interim maps and force Texas authorities to go back to the drawing board in order to create maps that comply with Section 2 the VRA.