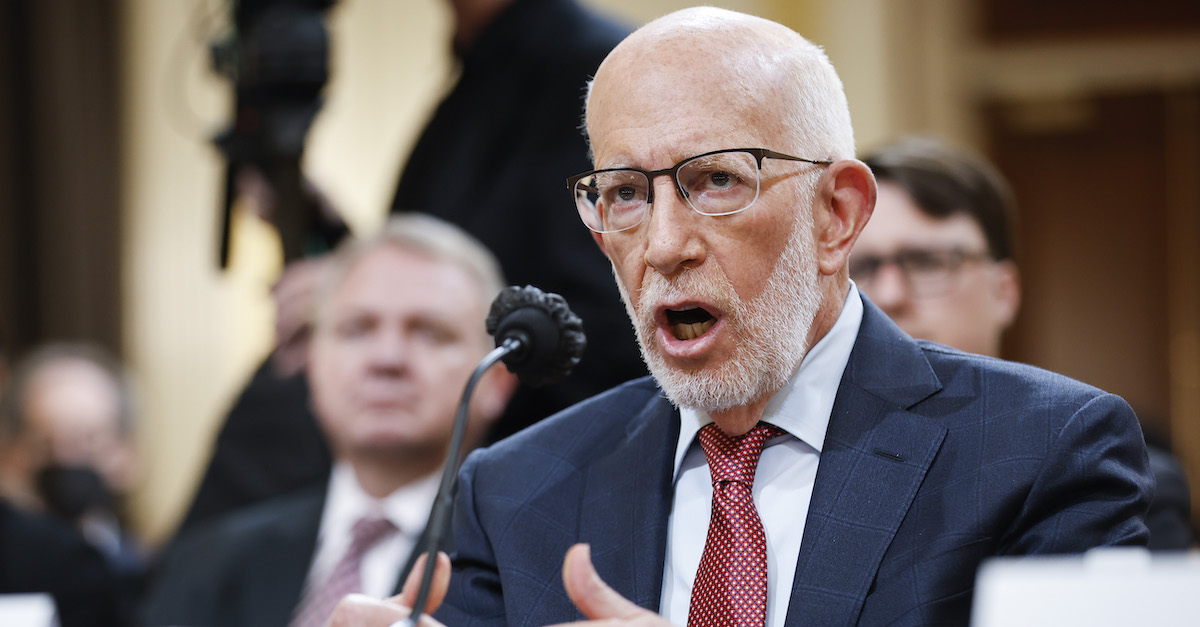 WASHINGTON, DC – JUNE 13: Republican election attorney Benjamin Ginsberg testifies during a hearing by the Select Committee to Investigate the January 6th Attack on the U.S. Capitol in the Cannon House Office Building on June 13, 2022 in Washington, DC. (Photo by Chip Somodevilla/Getty Images)

The attorney whose Supreme Court litigation  put George W. Bush in the White House joined the long procession of top Republican lawyers telling the Jan. 6 Committee that former President Donald Trump lost the 2020 election—and it “was not close.”

Benjamin Ginsberg is well-known for his fierce pursuit of litigation in support of Republican candidates. As Law&Crime previously reported, he has spent four decades in the field of election law, often searching for evidence of widespread voter fraud—and coming up empty. He played a key role in the Florida recount in the 2000 presidential election that led to the Supreme Court decision in Bush v. Gore that ultimately resulted in the younger Bush’s presidency.

His role in Monday’s hearing before the House Select Committee to Investigate the Attack on the U.S. Capitol was to offer some perspective and context for the dozens of cases brought by lawyers for Trump in the weeks following the 2020 election.

As Rep. Zoe Lofgren (D-Calif.) noted, Trump’s team had brought 62 lawsuits, 61 of which were dismissed. The remaining lawsuit, Lofgren said, resulted in a “single victory” that didn’t affect the outcome for either candidate.

“They Did Have Their Day in Court.”

After referring to Ginsberg as a “renowned legal expert,” Lofgren started off by asking Ginsberg about the “normal process” for post-election litigation.

Ginsberg said that normally, a campaign will analyze precinct results and look for abnormalities in results. If any are found, the campaign would send representatives to those precincts to ask questions, Ginsberg said, adding that all campaigns have poll watchers and poll workers observing the polling places.

Ginsberg noted that before the 2020 election, the Trump campaign had talked about having some 50,000 poll workers, so presumably there was already a Trump campaign presence in many locations.

“The Trump campaign had a couple of basic problems, however,” Ginsberg said.

Ginsberg also recalled that Trump campaign officials didn’t believe the claims of fraud because there wasn’t evidence to support them.

“Are you aware of any instance in which a court found the Trump campaign’s fraud claims to be credible?” Lofgren asked.

“No, there was never that instance,” Ginsberg replied. “In all the cases that were brought—60 cases, with more than 180 counts—the simple fact is that the Trump campaign did not make its case.

“Despite those 61 losses, the Trump campaign said that courts didn’t hear them out,” Lofgren said, and asked Ginsberg for his opinion on the Trump team’s complaint that it didn’t have its day in court.

“They did have their day in court,” Ginsberg said, noting that half the cases were dismissed due to procedural issues, such as standing, or insufficient evidence to even bring a claim.

As to the other cases—those that did look at the merits—Ginsberg said that “in no instance did the courts find that the charges of fraud were real.”

Ginsberg noted that in addition to the lawsuits, there have been post-election reviews in the six so-called battleground states—including what he called the “farcical CyberNinjas campaign” in Arizona—that have similarly concluded that the results were not going to change.

“In each one of those instances there was no credible evidence of fraud produced by the Trump campaign or his supporters,” Ginsberg said.

“A Coup In Search of a Legal Theory.”

Her questioning of Ginsberg completed, Lofgren noted that more than 60 judges in nine states have dismissed Trump’s election claims, including 24 elected or appointed Republican state judges and 22 federal judges appointed by Republican presidents—10 of those by Trump himself.

At least 11 lawyers have been referred to disciplinary proceedings “due to bad faith and baseless efforts to undermine the outcome of the 2020 election,” Lofgren said, including Rudy Giuliani, whose law license has been suspended in New York and may be permanently suspended in Washington, D.C.

“As we’ve just heard from perhaps most preeminent Republican election lawyer in recent history, the Trump campaign’s unprecedented effort to overturn its election loss in court was a deeply damaging abuse of the judicial process.”

Quoting U.S. District Judge David Carter—a Bill Clinton appointee who earlier this year found that Trump’s effort to stop Congress from certifying the election results may have been criminal—Lofgren said Trump’s litigation was “a coup in search of a legal theory.”

Lofgren said that while election litigation efforts don’t normally continue past a “safe harbor” date of Dec. 14 following an election, Trump kept going with the lawsuits in an effort to continue raising funds as part of what she described as “the Big Rip-off.”