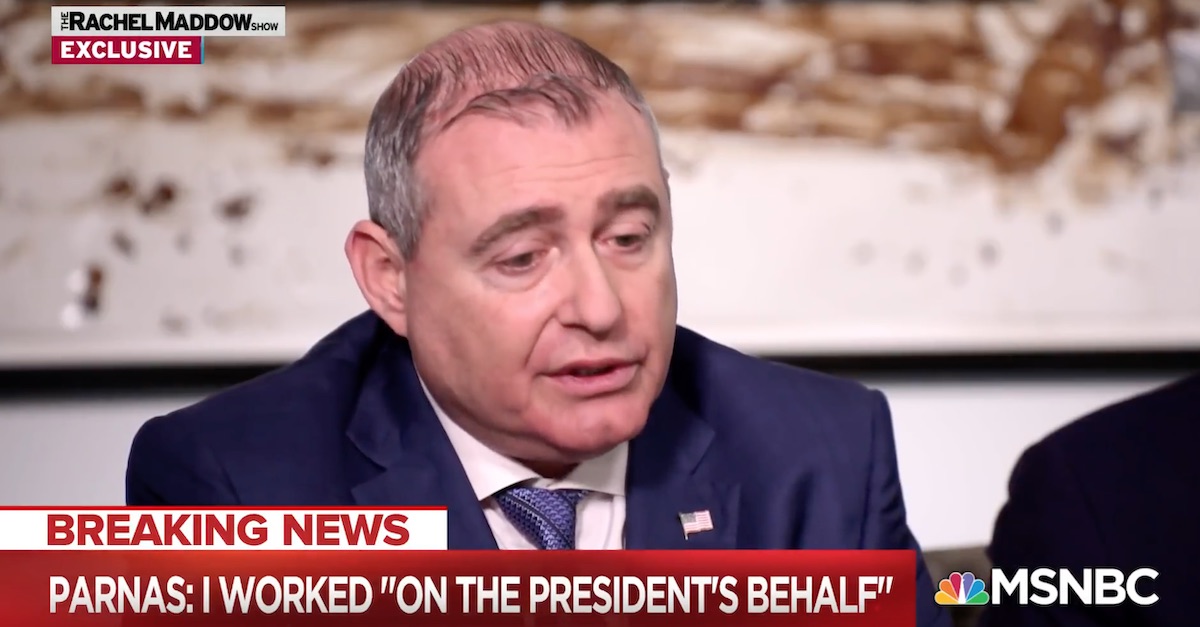 Indicted Rudy Giuliani business associate Lev Parnas, much like Michael Cohen, isn’t a person one should blindly trust as truthful. Parnas has been accused of committing multiple federal crimes, and telling people what they want to hear is an easy way to make people forget that. On the other hand, Parnas clearly does have receipts on the Ukraine affair and shouldn’t be completely dismissed, as the White House plans to do.

We already know where President Donald Trump stands on John Bolton’s testimony, but the Wall Street Journal, citing “people working with the [Trump impeachment] legal team,” reported Monday that the White House will do what it can to ensure Parnas’s testimony isn’t included at the impeachment trial in the Senate:

White House officials would also block any attempt to include testimony from Lev Parnas in the Senate trial, the people said. Mr. Parnas, an associate of Rudy Giuliani, the president’s personal attorney who was working on his behalf in Ukraine, offered new allegations last week that have inflamed the debate about whether senators should call witnesses in the president’s trial, which opens Tuesday.

On what legal basis? There can be none, says Supreme Court lawyer Neal Katyal.

On what possible legal basis? The venerable “the defendant is scared of actual evidence” rule?

But the White House and Senate Majority Leader Mitch McConnell (R-Ky.) are openly coordinating on all things impeachment trial. Witnesses Democrats want to testify will be subject first to a vote in the Republican-controlled Senate, and there’s no guarantee that the Senate will vote to include Parnas’s testimony in the trial.

After months of a holding pattern given the ongoing criminal case against him in the Southern District of New York, Parnas sent the news cycle into overdrive when he appeared on cable news networks for interviews. In those interviews, he said that Trump — and many others — “knew exactly what was going on” in Ukraine, namely: efforts to get former U.S. ambassador to Ukraine Marie Yovanovitch fired; efforts to dig up dirt on the Bidens; efforts to get Ukraine to announce investigations of the Bidens.

“[Trump] was aware of all of my movements. I wouldn’t do anything without the consent of Rudy Giuliani or the president,” he said.

Parnas’s attorney Joseph Bondy frequently uses the hashtag #LetLevSpeak on Twitter. He did so as recently as Sunday when demanding that witnesses be called and asking, “What does @GOP fear?”

Law&Crime reached out to Bondy for comment about the White House’s plan to block Parnas’s testimony. We will update this story if we receive a response.