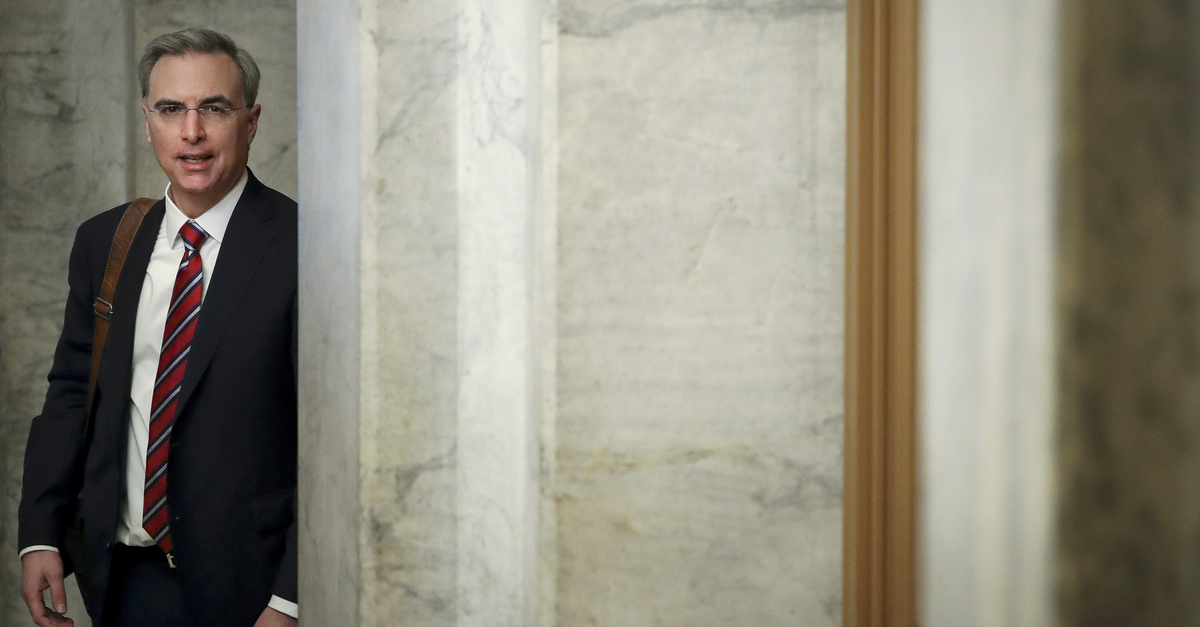 Pat Cipollone, President Donald Trump‘s lead defense attorney in the Senate impeachment trial, lied to lawmakers and the world during his opening remarks on Tuesday. Now, people are calling for Cipollone to be be disbarred.

“Not even Mr. [Adam] Schiff’s Republican colleagues were allowed into the SCIF,” Cipollone said.

A SCIF is essentially a place where purportedly classified information is relayed to interested and acceptable parties. The acronym stands for Sensitive Compartmented Information Facility. But, contrary to Cipollone’s assertion, Republicans were regularly allowed into the SCIF while members of the House Intelligence, Oversight and Foreign Affairs Committees heard impeachment witness testimony last year. Members from both sides of the aisle, and counsel for each party, were also allowed to ask the witnesses questions behind closed doors.

Outrage about Cipollone’s inaccurate statement went viral and many critics were quick to call for the credential-surrendering version of the White House counsel’s head.

“Cipollone must be forced by [Chief Justice John] Roberts to correct the record and apologize or face disbarment for brazen lack of candor to the tribunal in a legal proceeding,” he said. “I was in nearly every deposition and the GOP Members were always present.”

“No question [Rep. Raskin] is right” Tribe tweeted. “Cipollone must correct his lie or face disbarment.”

So, did Cipollone run afoul of his obligations as an attorney under the rules governing the behavior of U.S. attorneys? Law&Crime reached out to Citizens for Responsibility and Ethics in Washington (CREW) for some insight into Cipollone’s alleged ethical lapse on the floor of the U.S. Senate.

CREW Deputy Director Donald Sherman said it was premature for the anti-corruption and pro-transparency organization to commit to any kind of efforts at forcing a sanction on Cipollone via bar complaint or otherwise–but insisted that the behavior on display did not augur well for President Trump.

“It’s certainly a big deal any time an office of the court makes deliberate false statements in front of a tribunal,” Sherman said. “It’s something we are concerned about and are looking at. I can’t say what if any formal steps [CREW] would take about it. But Rep. Raskin and Professor Tribe are right in their assessment and right to be concerned about it.”

Sherman elaborated on the upshot of Cipollone’s statment:

More importantly, I think it speaks to the credibility of the president’s lawyers, on an ongoing basis, in this impeachment trial. I would put it his way: If I were Cipollone’s client, I would be incredibly concerned about my lawyer making false statements to a tribunal about an issue that’s not even relevant to the underlying facts. This has nothing to do with the articles of impeachment and there’s no real reason for Cipollone to have made this up. Especially, when his statement appears to be demonstrably inaccurate.

But just because CREW doesn’t currently have plans to litigate Cipollone’s one-off lie doesn’t mean the group is resting on its laurels. If anything, the Republican lawyer’s obvious fib put something of a laser-guided target on him.

“At CREW, I would want to see how the rest of this process plays out,” Sherman told Law&Crime. “It could happen again. I don’t expect him to be fired any time soon. I want to keep watching to see what else he has to say and see if he makes any other statements that turn out to be demonstrably inaccurate.”