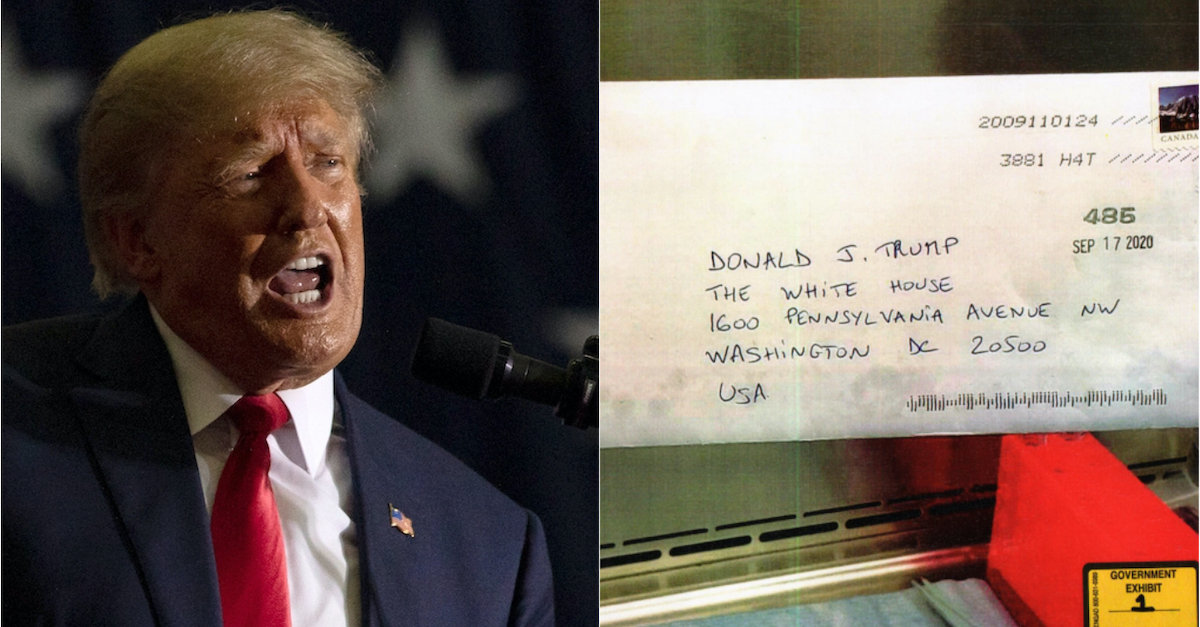 Former President Donald Trump speaks during a Save America rally on Oct. 1, 2022 in Warren, Michigan. The photo on the right shows the letter authorities say contained ricin. (Photo by Emily Elconin/Getty Images; image of envelope via DOJ)

A woman pleaded guilty on Wednesday to mailing then-President Donald Trump a letter a little more than two years ago with what she described as a “special gift”: homemade ricin.

Pascale Cecile Veronique Ferrier, a 55-year-old dual citizen of Canada and France, sent the threatening letters in September 2020, which contained ricin that she made from her home in Quebec, Canada, prosecutors say.

“I hope you like it,” the text of the letter, attached as a court exhibit, said.

“You ruin USA and lead them to disaster,” the Canadian resident wrote, hand-scrawled in block capital letters. “I have US cousins, then I don’t want the next 4 with you as president.”

When government personnel screen the letter at the White House Mail Sorting Facility on Sept. 18, 2020, prosecutors say they found a “white, powdery substance that later tested positive for ricin, a highly toxic material.”

“The text of the letter referred to the President as an ‘Ugly Tyrant Clown,’ and instructed him to ‘[g]ive up and remove your application for this election,'” a court filing seeking the defendant’s detention said. “The letter referred to the toxic ricin as a ‘Special Gift . . . for you [the President] to make a decision.’ The letter included threats of additional violence to come: ‘If it doesn’t work, I’ll find a better recipe for another poison, or I might use my gun when I’ll be able to come.'”

Prosecutors say that the letter was signed “Free Rebel Spirit.” 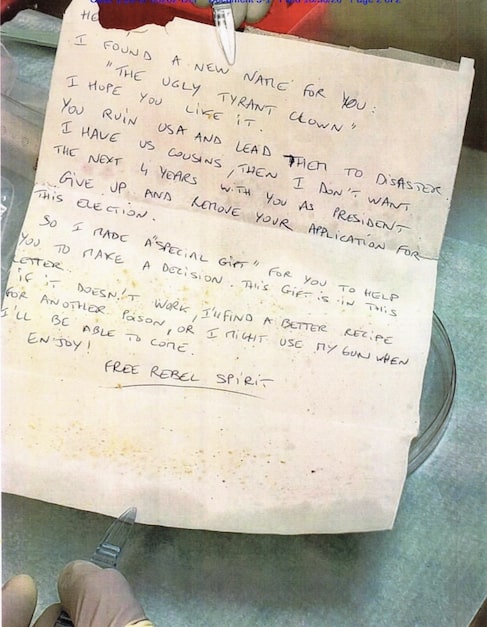 Prosecutors say this was the letter that Ferrier sent to Trump, in a ricin-stuffed envelope. (Photo via DOJ)

Some two days later on Sept. 20, 2020, the woman drove from Canada to the Peace Bridge border crossing in Buffalo, New York, and she told a border agent at the crossing that she was wanted by the FBI for the ricin letters, prosecutors say. They say that she had a loaded firearm, hundreds of rounds of ammunition, a stun gun, pepper spray, two knives and a truncheon.

“The defendant was placed under arrest that same day,” Assistant U.S. Attorney Michael Friedman wrote in a court filing.

In early September, the woman took to Twitter to post: “please shoot [T]rump in the face,” the Justice Department says.

“There is no place for political violence in our country, and no excuse for threatening public officials or endangering our public servants,” Graves said in a statement. “We hope this resolution will serve as a warning that using our mail system to send a toxic substance and other threats of this type will cost you your freedom for many years.”

In 2019, Ferrier visited Texas and was detained there for roughly 10 weeks — she believed the law enforcement officials were responsible for that detention, the Department of Justice says.

“This woman did not succeed in her efforts to poison numerous public officials in our district, but her actions still created fear and stress for many of these dedicated public servants,” Hamdani said.

Ferrier’s sentencing has been scheduled for April 26, 2023.

Update—Jan. 25, 2023 at 3:50 p.m. ET: This story has been updated with information from court filings, and the image has been replaced.