Can the Military Legally Deploy to Control Protests? | Law & Crime

Trump Wants The Military Ready to Deploy to Minneapolis. Here’s What The Law Says About Posse Comitatus. 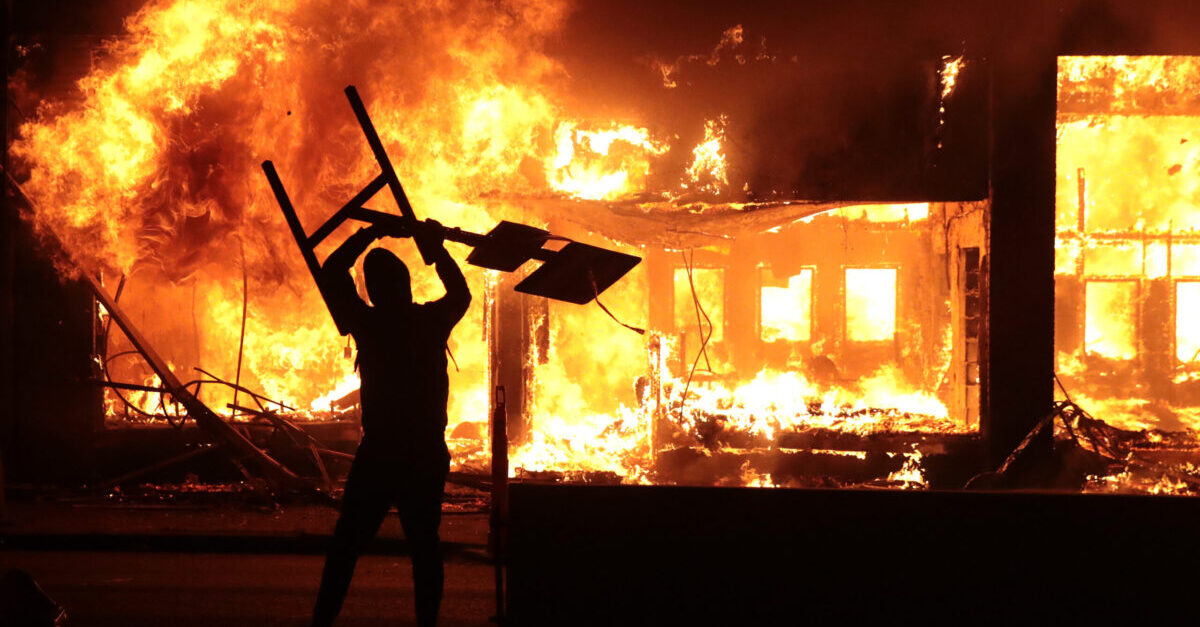 President Donald Trump has requested that the U.S. Army issue “‘prepare to deploy’ orders for military police units from several army bases around the country,” the New York Times reported Saturday morning. Trump “has been seeking options from his senior national security leaders, including Defense Secretary Mark Esper, for how to deal with the chaotic protests that have ignited in dozens of cities” in response to the death of George Floyd, that report stated originally.  It has since been slightly changed to say that the “U.S. Northern Command has put several military police units on four-hour status, which means they could be ready to deploy in four hours, as opposed to a day.”

Trump himself on Saturday tweeted, in his characteristically blunt and partisan manner, that local officials are not doing enough to control violent protests.

Mayor Jacob Frey of Minneapolis will never be mistaken for the late, great General Douglas McArthur or great fighter General George Patton. How come all of these places that defend so poorly are run by Liberal Democrats? Get tough and fight (and arrest the bad ones). STRENGTH!

Trump later said “the Federal Government will step in and do what has to be done, and that includes using the unlimited power of our Military and many arrests.”

Crossing State lines to incite violence is a FEDERAL CRIME! Liberal Governors and Mayors must get MUCH tougher or the Federal Government will step in and do what has to be done, and that includes using the unlimited power of our Military and many arrests. Thank you!

Trump also said at the White House on Saturday that the military was ready if local authorities called for aid.

NEW:  Trump Threatened, But Did Not Officially Invoke, the Insurrection Act to Quell Uprisings

The suggestions of military mobilization came after a debate Friday over the extent to which the federal government could legally get involved with the repeated and destructive protests in Minneapolis. Former White House ethics lawyer Richard Painter suggested Friday that Trump should stand down on this one and let state officials take care of things.

Hey Big Boy.
Read the Posse Comitatus Act and stay out of Minnesota.

The text of the Posse Comitatus Act reads as follows:

Whoever, except in cases and under circumstances expressly authorized by the Constitution or Act of Congress, willfully uses any part of the Army or the Air Force as a posse comitatus or otherwise to execute the laws shall be fined under this title or imprisoned not more than two years, or both.

As a Rand Corporation publication notes, the “original intent” of the Posse Comitatus Act “was to end the use of federal troops to police state elections in former Confederate states.”

University of Texas law professor Steve Vladeck said that the Posse Comitatus Act “does *not* prevent domestic use of the military for law enforcement.” Instead, “[i]t prevents such use of the military . . . without statutory authorization,” Vladeck noted. “And several statutes already authorize use of federalized guard or federal regulars for riot control.”

The Posse Comitatus Act of 1878 does *not* prevent domestic use of the military for law enforcement. It prevents such use of the military only *without statutory authorization.* And several statutes already authorize use of federalized guard or federal regulars for riot control. pic.twitter.com/3vVf1Ck8mZ

Indeed, under the Insurrection Act, federal law allows the president to use the “militia or the armed forces, or both” to “suppress, in a State, any insurrection, domestic violence, unlawful combination, or conspiracy” which “hinders the execution of the laws of that State, and of the United States.” The president can take action to protect “people . . . deprived of a right, privilege, immunity, or protection named in the Constitution and secured by law” when the “authorities of that State are unable, fail, or refuse to protect” people harmed. The president can also send in the military when an insurrection “opposes or obstructs the execution of the laws of the United States or impedes the course of justice under those laws.”

Another section of the Insurrection Act is also on point.  It says:

Whenever the President considers that unlawful obstructions, combinations, or assemblages, or rebellion against the authority of the United States, make it impracticable to enforce the laws of the United States in any State by the ordinary course of judicial proceedings, he may call into Federal service such of the militia of any State, and use such of the armed forces, as he considers necessary to enforce those laws or to suppress the rebellion.

Before taking military action, the Insurrection Act says the president “shall, by proclamation, immediately order the insurgents to disperse and retire peaceably to their abodes within a limited time.”

In other words, the Posse Comitatus Act forbids what is not authorized elsewhere in the law, and a number of laws, such as the Insurrection Act, elsewhere authorize a lot of things.

The U.S. Supreme Court has analyzed the use of the military in civilian affairs several times, usually in nonbinding dicta.

Just after the Civil War, yet before the Posse Comitatus Act was passed, a group of concurring U.S. Supreme Court justices in 1866 opined that there were “three kinds of military jurisdiction.” One, “military government,” could “be exercised in time of foreign war without the boundaries of the United States, or in time of rebellion and civil war within states or districts occupied by rebels treated as belligerents.” Another, “martial law,” could “be exercised in time of invasion or insurrection within the limits of the United States, or during rebellion within the limits of states maintaining adhesion to the National Government, when the public danger requires its exercise.” The concurring justices said “martial law” could be invoked by the president “in times of insurrection . . . within districts or localities where ordinary law no longer adequately secures public safety and private rights.”

The Supreme Court later addressed the use of federal troops and domestic military monitoring in a 1972 case, noting:

The President is authorized by [federal law] to make use of the armed forces to quell insurrection and other domestic violence if and when the conditions described in that section obtain within one of the States. Pursuant to those provisions, President Johnson ordered federal troops to assist local authorities at the time of the civil disorders in Detroit, Michigan, in the summer of 1967 and during the disturbances that followed the assassination of Dr. Martin Luther King.

That case held that Americans could not sue to prevent the military monitoring of their domestic activities. The dissent quoted previous authority to state that “[t]he military establishment is, of course, a necessary organ of government; but the reach of its power must be carefully limited lest the delicate balance between freedom and order be upset.”

An 8th Circuit Court of Appeals case from 1976 has been interpreted as having okayed the use of military planes, military personnel, and military equipment to surveil domestic disturbances. It has also been interpreted as allowing the military to advise local authorities on how to handle insurrections. (To the surprise of zero people who are legally astute, a Customs and Border Protection unmanned drone flew over Minneapolis on Friday.)

The legal premise of a restricted military under the Posse Comitatus Act and the legal reality of broad authorizing statutes is obviously confusing.

A Fourth Circuit Court of Appeals decision from 1974 is illustrative of the conundrum of how military-led civilian arrests can pose complications in later court prosecutions. A defendant who was accused and convicted of violating firearms laws by selling weapons “to minors and non-residents” argued that because U.S. Marines were used “in large part” to carry out the investigation, the government violated the Posse Comitatus Act and several military regulations.

The appeals court held that it did “not think that the letter of the Act was violated” but that the military regulations were violated. The court refused to flip the convictions by applying an exclusionary rule of evidence to block the introduction of evidence secured by the military from coming into the case. “We reserve, however, the possibility that such a rule may be called for should repeated cases involving military enforcement of civilian laws demonstrate the need for the special sanction of a judicial deterrent,” the court said in its ruling. In other words, the court let this one instance of military policing slide.

Still, the court noted “the traditional American insistence on exclusion of the military from civilian law enforcement, which some have suggested is lodged in the Constitution.” The court said it was not “necessary to interpret relatively unexplored sections of the Constitution” (which it cited as Article I, § 8; Article IV, § 4; and the Third Amendment) to rule conclusively on the matter.

And, in another case, the Ninth Circuit Court of Appeals bluntly stated that the Act should not be read to apply to all branches of the military:  “By its express terms, this act prohibits only the use of the Army and the Air Force in civilian law enforcement,” that appeals court wrote in 1986. “We decline to defy its plain language by extending it to prohibit use of the Navy.”

The U.S. Supreme Court in 2012 discussed the historical roots of posse comitatus law in general in a tangential discussion to a parallel, but separate ruling which held that a part-time, temporary, or occasional government attorney enjoyed the same immunities as a full-time government employee when engaging in official acts. Per the Court (citations and most internal quotations omitted):

Both judicial and ministerial officers, in the execution of the duties of their office, are under the strong protection of the law; and their legally summoned assistants, for such time as in service, are officers of the law.  [P]rivate individuals summoned by a constable to execute a search warrant were protected from a suit based on the invalidity of the warrant.

In that same case, the U.S. Supreme Court quoted favorably a North Carolina Supreme Court case dating back to 1894:  it was “‘well settled by the courts’ that a sheriff may break open the doors of a house to execute a search warrant and that ‘if he act in good faith in doing so, both he and his posse comitatus will be protected.'”

Though the posse comitatus analysis in this recent case is an aside which arguably is not binding upon a future examination of the extent of military involvement in civilian policing, it does illustrate the underpinnings of the core legal concept that local law enforcement can enlist the help of reinforcements when events call for drastic measures.

Editor’s note: this piece has been updated.