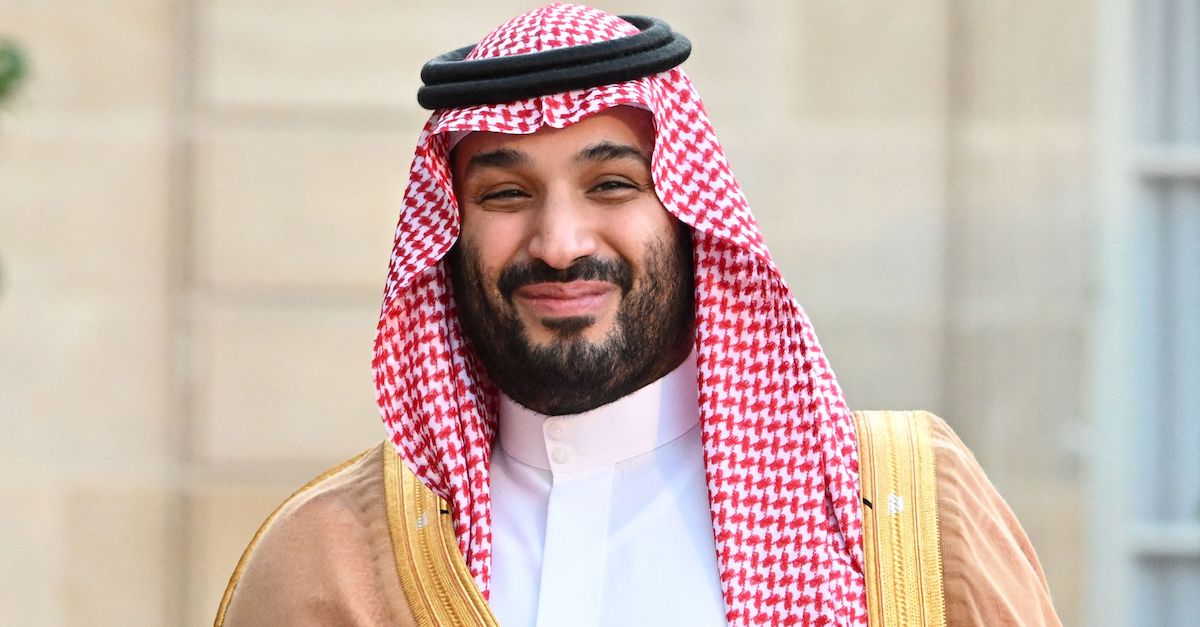 Saudi Crown Prince Mohammed bin Salman smiles as he arrives at the Elysee Palace in Paris on July 28, 2022 for a meeting with the French President.

The Turkish woman who said that she had been on her way to marry Jamal Khashoggi before Saudi officials murdered her fiancée inside an Istanbul consulate urged a judge to reject the U.S. government’s position that Crown Prince Mohammed bin Salman enjoys sovereign immunity from her lawsuit.

“The Executive Branch can decide to recognize MBS as Saudi Arabia’s head of government, but that decision does not compel this Court to accede to MBS’s blatant attempt to manipulate this Court’s jurisdiction and thereby secure impunity for the horrific murder he ordered,” attorneys for Hatice Cengiz wrote in a 10-page response to the Department of Justice on Tuesday.

Known by his initials MBS, Salman claimed that his recent appointment has the Saudi prime minister cloaked him with sovereign immunity from Cengiz’s lawsuit, which seeks to find him liable for Khashoggi’s death. Cengiz argues that Salman’s appointment to the kingdom’s head of government was simply gamesmanship to avoid the long arm of U.S. courts.

“Just six days before the deadline for the United States to submit its views on head-of-state immunity, MBS’s father, King Salman bin Abdulaziz Al Saud, unilaterally altered Saudi Arabia’s governing charter and appointed MBS ‘Prime Minister.'” the legal brief says. “The King’s Order changed MBS’s title, but it preserved the King’s role as ‘ultimate arbiter’ over all Saudi government authorities. It is apparent—and neither MBS nor the State Department have seriously disputed—that MBS’s appointment was made with the deliberate attempt to manipulate this Court’s jurisdiction. No comparable appointment has occurred in the history of international law.”

“Either position is both remarkable and sui generis. If the latter, furthermore, how many heads of government can there be in the United States’ view? Can King Salman also simply declare Defendant Saud al-Qahtani another ‘Prime Minister’ and therefore a third head of government?” the footnote asks, referring to the former Saudi royal court advisor who reportedly oversaw Khashoggi’s killing via Skype.

That is why U.S. District Judge John D. Bates, who is presiding over the lawsuit, gave the Department of Justice an opportunity to chime in one whether bin Salman could claim sovereign immunity. Days after President Joe Biden met with bin Salman in Saudi Arabia, the Justice Department sought more time to consider the question, and Judge Bates granted multiple extensions. Bin Salman’s appointment as prime minister fell days before the second deadline.

On Nov. 17, 2022, roughly a month after the fourth anniversary of Khashoggi’s death, the U.S. government answered the immunity question in the affirmative — stating that bin Salman’s appointment to prime minister tied their hands.

“The United States Government has expressed grave concerns regarding Jamal Khashoggi’s horrific killing and has raised these concerns publicly and with the most senior levels of the Saudi government,” a filing by the DOJ’s Civil Division stated. “It has also imposed financial sanctions and visa restrictions as a result of, and related to, Mr. Khashoggi’s killing, and has sought to promote transparency through the release of the intelligence community assessment of the Saudi government’s role in the incident. However, the doctrine of head of state immunity is well-established in customary international law and has been consistently recognized in longstanding Executive Branch practice as a status-based determination that does not reflect a judgment on the underlying conduct at issue in the litigation.”

“The government contends that the Court must blindly rubber-stamp its suggestion of immunity, without any analysis as to whether dismissal would comport with principles of customary international law,” Harper wrote. “The government is wrong.”