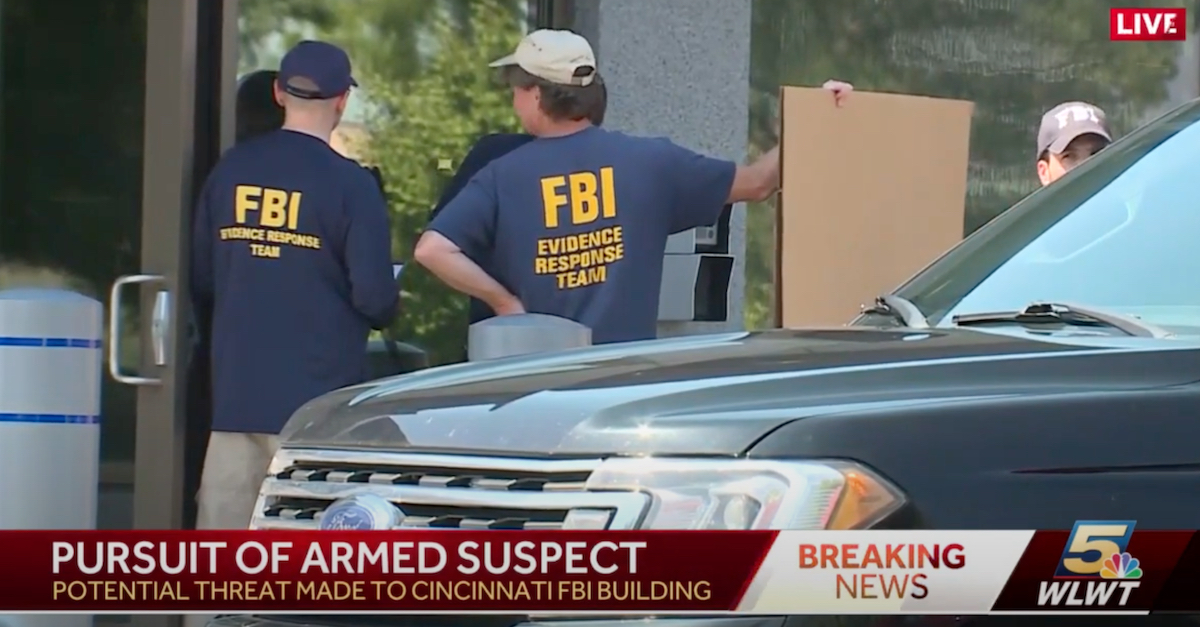 A WLWT-TV screengrab shows FBI agents after an attack on the organization’s Cincinnati offices.

An assailant entered an FBI office in Cincinnati on Thursday morning, fired a nail gun at law enforcement personnel, brandished a rifle, and fled on area highways, according to several news reports, official statements from the FBI, and state law enforcement authorities. The suspect was actively engaged in a shootout and subsequent standoff with law enforcement as of early Thursday afternoon, and he later died, according to reports.

NBC News and The New York Times identified the assailant as Ricky Walter Shiffer, 42, citing law enforcement sources. The Times said Shiffer spoke favorably on social media of the Jan. 6 attack on the U.S. Capitol Complex and claimed he was present somewhere in the area that day. He was not, however, ever arrested for a crime in connection with the events of Jan. 6.

A Twitter account that bore Shiffer’s name was taken down around 7:10 p.m. on Thursday as Law&Crime was reviewing its contents.

.@KenDilanianNBC: “Two law enforcement sources briefed on the matter tell NBC News a man entered an FBI field office today in Cincinnati, Ohio and fired a nail gun at law enforcement personnel. The male then held up an AR-15 style rifle before fleeing in a vehicle.”

Cincinnati CBS affiliate WKRC reported that Interstate 71 was shut down in both directions through significant portions of the afternoon and that shots had been fired in Clinton County, Ohio.

“Clinton County Emergency Management Agency said there is an armed suspect in the area of SR 73, Smith Road and SR 380,” the television station said. “The agency said the man, who is wearing a gray shirt and body armor, exchanged gunfire with law enforcement.”

A lockdown was in effect — but has since been lifted — for a one-mile radius centered on the intersection of Smith Road and Center Road, a country crossroads in Chester Township, Ohio, surrounded on all four sides by flat corn fields and marked by two stop signs. 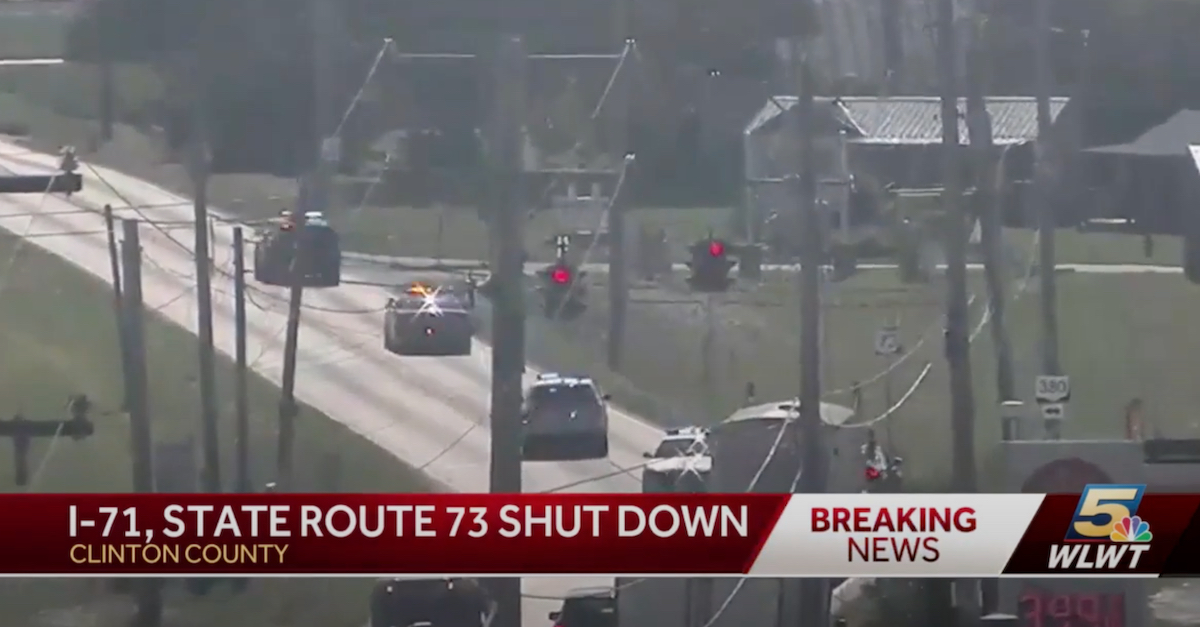 A WLWT-TV screengrab shows part of what the television station described as the police chase which involved a suspect who allegedly fired a nail gun and brandished a rifle at an FBI building in Cincinnati. The suspect’s vehicle does not appear to be visible in the video captured.

The events unfolded starting around 9:00 a.m. on Thursday. The FBI’s Cincinnati Field Office tweeted that “an armed subject attempted to breach the Visitor Screening Facility at #FBI Cincinnati.”

“After an alarm and a response by FBI special agents, the subject fled north onto Interstate 71,” the initial tweet said.

At approximately 9 AM this morning an armed subject attempted to breach the Visitor Screening Facility at #FBI Cincinnati. After an alarm and a response by FBI special agents, the subject fled north onto Interstate 71. pic.twitter.com/vFZHnpbM9L

Later, the FBI suggested that the suspect fled to a location near Wilmington, Ohio, where state and federal agents were “trying to resolve” the “critical incident.”

From a law enforcement source:

Incident at Cincinnati FBI. Assailant fled and now 60 miles NW at i-71 and State Highway 73. Multiple shots fired in standoff. LE teams getting into positions for an interaction. Roads being closed. No word on injuries/rationale. JTTF on scene.

Ohio state troopers and the FBI are pursuing a man who tried to break into an FBI office in the state. @OSHP the suspect, who was driving a white Ford Crown Victoria, to Clinton County where shots have been fired, according to officials, and where there is an ongoing standoff

Cincinnati NBC affiliate WLWT reported that the man brandished an “AR-15 style rifle” before fleeing the area of the FBI building.

Clinton County officials told WLWT around midday that the suspect “has not yet been taking into custody, but is contained.”

At an early afternoon press conference, Ohio Highway Patrol Lt. Nathan Dennis confirmed that the suspect unsuccessfully tried to enter the FBI office at around 9:15 Thursday morning and fled in a white Crown Victoria.  An officer attempted to stop the suspect near a northbound rest area on I-71 in Warren County at 9:37 a.m.  A pursuit ensued in the northbound direction.

“The suspect vehicle did fire shots during that pursuit,” Dennis said.

The suspect exited the highway, traveled east on Route 73, north on Smith Road, and came to a stop where gunfire was exchanged again, Dennis said.

“No officers have been injured as a result of this,” Dennis added.

The standoff remained ongoing as of about 1:30 p.m., he said.

Violence and threats against law enforcement, including the FBI, are dangerous and should be deeply concerning to all Americans. Every day I see the men and women of the FBI doing their jobs professionally and with rigor, objectivity, and a fierce commitment to our mission of protecting the American people and upholding the Constitution. I am proud to serve alongside them.

This is a developing story . . . it has been updated with more information several times since its initial publication.