Michael Flynn’s Family Claims Video of Them Reciting ‘Where We Go One, We Go All’ Was Not About QAnon 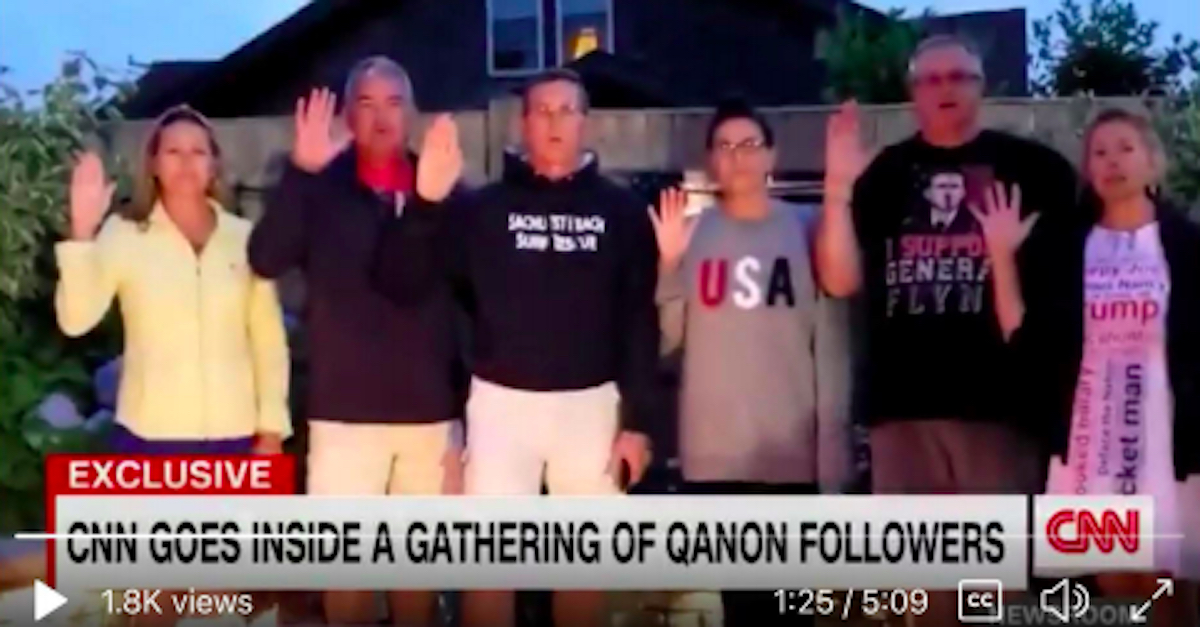 The family of Michael Flynn claims in a legal filing that a video the former national security advisor posted to Twitter last year showing them reciting “where we go one, we go all” — widely known as a QAnon slogan — was nothing more than a “statement of support for each other.”

In a 32-page motion filed Wednesday, Flynn’s brother John “Jack” Flynn and his wife Leslie Flynn argue that CNN exposed them to “public scorn, ridicule and contempt” when the network aired the clip and accused the Flynn family of being “QAnon followers.” The motion is part of the couple’s $75 million defamation lawsuit against CNN, which the network sought to dismiss last month. The family is suing CNN despite Michael Flynn himself being the one who first spread the video.

The video message shows the Flynn family reciting the Senate oath of office followed by the slogan “where we go one, we go all.” Often abbreviated as “WWG1WGA,” the phrase — which is a line from the 1996 Ridley Scott movie “White Squall” that QAnon faithful often misattribute to former President John F. Kennedy — has developed into a rallying cry for followers of the discredited theory.

Flynn’s video was also posted less than two weeks after the account believed to be run by the leader of the QAnon movement — who goes by “Q” — on June 24 , 2020 released a post titled “Digital Warriors: Take the Oath and Serve Your Country.” The “oath” the post encouraged followers to recite was the Senate oath of office followed by “WWG1WGA.”

I'm not a lawyer, but it’s bizarre to see anyone argue that the "Digital Soldier Oath" doesn't signify support for QAnon or isn't an oath.

The Flynn family's words from that July 4th 2020 video were taken from a Q drop posted a few weeks earlier which commanded "take the oath." https://t.co/8XlIsA8z86 pic.twitter.com/xDJc7vuzUK

General Flynn, who has been credited with coining the term “digital soldiers” in reference to U.S. cyberwar capabilities, posted the video to Twitter along with the hashtag “#TakeTheOath,” which became popular among within the QAnon community after the June 24 “Q” post.

But according to the Flynns’ attorney Steve Biss, recently known for representing Rep. Devin Nunes (R-Calif.) in a series of failed defamation lawsuits, the Flynn family’s oath mirroring the QAnon oath was merely coincidental.

“After finishing the oath to the United States Constitution, General Flynn stated, ‘where we go one, we go all.’ Each family member repeated the phrase, as they had repeated each line of the oath to the Constitution,” the family’s motion stated. “The Flynn’s repetition of the phrase ‘where we go one, we go all’ at the July 4, 2020 barbecue did not signify any kind of support for QAnon. It was not an oath of allegiance to QAnon, or any kind of oath at all. It was a simple, family, July 4 statement of support for each other.”

The motion describes QAnon as a “domestic violence extremist group” and a “domestic terrorism threat.” It repeatedly compares the group to the Nazis.

“Accusing the Flynns of being ‘QANON FOLLOWERS’, even for a few seconds, is no different than accusing them of being Nazi sympathizers. It is common knowledge that Nazis, white supremacists, and adherents of QAnon are violent extremists,” Biss wrote. “That is the connection that CNN intended and did make in the minds of viewers. To imply that a person is a Nazi sympathizer or a ‘QANON FOLLOWER’ is the same thing. It is an egregious thing to say about a businessman, like Jack Flynn, especially in light of the January 6, 2021 storming of the United States Capitol.”

“We’ve been clear that we will take strong enforcement action on behavior that has the potential to lead to offline harm, and given the renewed potential for violence surrounding this type of behavior in the coming days, we will permanently suspend accounts that are solely dedicated to sharing QAnon content,” the company said in a statement.