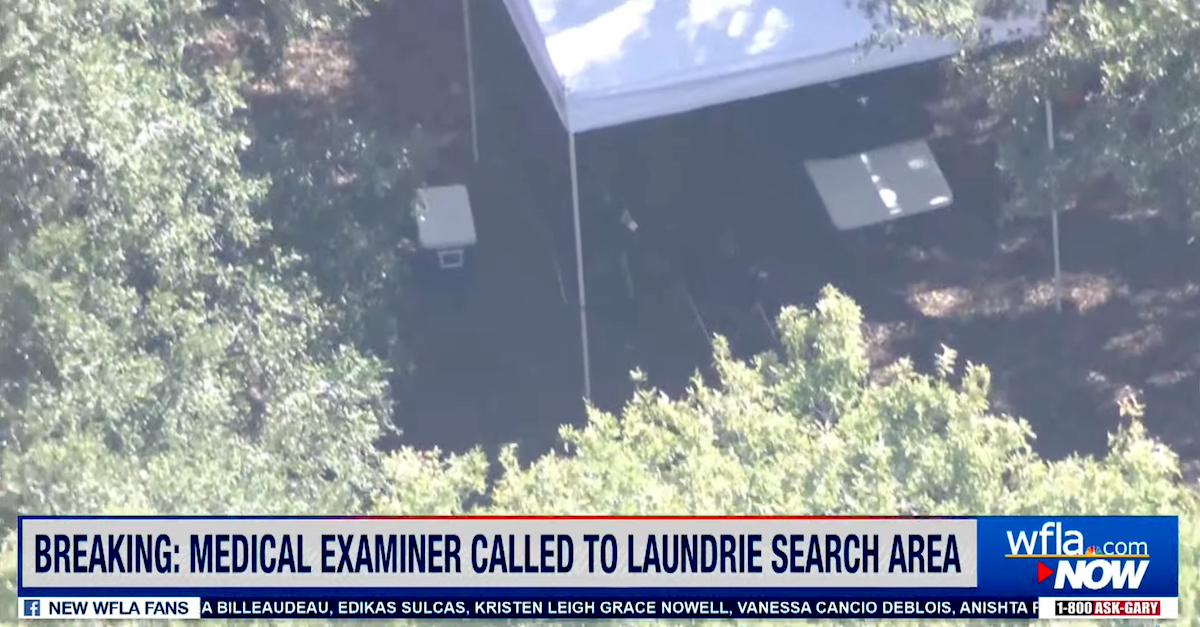 UPDATE, 4:38 p.m.: During a Wednesday afternoon briefing, the FBI confirmed the discovery of apparent human remains, a notebook, and a backpack in the Florida Nature Park where Brian Laundrie vanished one month ago. Read more here.

Our original story appears below.

“[P]artial human remains” have apparently been found in an area “previously underwater” at a nature reserve in Florida where law enforcement officers have for weeks been looking for missing man Brian Laundrie. That’s according to a report from NBC News.  The suspected remains were reportedly found “near a backpack consistent” with what Laundrie was believed to have been carrying, WFLA-TV reporter Walt Buteau tweeted.

A senior law enforcement officials tells @NBCNews @PeteWilliamsNBC what appears to be partial human remains have been found in the Carlton Reserve in an area previously underwater.
The remains were found near a backpack consistent with items Brian Laundrie may have had

Representatives with the medical examiner’s office in Sarasota County, Fla., told Law&Crime earlier Wednesday afternoon that they were called to an area near the Carlton Reserve — but they did not directly confirm the call was related to Laundrie.

Television images captured by NBC affiliate WFLA-TV’s helicopter showed a white tent, several coolers, chairs, and at least a half-dozen law enforcement officers on the scene, the Tampa NBC affiliate said early in the afternoon. A mobile command center from the Lee County, Fla. Sheriff’s Office also arrived on the scene.  The Pasco County, Fla. Sheriff’s Office was also called in to help.

Tent now set up in the reserve.@8_plamison is up. pic.twitter.com/pB5anHGzj2

By the middle of Wednesday afternoon, at lest one additional tent was set up in a grassy area, and perimeter was established in the vicinity of the tent using familiar yellow police tape. 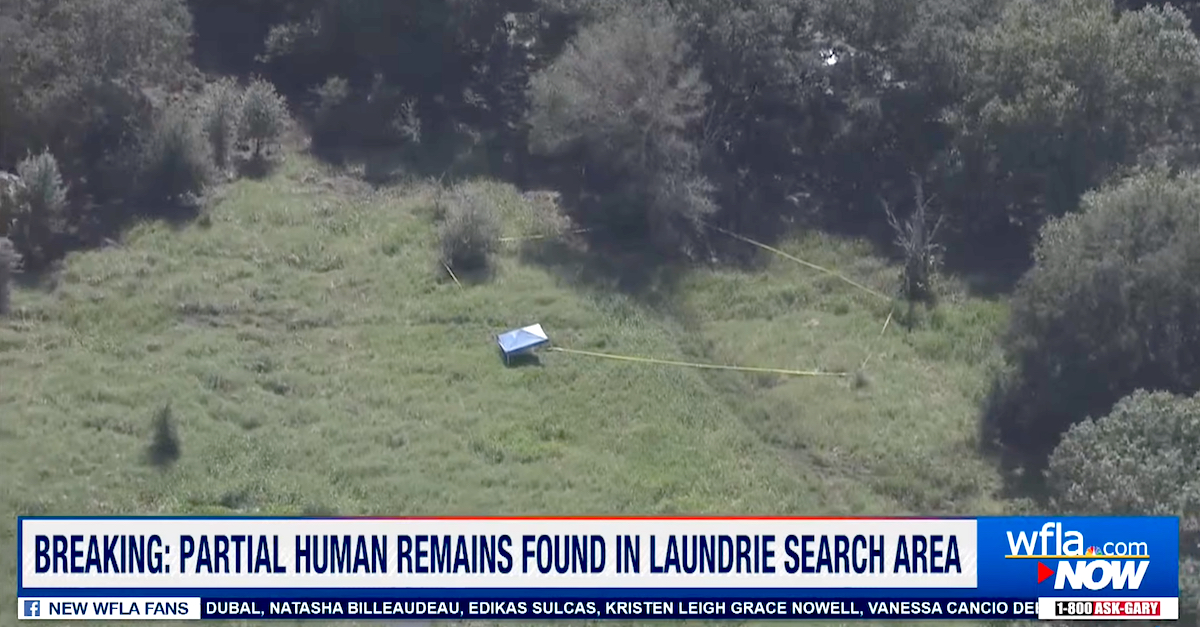 Earlier in the day, an attorney representing Laundrie’s parents confirmed that articles belonging to Brian were discovered during a search this morning.

“Chris and Roberta Laundrie went to the Myakkahatchee Creek Environmental Park this morning to search for Brian,” attorney Steven Bertolino told various reporters following the case, including Law&Crime’s Angenette Levy. “The FBI and NPPD were informed last night of Brian’s parents’ intentions and they met Chris and Roberta there this morning. After a brief search off a trail that Brian frequented some articles belonging to Brian were found. As of now law enforcement is conducting a more thorough investigation of that area.”

UPDATE: Statement from Laundrie family attorney, Steve Bertolino. He said Brihan’s parents went to the area to search for him and told LE about their intentions @LawCrimeNetwork pic.twitter.com/xSUSMm5onN

Bertolino responded “no comment” when asked if a body had been found.

The FBI eventually confirmed the presence of “items of interest” at the Carlton Reserve “in connection with the search for Brian Laundrie” but did not provide further details.

UPDATE: Items of interest were located at the Carlton Reserve this morning in connection with the search for Brian Laundrie. An #FBI Evidence Response team is processing the scene. The reserve is closed to the public and no further details are available at this time. @FBIDenver pic.twitter.com/itOYRpY6fp

It was unclear from the available information how long the items connected to Laundrie may have been in the area. 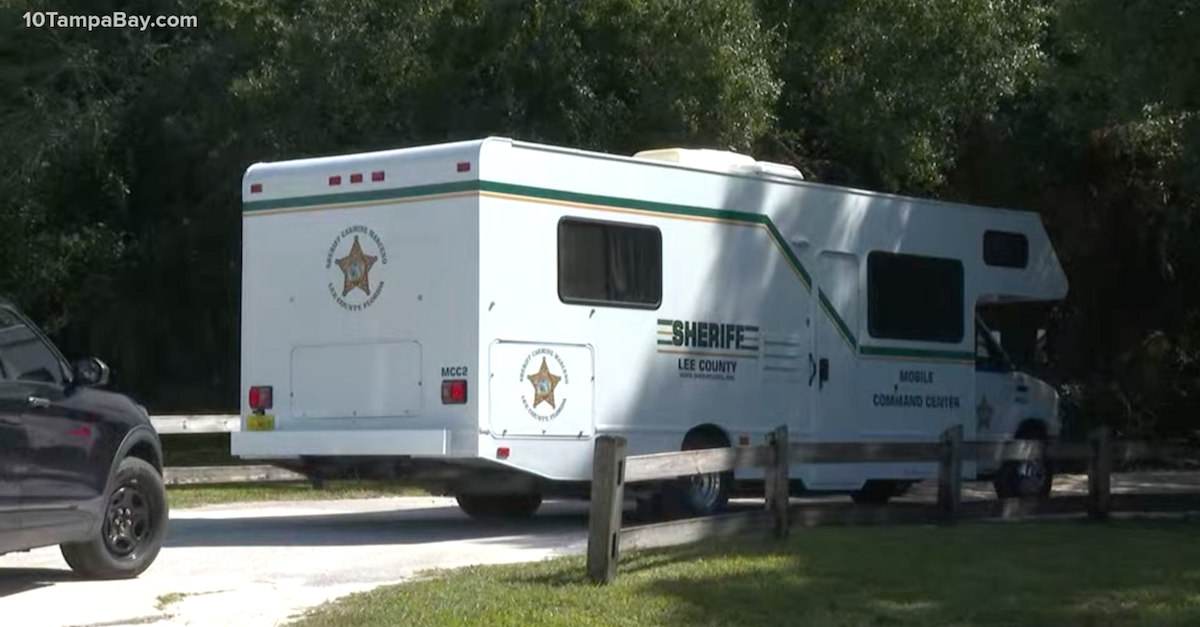 A mobile command center arrives at the Myakkahatchee Environmental Park in Florida on Oct. 20, 2021. (Image via screengrab from WTSP-TV/YouTube.)

I followed up with Steve Bertolino and asked him whether he was aware the medical examiner had been called to the scene. He responded “no comment.” The ME is not called unless there’s a body @LawCrimeNetwork

Salt Lake City, Utah NBC affiliate KSL-TV reported that a cadaver dog was also called to the scene along with the medical examiner’s office.  Images broadcast by FOX News showed police officers leading search dogs through the area.  Forensic death examiner Joseph Scott Morgan, a professor at Jacksonville State University in Alabama and a frequent guest on the Law&Crime Network, told FOX News that the dogs may be looking for remains scattered by animals.  Morgan predicted that a forensic anthropologist would likely be called to the scene to conduct a further assessment.

“The coroner doesn’t magically show up,” Morgan added when asked about the significance of the investigation. 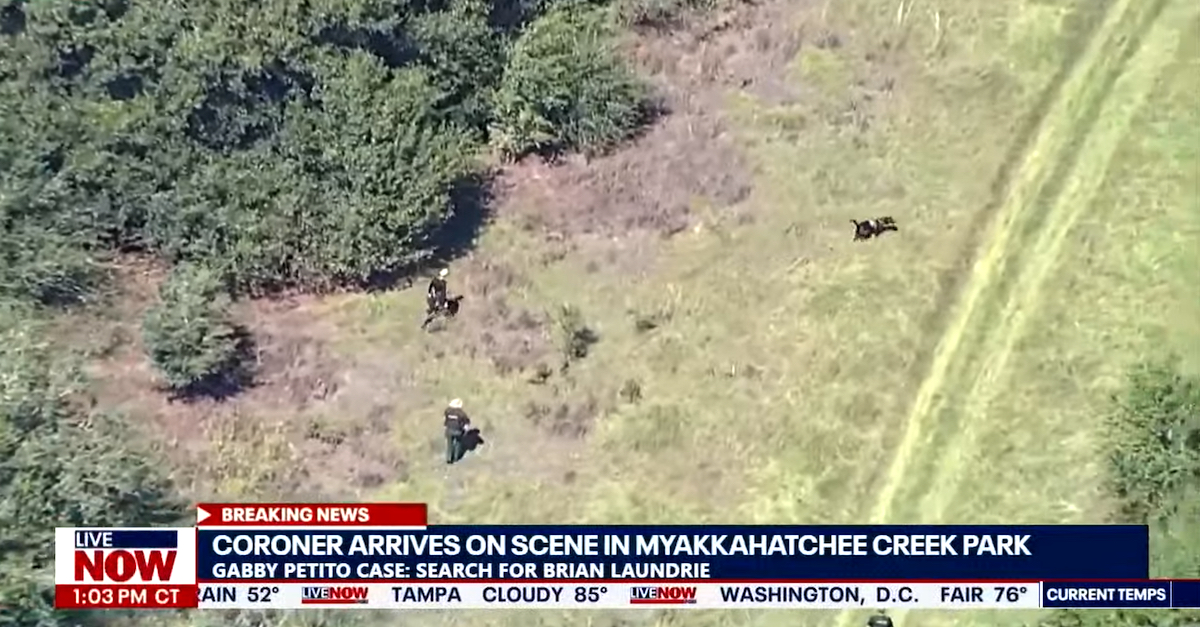 During the law enforcement activity, FOX News shared video it described as “exclusive” which purported to show a law enforcement officer speaking with Chris and Roberta Laundrie about an apparent evidentiary discovery.

Laundrie has long been sought as a person of interest over the disappearance (and eventually the confirmed death) of his fiancée Gabby Petito.  The duo was in the midst of a cross-country van trip when Laundrie returned alone to Florida in the white van in which he was traveling with Petito.  Laundrie was subsequently indicted for using a debit card without permission; Petito’s death was ruled a homicide caused by strangulation.  The search for Laundrie led to massive police pursuit in the sprawling T. Mabry Carlton Jr. Memorial Reserve, a more than 24,000-acre wild area in Sarasota County which Laundrie was known to have frequented. 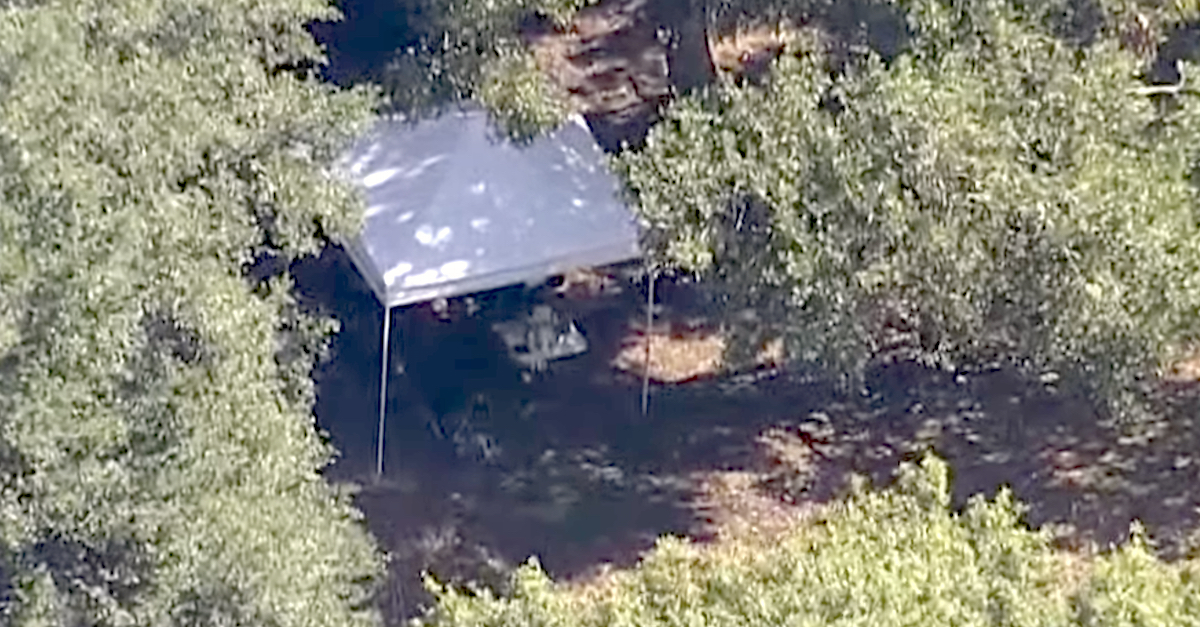 A white tent was set up in an area of interest in the search for Brian Laundrie on Oct. 20, 2021. (Image via screengrab from WTVT-TV.)

Agreeing with a commentator on social media, WFLA anchor J.B. Biunno noted during a live stream of the rapidly unfolding events that it had not rained in the search area in several weeks.  Some of the water in the swampy area had receded.

Biunno later noted that the discovery of other bodies during the early stages of the Laundrie search resulted in immediate clarifications from law enforcement agencies nationwide that the discoveries were neither Laundrie nor Petito.  Law enforcement remained silent for several hours on Wednesday as to who — or what — they may have found.

WFLA investigative reporter Mahsa Saeidi said the Myakkahatchee Environmental Park had just reopened to the public on Tuesday — one day before the search commenced.

This is a developing story . . . Law&Crime is updating it as new information becomes available . . .

[Featured image via screengrab from WFLA-TV/YouTube]