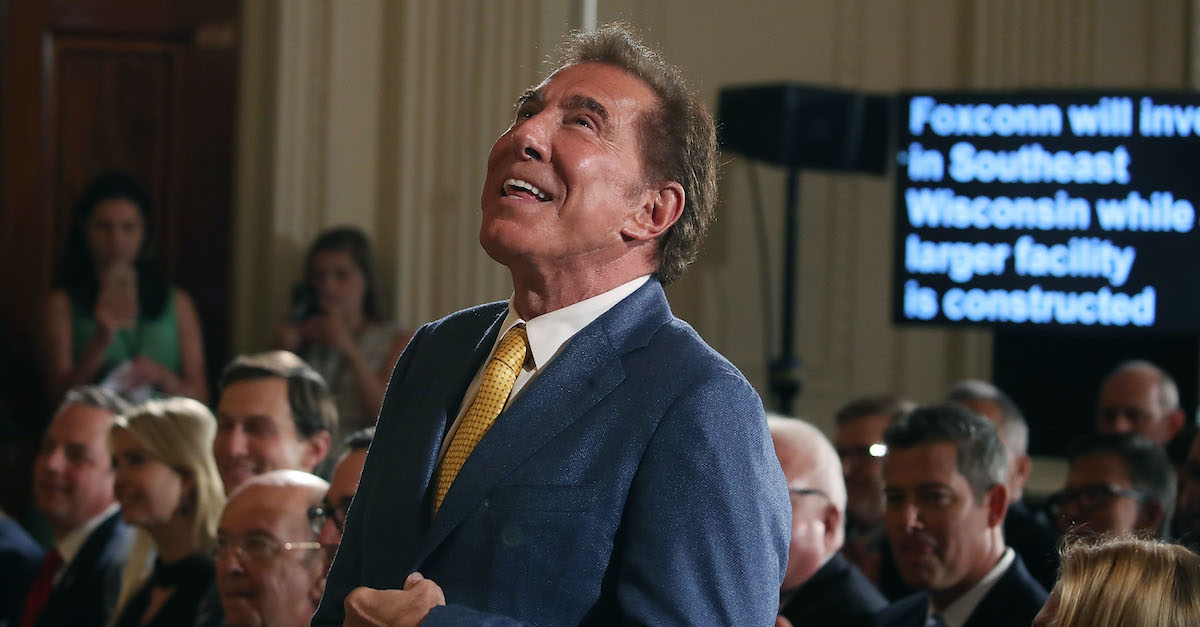 The U.S. Department of Justice sued billionaire casino magnate Steve Wynn in a lawsuit seeking to compel him to register as a foreign agent of the Chinese government.

In 2017, Wynn—who oversaw the construction and development of a luxury resort in Chinese-controlled Macau—allegedly did the bidding of China and the country’s vice minister of public security Sun Lijun by exploiting his connections to then-President Donald Trump.

“Specifically, at the request of Sun, and on behalf of the PRC, the Defendant conveyed to former President Donald J. Trump and his Administration (‘the Trump Administration’) the PRC’s request to remove from the country a PRC national who had sought political asylum in the United States,” the Justice Department’s 13-page complaint states. “In so doing, from at least June 2017 through at least August 2017, the Defendant acted as an agent for foreign principals Sun and the PRC and engaged in political activities on their behalf in the United States.”

According to the complaint, the plan to lobby Trump at China’s behest on the matter started with a meeting coordinated by Malaysian fugitive Low Taek Jho in May 2017. Better known as Jho Low, the businessman is alleged architect of a multibillion-dollar plot to loot 1MDB, Malaysia’s development fund.

At the meeting Low allegedly gathered, Sun asked Trump’s former campaign chair Elliott Broidy, hip-hop artist Prakazrel Michel, and businessperson Nickie Lum Davis to lobby Trump and his administration to cancel the unnamed Chinese national’s visa, according to the complaint. Prosecutors say that the national left China in 2014, was charged with corruption, and then sought political asylum in the United States.

“In approximately June 2017, Broidy, on behalf of Sun, elicited the Defendant [Wynn]’s help in the lobbying effort,” the complaint states. “Defendant served as the RNC finance chair from January 2017 through January 2018 and met Broidy through that work. Broidy believed that the Defendant’s RNC experience, combined with the Defendant’s business dealings in the PRC and friendship with then-President Trump, would be helpful in getting access to Trump Administration officials.”

Broidy pleaded guilty a little less than two years ago to illegally lobbying the Trump administration for millions on Low’s behalf.

The national is not named in the suit, but his description reportedly matches that of Guo Wengui, a billionaire real estate tycoon tied to Trump’s former chief strategist Steve Bannon. The New York Times noted that Guo was accused of corruption in 2014, charges he claimed were retaliatory.

According to the complaint, Broidy and Wynn repeatedly communicated through Wynn’s wife. One of the messages that Broidy allegedly sent on June 27, 2017, conveyed the personal interest in the matter by Chinese leader Xi Jinping:

“President Xi Jinping mentioned to President Trump at Mar-A-Lago that he would like [the PRC national] returned. Vice Minister [Sun] met with me and requested help with regard to [the PRC national]. The Vice Minister told me this is a matter of upmost importance to President Jinping. He promised to return certain US citizens held hostage by China and would accept a very large number of Chinese illegal immigrants for deportation back to China. Finally, he offered new assistance with regard to North Korea.”

The Justice Department claims that Wynn brought up the matter to Trump at a dinner that night, when the casino magnate allegedly passed on Guo’s passport photos to the then-president’s secretary.

Later that summer between July and August, Wynn allegedly attempted to organize meetings with senior officials on the National Security Council and the White House.

When the efforts to remove Guo did not succeed, Wynn sought to “exit the situation gracefully, preserve his business interests in China, and avoid offending anyone,” according to the Justice Department.

The lawsuit asks a federal judge to order Wynn file a statement under the Foreign Agents Registration Act (FARA).

“Where a foreign government uses an American as its agent to influence policy decisions in the United States, FARA gives the American people a right to know,” Olsen said in a statement.

Wynn’s attorneys Reid Weingarten and Brian Heberlig, from Steptoe & Johnson, issued a statement after the lawsuit was filed.

“Steve Wynn has never acted as an agent of the Chinese government and had no obligation to register under the Foreign Agents Registration Act,” they wrote. “We respectfully disagree with the Department of Justice’s legal interpretation of FARA and look forward to proving our case in court.”