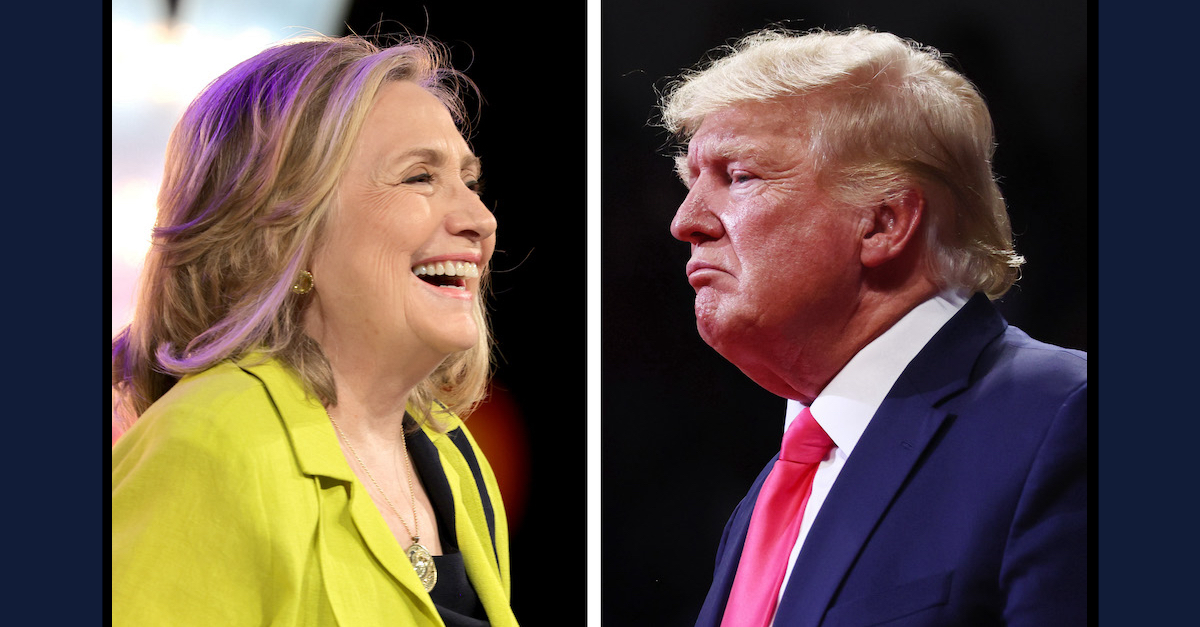 A federal judge in Florida sanctioned lawyers for former President Donald Trump who represented him in his failed lawsuit against Hillary Clinton over the 2016 presidential election.

Further sanctions could be on the way. Thursday’s order against four attorneys and two law firms does not resolve a separate motion filed by Clinton, who was one of 31 defendants in a sprawling lawsuit characterizing the Russia investigation as a massive racketeering plot.

U.S. District Judge Donald M. Middlebrooks slapped the attorneys with hefty fines — and suggested that “Bar and disciplinary authorities” may want to step in for further action.

“The rule of law is undermined by the toxic combination of political fundraising with legal fees paid by political action committees, reckless and factually untrue statements by lawyers at rallies and in the media, and efforts to advance a political narrative through lawsuits without factual basis or any cognizable legal theory,” Middlebrooks wrote in a blistering ruling. “Lawyers are enabling this behavior and I am pessimistic that Rule 11 alone can effectively stem this abuse. Aspects may be beyond the purview of the judiciary, requiring attention of the Bar and disciplinary authorities. Additional sanctions may be appropriate.”

Earlier this year, Trump sued Clinton — and dozens of other people and organizations who often serve as fodder for right-wing outrage, including the Democratic National Committee, the Democratic Party law firm Perkins Coie, former FBI Director James Comey, former FBI agent Peter Strzok, former FBI attorney Lisa Page, and former British intelligence officer Christopher Steele — in March, accusing the defendants of engaging in a racketeering “plot” against him in the 2016 presidential election, which he won.

Judge Middlebrooks, a Bill Clinton appointee, dismissed the case in September, finding that it was an attempt at “settling of scores and grievances” and lacked legal merit. But Thursday’s sanctions order came from a motion by a lesser known defendant.

Charles Dolan, a Virginia resident with business connections to another defendant, Igor Danchenko, was also named in the suit. The Trump team described Dolan as a “longtime participant in Democratic politics, having previously served as chairman of the DNC, state chairman of former President Bill Clinton’s 1992 and 1996 presidential campaigns, adviser to Clinton’s 2008 presidential campaign, and having been appointed by Clinton to two four-year terms on an advisory commission at the U.S. State Department.”

In reality, Dolan’s involvement with Clinton’s campaign was simply volunteering to knock on doors in New Hampshire in the last week before the 2016 election.

As Law&Crime previously reported, Dolan filed a motion for sanctions in September, pointing out multiple errors and falsehoods in Trump’s complaint.

In his ruling Thursday, Middlebrooks sided firmly with Dolan and against Trump’s lawyers — Alina Habba and Michael T. Madaio, from the firm Habba Madaio & Associates, and their co-counsel Peter Ticktin and Jamie Alan Sasson, from The Ticktin Law Group.

“When Suing Someone It Helps to Know Where They Live.”

Writing at times in the first person, Middlebrooks, a Bill Clinton appointee, implied that Dolan would have succeed on any one of the three possible grounds for a sanctions motion under Rule 11 of the Federal Rules of Civil Procedure.

Middlebrooks found that Trump’s pleadings “contained factual allegations that were either knowingly false or made in reckless disregard for the truth” — including, for one, the fact that the former president’s legal team apparently insisted that Dolan was a resident of New York, despite his own declaration, signed under penalty of perjury, that he never lived there.

“When suing someone it helps to know where they live, as this can have subject matter or personal jurisdiction significance,” Middlebrooks wrote, taking aim at Trump’s legal team for defending itself by telling the court that “Charles Dolan is an incredibly common name, and Plaintiff’s counsel’s traditional search methods identified countless individuals with said name across the country, many of whom reside in New York.”

Middlebrooks was not pleased.

“While alone not of great significance, this response reflects the cavalier attitude towards facts demonstrated throughout the case,” the judge wrote in his ruling Thursday, adding that Trump’s narrative “remained unchanged” despite multiple credible corrections from Dolan and his lawyers.

Middlebrooks also dismantled Trump’s claims that “nearly all” of the allegations against Dolan came directly from the federal indictment against Danchenko by special counsel John Durham, who led the investigation into the Clinton campaign’s allegations of collusion between Russia the 2016 Trump campaign.

“But this is simply not so,” Middlebrooks wrote. “As was the practice throughout the Amended Complaint, Plaintiff cherry-picked portions which supported his narrative while ignoring those that undermined or contradicted it. Mr. Trump’s lawyers persisted in this misrepresentation after being warned by the sanctions motion, and they doubled down on this falsehood in their response to the motion.”

Middlebrooks concluded that Trump’s lawyers, despite being “warned about the lack of foundation for their factual contentions, turned a blind eye towards information in their possession, and misrepresented the Danchenko Indictment they claim as their primary support.” Their actions, Middlebrooks added, amounts to “precisely the conduct Rule 11 is intended to deter.”

Middlebrooks similarly found that Trump’s lawyers proceeded with the lawsuit despite not being based on any legal theory that could possibly prevail at trial.

“Plaintiff’s Amended Complaint is 193 pages in length, with 819 numbered paragraphs, 14 counts, and it names 31 defendants including Charles Dolan,” Middlebrooks writes in the ruling. “As I stated in my Order entered September 8, 2022, none of these counts stated a claim upon which relief could be granted. Additionally, several of the defendants were not subject to personal jurisdiction, and there was not subject matter jurisdiction over the Federal Defendants.”

“The Amended Complaint was, in its entirety, frivolous,” Middlebrooks added.

In addition to the baseless RICO claim, the judge wrote, Trump’s team pushed an allegation that Dolan committed “conspiracy to commit injurious falsehood.”

The judge also noted that despite Trump’s claim that the defendants, including Dolan, conspired to “maliciously prosecute” him, he was not actually prosecuted.

“This Was A Shotgun Lawsuit.”

In analyzing whether Trump and his lawyers filed the pleading “in bad faith for an improper purpose,” Middlebrooks had some sharp words.

“Not just initiated by a shotgun pleading, this was a shotgun lawsuit,” Middlebrooks wrote. “Thirty-one individuals and organizations were summoned to court, forced to hire lawyers to defend against frivolous claims. The only common thread against them was Mr. Trump’s animus.”

Middlebrooks said that Trump “deliberately misrepresented public documents by selectively using some portions while omitting other information … that contradicted his narrative.”

Every claim was frivolous, most barred by settled, well-established existing law. These were political grievances masquerading as legal claims. This cannot be attributed to incompetent lawyering. It was a deliberate use of the judicial system to pursue a political agenda.

But the courts are not intended for performative litigation for purposes of fundraising and political statements. It is harmful to the rule of law, portrays judges as partisans, and diverts resources that should be directed to real harms and legitimate legal claims. The judiciary should not countenance this behavior and it should be deterred by significant sanctions.

The judge also criticized Habba’s appearances on Fox News, in which she referred to Middlebrooks as a “Clinton judge” and relayed a story in which Trump allegedly urged her to back down from the case if it couldn’t be won, but she said “no, we have to fight.”

“It should be no surprise that we will be appealing this decision,” Habba told Law&Crime in a statement.

Questioning whether Rule 11 sanctions were enough to deter such conduct, Middlebrooks fired a shot across the bow to disciplinary authorities and in the meanwhile, imposed fines. He ordered Trump’s lawyers to pay $50,000 in sanctions and $16,274.73 in Dolan’s attorneys fees and costs.