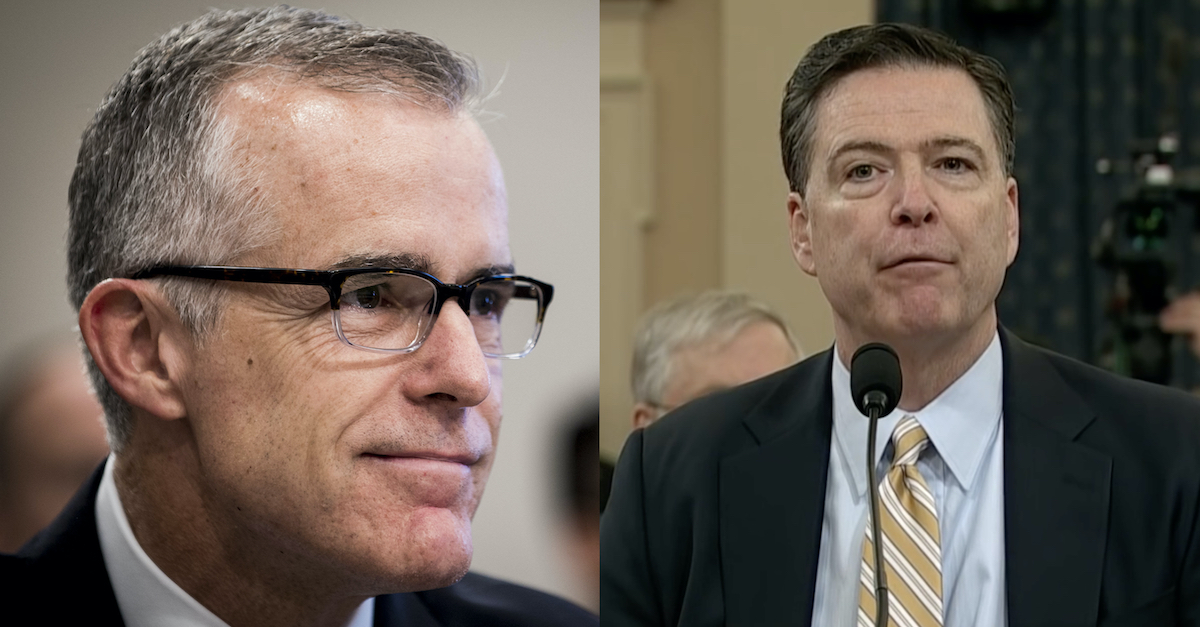 Dated Tuesday but released on Thursday, the Treasury Inspector General for Tax Administration’s (TIGTA) partially redacted report does not mention Comey or McCabe by name in its public version.

However, it reviews the audits from the years both former officials had their taxes scrutinized: 2017 and 2019.

Earlier this year, a New York Times investigation reported on the statistical improbability of both men receiving IRS audits, at a time the agency was being headed by Trump-appointee Charles P. Rettig. The densely written report, spanning 19 pages, alludes vaguely to a media report from that same month in describing what sparked the investigation.

“TIGTA confirmed that the processes and computer programs worked as designed, which reduces the ability to select specific taxpayers for an NRP audit,” the paragraph summarizing the reports topline findings states.

Rettig, whose tenure ended on Nov. 12, requested the watchdog’s investigation after the publication of the Times report. His former agency is now being led by Acting Commissioner Doug O’Donnell.

According to the report, Rettig denied playing any part in selecting National Research Program (NRP) audits — and the watchdog found no evidence contradicting his statements.

“Tax compliance and confidence in the fairness of the tax system could decline if taxpayers believe that the IRS targets specific taxpayers for NRP audits for inappropriate purposes,” George wrote in a statement.

The Times clocked the odds of random audits hitting the men, who raised Trump’s ire during the height of the Russia investigation, as minuscule — but not zero. The paper even quoted another ex-commissioner, John A. Koskinen, as raising an eyebrow.

“Lightning strikes, and that’s unusual, and that’s what it’s like being picked for one of these audits,” Koskinen told the paper in July. “The question is: Does lightning then strike again in the same area? Does it happen? Some people may see that in their lives, but most will not — so you don’t need to be an anti-Trumper to look at this and think it’s suspicious.”

The watchdog found, however, that “tax returns with higher incomes have a higher probability of selection.”

For the strata of taxpayers with the highest chances of selection, the odds of selection were one in 138 in the year 2017. In 2019, that strata faced odds of one in 202, the watchdog said.