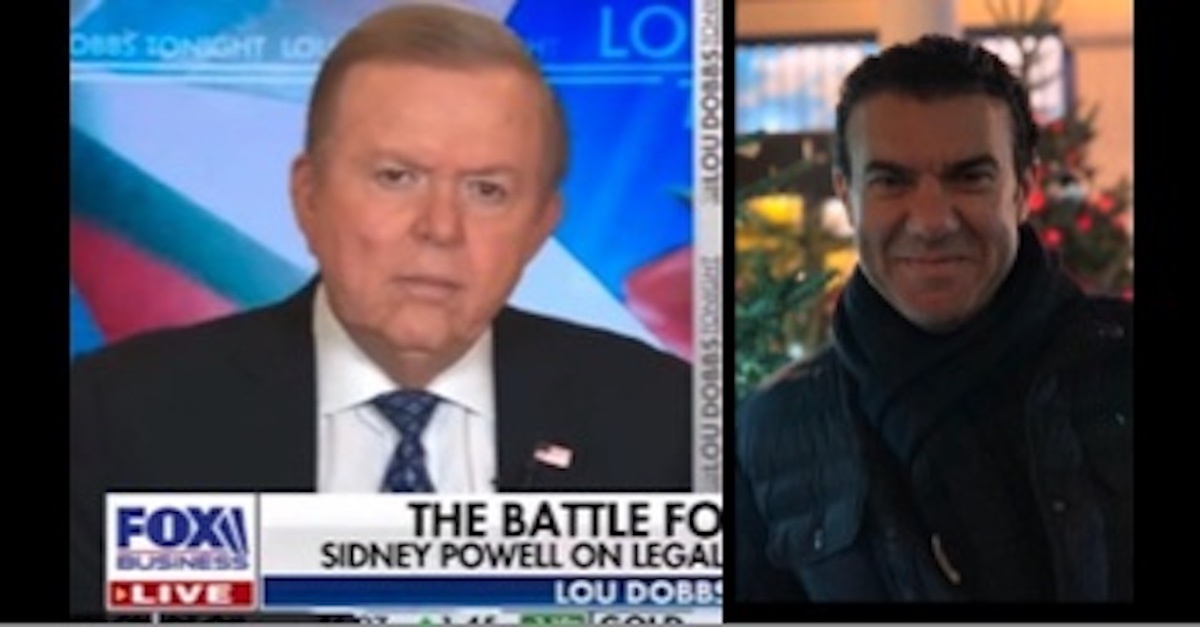 Fox News has asked a federal judge to dismiss a Venezuelan businessman’s defamation claim against the network and one of its now-former hosts over statements made on the network linking him to baseless claims of voter fraud in the 2020 presidential election.

Khalil said that Dobbs and Powell said that Khalil was one of four people who worked with Dominion and Smartmatic to “rig or fix the results” of the election in favor of president Joe Biden. Khalil said that when Smartmatic and Dominion pushed back against claims from Dobbs and others, the defendants doubled down and “falsely identified Mr. Khalil, a Venezuelan businessman who … had no involvement in, or connection to, any United States election and no business dealings whatsoever with Dominion or Smartmatic[.]”

On Monday, Fox and Dobbs responded to Khalil’s complaint with a motion to dismiss, saying that statements made on-air and on Twitter about Trump’s efforts to reverse the election results were opinion and commentary protected by the First Amendment.

The motion describes the Trump team’s legal maneuvers as “unconventional efforts to challenge the results of the election,” and says that coverage was, naturally, widespread.

“While many doubted those claims, no one doubted their newsworthiness,” the motion says. “An attempt by a sitting President to challenge the result of an election is objectively newsworthy. Accordingly, media outlets around the country and the world provided extensive coverage of and commentary on the President’s allegations and the lawsuits they spawned.”

Fox says the statements on Dobbs’ then-show were wholly protected by the First Amendment.

“[T]he statements Khalil challenges are not actionable defamation because Dobbs’ coverage and commentary are protected by the First Amendment and New York privileges emanating from it The First Amendment robustly protects the right of the press to cover and comment on allegations that are inherently newsworthy because of who made them or the context in which they were made,” the motion says. “When a sitting President claims that an election was stolen and assembles a legal team to challenge it, the public has a right to know about those allegations and the litigation surrounding them regardless of whether they are true or false. That protection does not dissipate if the allegations strike some as desperate or ultimately fail to be substantiated.”

Fox argues that Powell, not Dobbs, is responsible for the statements, and that Dobbs was merely doing his job as a host.

“[I]n the course of his election coverage, Dobbs offered precisely the kind of spirited opinion commentary that his viewers had come to know and expect,” the Fox motion says.

Fox cancelled Dobbs’ show and pulled the host from the network in February 2021.

Fox says that Khalil’s complaint is, essentially, an attack on democracy itself.

“The allegations at issue here were unquestionably newsworthy because of who leveled them, where and how they were leveled, and what they concerned,” the motion says. “Seeking to impose hundreds of millions of dollars in liability for such coverage goes beyond a chilling effect: It poses a direct threat to the freedom of the press on which our democracy depends.”

“Rarely Has So Much Been Demanded For So Little”

According to Fox, Khalil’s effort to “pierce the corporate veil” and hold Fox Corporation accountable must fail because he does not allege that anyone at Fox Corporation even knew about any of the challenged statements, let alone was responsible for their publication.

The motion to dismiss points out that while Dobbs and other Fox hosts were clearly hoping for Trump’s success, not everyone at the network felt that way.

“While Dobbs at times encouraged the President’s allies and expressed his hopes that their allegations would be proven true, other hosts at Fox News expressed skepticism,” the motion says.

“Rarely has so much been demanded for so little,” the motion says, noting that Khalil’s complaint stems from a graphic used during a 15-minute interview.

“In the sea of Fox News’ election coverage spanning nearly two months, Khalil’s name surfaced for a few fleeting moments on a single day,” the complaint says, and later adds: “The graphic was displayed for less than two minutes, and the direct mention of Khalil lasted only four seconds.”

Khalil’s attorney said Tuesday that the motion to dismiss failed to address key aspects of his client’s complaint.

“Mr. Khalil rejects as false the Fox Defendants’ allegations about him, and notes, in any event, they ignore the basis of Mr. Khalil’s basic claims that Fox knowingly participated in publishing patently false claims that Mr. Khalil had anything to do with the 2020 US Presidential election,” attorney Sigmund Wissner-Gross told Law&Crime in a statement. “Mr. Khalil had no connection to Smartmatic, nor to Dominion, nor in any respect to the 2020 US Presidential election.”

Powell replied to Khalil’s lawsuit earlier this month, saying that she isn’t subject to the court’s jurisdiction and that she still believes that what she said on Dobbs’ show is true.

Powell led a multi-state effort to overturn the 2020 presidential election results. She nicknamed her litigation the “Kraken” after the octopus-like monster of mythology dramatized in the film “Clash of the Titans.” However, her efforts so far have had the opposite of their intended effect: just as the “Kraken” was slain, so was Powell’s litigation in Michigan, Wisconsin, Arizona, and Georgia. In Michigan, a federal judge referred Powell and her eight co-counsel to their respective bars for “possible suspension or disbarment.” One of those co-counsel has represented Powell in the Khalil case: Howard Kleinhendler.

Since Biden’s win in November 2020, Trump and his allies, including Dobbs and Powell, have continued to push widely-debunked voter fraud conspiracy theories about the results. Both Smartmatic and Dominion have sued Fox News and various current and former hosts over some of these claims. In December, a Delaware judge denied Fox’s effort to dismiss the Dominion lawsuit, saying that, based on Dominion’s pleadings, he “can infer that Fox intended to avoid the truth.”

Read Fox’s motion to dismiss, below.