Former ‘Smallville’ Actress Allison Mack, ‘Both a Slave and a Master,’ Gets Light Three-Year Sentence for ‘Monstrous’ NXIVM Conspiracy 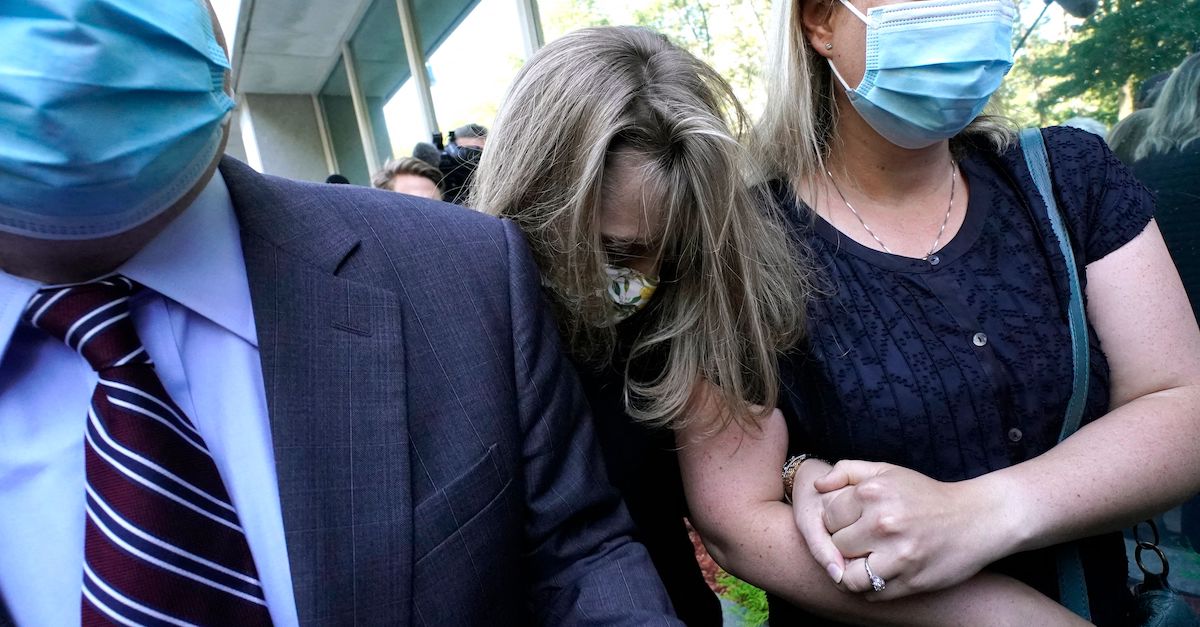 German-born American TV actress Allison Mack, center, arrives at Brooklyn Federal Court on June 30, 2021 in New York to be sentenced for her admitted role in the alleged sex cult NXIVM. (Photo by Timothy A. Clary/AFP via Getty Images.)

Casting the former “Smallville” actress as “both a slave and a master” inside Keith Raniere‘s NXIVM cult, a federal judge sentenced Allison Mack to three years in federal prison for two racketeering offenses during an emotional 90 minute sentencing hearing on Wednesday.

“When it came to DOS and the monstrous crimes he committed in that organization, you were an essential accomplice,” U.S. District Judge Nicholas Garaufis told Mack in the courtroom, referring to the secret “sisterhood” she led in Raniere’s service.

“Mr. Raniere could not have done that without you,” Garaufis added.

One of Mack’s victims, Jessica Joan, likened Mack to another alleged sex-trafficking organization during a thundering monologue in court where she called them the “most evil monsters” she ever met.

“She is the Ghislaine Maxwell to Keith’s Jeffrey Epstein,” Joan said, recounting falling “prey” to the duo after a history of molestation and abuse.

Joan addressed Mack directly during her speech and fastened her eyes on the disgraced actress, who looked back but remained expressionless.

Mack delivered a tearful apology to her victims, calling her behavior “abusive,” “abhorrent,” and “illegal.”

“I renounce Keith Reniere and his teachings,” she intoned.

Filled with themes of remorse and guilt, Mack’s speech echoed the sentiments of a written letter she previously submitted with the court.

“I threw myself into the teachings of Keith Raniere with everything I had,” Mack wrote in a letter to the court. “I devoted my loyalty, my resources, and, ultimately, my life to him. This was the biggest mistake and greatest regret of my life.”

“I am sorry to those of you that I brought into Nxivm,” the letter continued, directly addressing those whom she admits she harmed. “I am sorry I ever exposed you to the nefarious and emotionally abusive schemes of a twisted man.”

Mack was for years a member of NXIVM (pronounced ‘NEX-ee-um’), an organization led by Keith Raniere. Raniere, 60, a self-styled self-help guru known as “Master,” “Grandmaster,” and “Vanguard” within the organization, was sentenced to 120 years in federal prison for a series of crimes. He was arrested just before an oral sex session was supposed to begin at a villa in Mexico, his case revealed; he was convicted as charged after just four hours of deliberation. The jury agreed with federal prosecutors that Raniere’s crimes including forced labor, human trafficking, sex trafficking, money laundering, child exploitation, possession of child pornography, racketeering, identity theft, obstruction of justice, wire fraud, and visa fraud — despite Raniere’s attempt to proclaim his innocence through his entire trial and his subsequent sentencing proceeding. 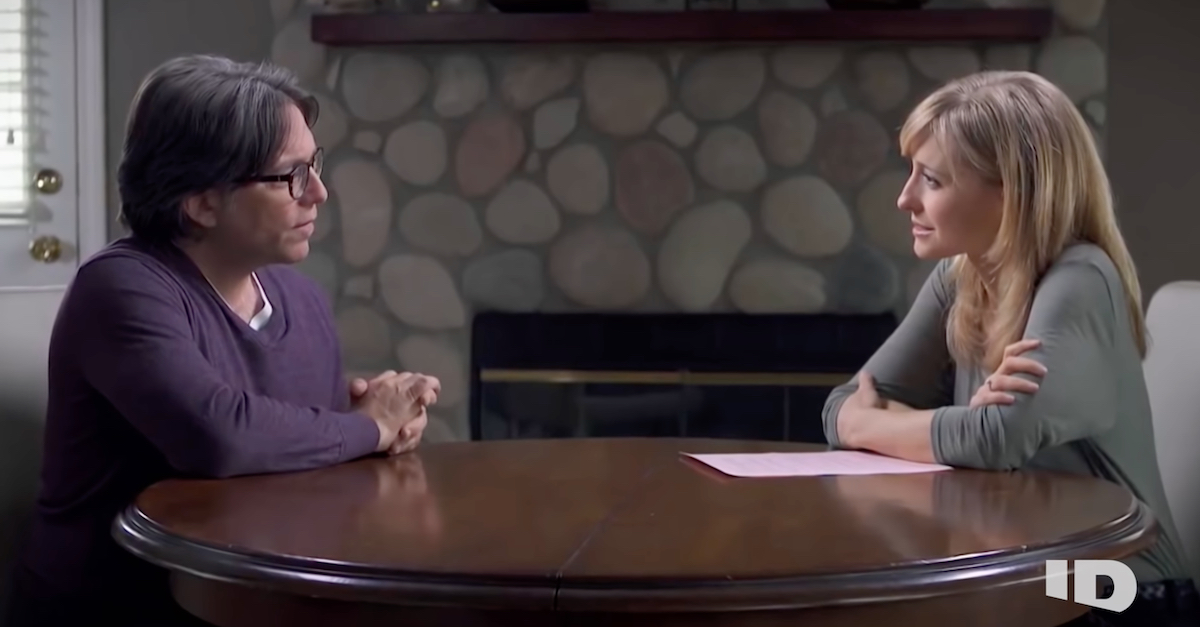 A little more than a week ago, prosecutors revealed that Mack’s late-breaking cooperation helped to bring down Raniere just a month before trial. The actress produced a recording that showed the cult leader apparently instructing her to hold women down “almost like a sacrifice” and exerting control over them through “collateral.”

In one part of the tape, Raniere appears to brainstorm the script of the branding ceremony.

As Judge Garaufis noted, the women did not know they were being branded with Raniere’s initials in their pubic area.

Joan called herself one of the “lucky” ones—in that she was not among the women “branded like cattle.”

“Both a Slave and a Master”

Since her guilty plea, Mack has spent the past three years living with her family, which supported her in court. Garaufis’s sentence is well below the federal sentencing guidelines, calculated between 14 and 17.5 years in prison.

The judge justified that on her government cooperation and status as partly, a victim.

“In the language of DOS, you were both a slave and a master,” he said, noting that Mack “capitalized” on her celebrity to hold power within the organization.

Mack was not the only bold face name caught up in the NXIVM cult. Seagrams liquor heiress Clare Bronfman also pleaded guilty to much lesser counts and avoided serious jail time.

Federal prosecutors also agreed that the federal sentencing guidelines were too high in light of Mack’s contributions to the investigation and prosecution. Mack, wearing a black dress and a floral white face mask, thanked prosecutors and the judge for leading her toward recovery and leading her away from her delusions.

“I rejected everyone who tried to tell me the truth,” Mack said.

For her defense attorney Sean Buckley, the fact that Mack’s family, friends, and loved ones filed up the pews of the majestic ceremonial federal courtroom was evidence itself that his client has reformed. She previously rejected her family when in Raniere’s thrall, Buckley said.

Though she received a lower term of incarceration than expected, Mack’s defense team argued that she deserved no time in prison whatsoever. That was a bridge too far for Garaufis, who set her surrender date for Sept. 29.

The defense characterized Mack as a woman whose hectic career left her devoid of meaningful family connections and therefore as someone ripe for manipulation by Raniere. They argued in a sentencing memorandum filed late Friday that Raniere was the true culprit and that Mack has gone through a positive “transformation” since leaving NXIVM.

From that lengthy defense memorandum:

For more than a decade, Ms. Mack put her trust in a depraved manipulator, and let herself be indoctrinated. Ms. Mack knows that she has committed grave wrongs as part of her association with Raniere. She will be forever remorseful for her failings during that dark time. However, as set forth above, the arc of Ms. Mack’s life is now trending in a positive direction, towards truth, healing, education, and family. As a result, we respectfully submit that the Allison Mack standing before the Court at her sentencing hearing should receive a sentence that accounts for the progress she has made in charting this new path.

Judge Garaufis noted that some victims expressed ambivalence about Mack considering her journey to recovery. Another victim of Mack, Tabitha Chapman, delivered a prerecorded statement in court reflecting that sentiment.

In the video, Chapman said that Mack subjected her to “cruelty beyond imagination,” regularly humiliating her and taking shots at her weight.

She recounted that Mack told her that being raped came with a choice either to suffer through it or try to experience joy.

Moving from Albany, N.Y., where the cult operated, to California, Chapman said she since pursued studies in psychology. Despite themes of anger, trauma and sadness, Chapman ultimately left Mack with a wish for a “swift recovery.”

Outside of court, Joan told reporters that she respected the judge’s ruling but thought it was too lenient. Mack was swarmed by reporters as she and her attorneys exited the courthouse. They remained silent. 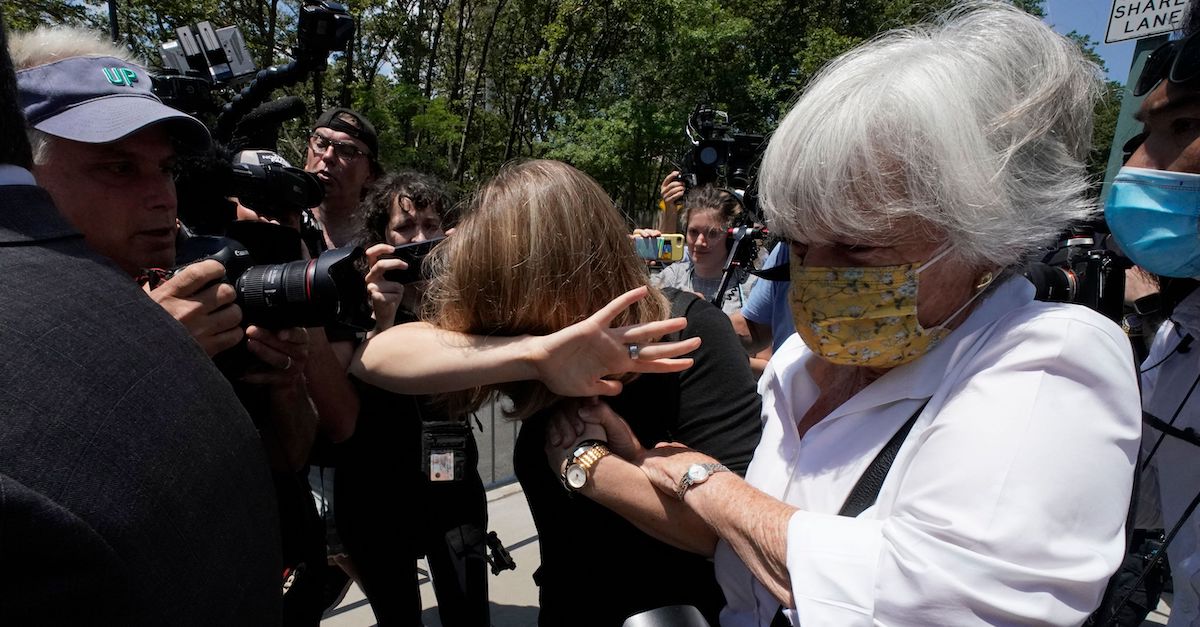 Mack covered her face while leaving federal court on June 30, 2021, after being sentenced.  (Photo by Timothy A. Clary/AFP via Getty Images.)

Read the judge’s sentencing memorandum below: