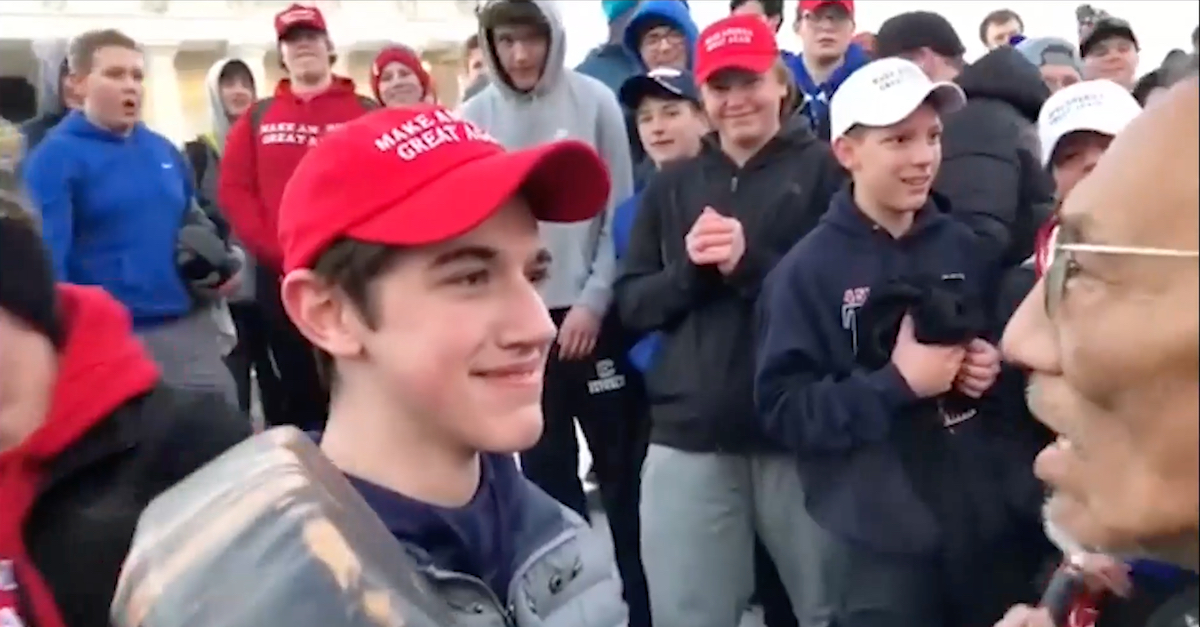 Nick Sandmann, who at the time was a Covington Catholic student, appears in a screengrab taken from a video filed as an exhibit in federal court.

After years of politically charged litigation, former Covington Catholic High School student Nick Sandmann on Tuesday lost a round of high-profile defamation lawsuits against five mainstream media companies at the summary judgment stage. That’s according to court dockets and an opinion and order signed by a federal judge in the Eastern District of Kentucky.

Sandmann sued the five organizations in question — and a few others, including CNN and NBC — on March 2, 2020. The lawsuits alleged that various articles and broadcasts defamed Sandmann by characterizing his actions toward Nathan Phillips, a Native American activist, on Jan. 18, 2019 in Washington, D.C., as nefarious. From Sandmann’s original lawsuit against ABC:

ABC’s reporting conveyed, among other things, the false and defamatory gist that Nicholas was the face of an unruly hate mob of hundreds of white, racist high school students who physically assaulted and harassed Native Americans who were engaged in peaceful demonstrations, song and prayer at the National Mall.

ABC accused Nicholas of behavior constituting menacing racial intimidation of Phillips, a Native American political activist, while Phillips was purportedly engaged in peaceful song and prayer at the Lincoln Memorial.

Sandmann’s ABC lawsuit characterized the “truth” of the matter as follows:

ABC’s accusations against Nicholas are totally, provably, and unequivocally false.

The truth is that, after the Indigenous Peoples March was over, Phillips approached Nicholas and the other students from afar, bypassed wide open steps to his alleged destination of the Lincoln Memorial, specifically confronted Nicholas, and never attempted to move past, around, or away from Nicholas, as Nicholas stood quietly for several minutes in a “Make America Great Again” hat while Phillips beat a drum and sang loudly within inches of Nicholas’ face.

The truth is that, at the time of the confrontation by Phillips, Nicholas and his classmates from Covington Catholic High School (the “CovCath students”) were assembled on the stairs of the Lincoln Memorial at the direction of their chaperones for buses that would take them home to Northern Kentucky.

The truth is that, Nicholas and his CovCath classmates were bullied, attacked, and confronted with racist and homophobic slurs and threats of violence by the Black Hebrew Israelites, a recognized hate group, before being unexpectedly confronted without explanation by Phillips, an activist, who proceeded to target Nicholas while chanting and beating a drum inches from his face and being flanked by activist companions filming the event in the hopes of capturing a viral sensation that would be used to advance, via social media, an ulterior political agenda.

Phillips specifically targeted Nicholas and placed himself directly in front of Nicholas.

All parties moved for various forms of summary judgment, and a judge agreed to dismiss the cases by agreeing with the five media defendants and disagreeing with Sandmann’s attorneys. Senior U.S. District Judge William O. Bertelsman, a Jimmy Carter appointee, explained the procedural machinations afoot:

Summary judgment is a procedural mechanism which resolves cases without a trial.

Bertelsman noted that CNN “filed an early motion to dismiss which the Court granted” on July 26, 2019.

“In that opinion, the Court held that none of the statements were actionable for various reasons: some were not ‘about’ Sandmann; some were statements of opinion; and/or some were not subject to a defamatory meaning,” Bertelsman recalled.

In other words, the case more or less flatlined once before. Sandmann filed a motion to reconsider; the judge agreed to resuscitate the matter on “narrow” grounds. At issue in the resurrected case were “Phillips’s statements that Sandmann had ‘blocked’ Phillips and ‘would not allow him to retreat,'” the judge wrote.

“[J]ustice required that discovery be conducted as to the context of those statements,” the judge recalled.

Bertelsman noted that “the only evidence filed in the record consists of: (1) Sandmann’s deposition; (2) a declaration under oath by Phillips; (3) seven declarations under oath by persons in attendance at the incident; and (4) a collection of video recordings taken at the National Mall that day.”

A little more than a page of bullet points recapped what the judge considered the salient points of that deposition; among them were the following:

A declaration from Phillips provided the following details, the judge wrote:

A group of six other witnesses declared that Phillips moved toward Sandmann, according to the judge. Those six witnesses were in Washington, D.C., to attend the Indigenous Peoples March which attracted Phillips, the order attests; only one previously knew Phillips, Bertelsman indicated.

“Five of the six individuals aver that it was their impression that Sandmann blocked Phillips from moving forward,” the judge noted.

The final witness, a classmate of Sandmann’s, “moved away from the group at the time of the encounter between Sandmann and Phillips and did not observe it directly,” the judge wrote.

Twenty videos were submitted into evidence; only six were “helpful,” Bertelsman said.

“What a viewer might conclude from these videos is a matter of perspective,” Bertelsman wrote. However, the judge opined that the following was “clearly” depicted:

In analyzing the remaining legal issues, Bertelsman said some of Sandmann’s legal arguments were “without merit.”

“As noted above, the Court expressly held that while the allegations of Sandmann’s complaints passed the ‘plausibility’ test at the pleading stage, and that discovery should be had on the context of Phillips’s statements, the actionability of the statements would be revisited on summary judgment,” Bertelsman wrote. “Sandmann’s insistence that the Court cannot now revisit this legal issue is ironic considering that he vigorously, and successfully, moved the Court to reconsider its initial ruling in The [Washington] Post case” (italics added).

“In sum, the law of the case doctrine does not preclude this Court from reconsidering anew on summary judgment legal issues raised at the pleading stage,” Bertelsman concluded.

In other words, in light of the terse discovery, Sandmann’s claim failed.

Specifically, as to the claim that Sandmann “blocked” Phillips from advancing, Bertelsman ruled as follows:

Applying the above legal authorities, and with the benefit of a more developed record, the Court concludes that Phillips’s statements that Sandmann “blocked” him and “wouldn’t allow [him] to retreat” are objectively unverifiable and thus unactionable opinions.

Instead, a reasonable reader would understand that Phillips was simply conveying his view of the situation. And because the reader knew from the articles that this encounter occurred at the foot of the Lincoln Memorial, he or she would know that the confrontation occurred in an expansive area such that it would be difficult to know what might constitute “blocking” another person in that setting.

Judge Bertelsman then criticized Sandmann’s lawyers for arguing a premise that the evidence doesn’t support:

Interestingly, plaintiff’s responsive memorandum to the joint motion for summary judgment argues that “blocking” is factual because “it involves the oppositional position of two human bodies in a confined space.” (Case No. 20cv23, Doc. 61 at 42) (emphasis added). But, as the videos depict, the area where this encounter occurred was a huge, outdoor setting, not a confined space.

“The media defendants were covering a matter of great public interest, and they reported Phillips’s first-person view of what he experienced,” the judge wrote. “This would put the reader on notice that Phillips was simply giving his perspective on the incident.”

“Therefore, in the factual context of this case, Phillips’s ‘blocking’ statements are protected opinions,” Bertelsman rationed. “This holding moots all other motions before the Court.”

The judge then penned a few lines in conclusion:

The Court allowed these cases to proceed to discovery based on the allegations of plaintiff’s complaints and a belief that some development of the context of this incident may be helpful. The parties shrewdly agreed to phased discovery allowing the above legal issues to be revisited by the Court before the parties embarked on further expensive and time-consuming discovery and possibly trials, all of which would be wasted should the United States Court of Appeals for the Sixth Circuit agree with this Opinion.

And finally, the Court has reached its conclusions with fealty to the law as its primary concern, with no consideration of the rancorous political debate associated with these cases.

“We are disappointed with the decision,” McMurty told Law&Crime. “We intend to appeal.”