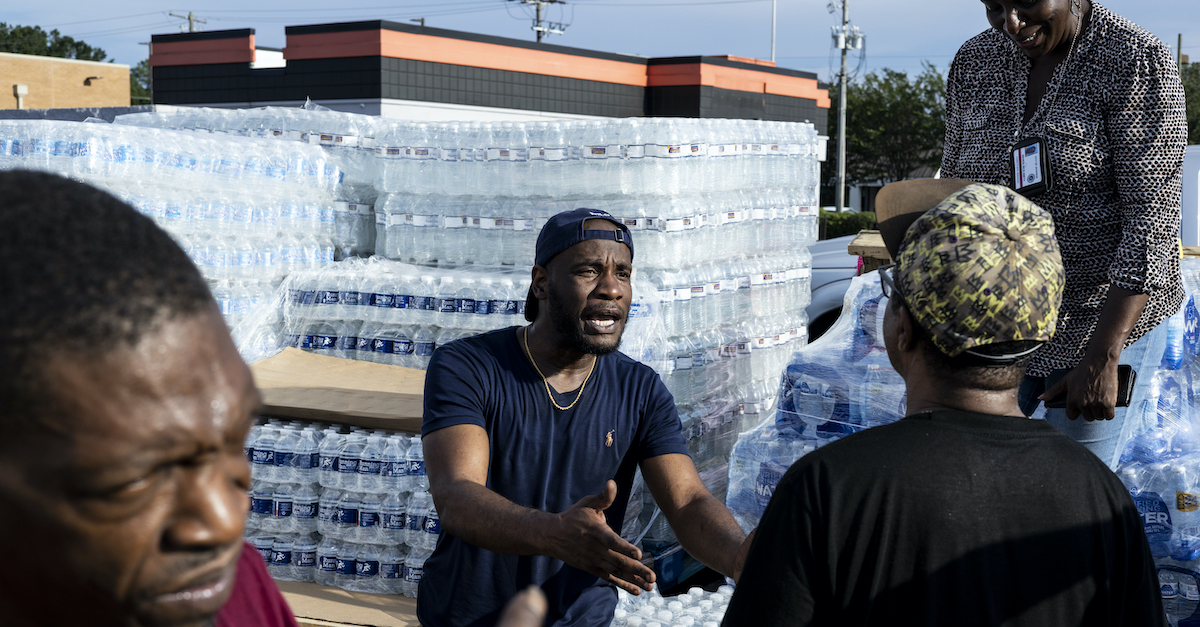 Jabari Omari, a Jackson city employee, talks with a resident while helping hand out cases of bottled water at a Mississippi Rapid Response Coalition distribution site on Aug. 31, 2022 in Jackson, Miss. (Photo by Brad Vest/Getty Images)

Federal authorities have come to an agreement with state and local officials in what appears to be a step toward solving the water crisis in Jackson, Mississippi.

“Today, the United States filed a proposal in federal court that — if approved by the court — would appoint an Interim Third Party Manager to stabilize the city of Jackson, Mississippi’s public drinking water system, and build confidence in the system’s ability to supply safe drinking water to the system’s customers,” the Justice Department announced in a press release Tuesday, adding that both the city of Jackson and the Mississippi State Department of Health (MSDH) have signed the order and agreed to its terms.

The filing comes the same day that the DOJ filed a complaint on behalf of the Environmental Protection Agency (EPA) against the city of Jackson, “alleging that the city has failed to provide drinking water that is reliably compliant with the Safe Drinking Water Act (SDWA) to the system’s customers.”

On July 29, MSDH issued a boil-water notice for Jackson’s public drinking water system due to “turbidity,” or cloudiness in the water. The next month, the city declared an emergency after excessive rain and flooding stopped the system from delivering water to some 160,000 people living in the city and some areas nearby that relied on the water system.

“That meant that many of those residents had no running water to drink, or to use for basic hygiene and safety purposes like washing hands, showering, flushing toilets, fighting fires, or washing dishes,” the DOJ’s press release said.

The water pressure was restored on Sept. 6. The boil-water notice remained in effect until Sept. 15.

As Law&Crime previously reported, a civil rights class action lawsuit was filed in September over the failure to provide clean drinking water. As the lawsuit notes, more than 82% of the population in Jackson is Black, with nearly a quarter of residents living in poverty; census figures show that Mississippi’s overall population is nearly 60% white.

According to the agreement, Henifin will have the authority to:

Take charge of the Water Sewer Business Administration, the arm of the city responsible for billing water users;

Implement capital improvements to the city’s public drinking water system, in particular, a set of priority projects meant to improve the system’s near-term stability, including a winterization project meant to make the system less vulnerable to winter storms; and

Correct conditions within the city’s public drinking water system that present, or may present, an imminent and substantial endangerment to the health of the city’s residents.

While the third-party arrangement is intended to address at least some of the problems that gave rise to the water crisis earlier this year, the DOJ’s complaint on behalf of the EPA alleges serious wrongdoing on the part of the city, including staffing shortages and repeated failures to comply with efforts to bring the drinking water system into compliance.

According to the DOJ, the city’s emergency measures are not enough.

“The emergency response is not designed to address the City’s financial and technical capacity shortfalls that have long hindered the City’s ability to operate the System in compliance with the law and in a manner that ensures a reliable source of drinking water for System users,” the complaint says. “Absent appropriate relief, the City will continue to experience these shortfalls and the System’s users remain at risk of losing water access and dealing with boil water notices during severe weather events and during System failures.”

U.S. Attorney General Merrick Garland praised the DOJ’s moves as a crucial step to restoring reliable access to water in the region.

“Today the Justice Department is taking action in federal court to address long-standing failures in the city of Jackson’s public drinking water system,” Garland said in the press release. “The Department of Justice takes seriously its responsibility to keep the American people safe and to protect their civil rights. Together with our partners at EPA, we will continue to seek justice for the residents of Jackson, Mississippi. And we will continue to prioritize cases in the communities most burdened by environmental harm.”

Read the agreement, via the DOJ, here.

Read the DOJ’s complaint against the city of Jackson here.