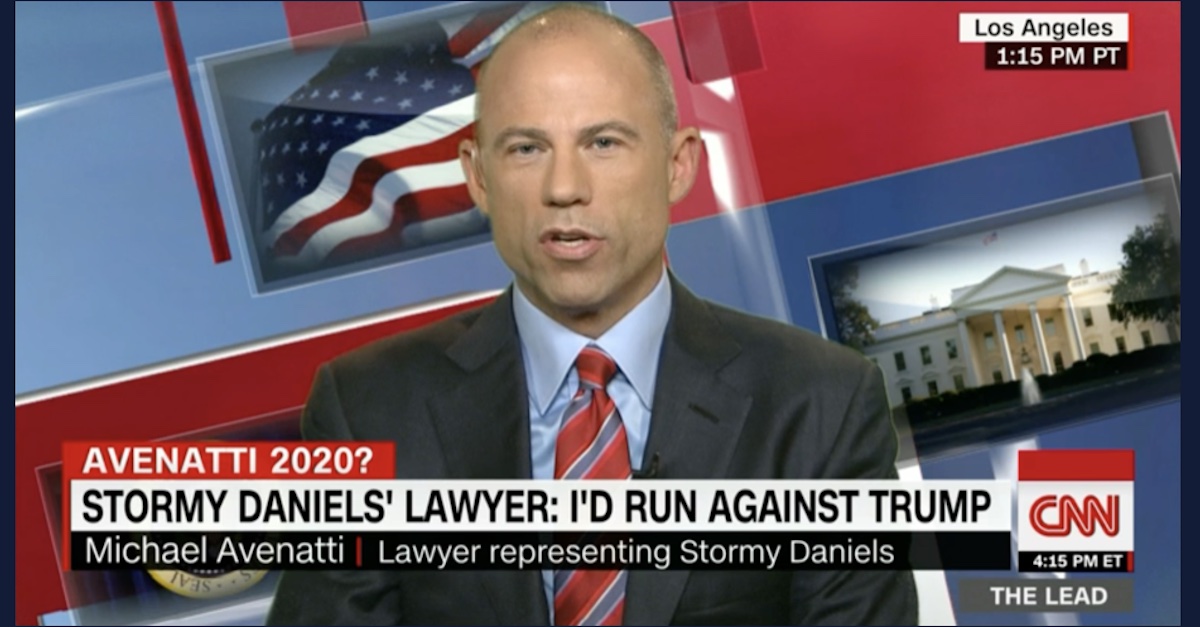 Michael Avenatti appears on CNN in July 2018 to discuss a possible bid for the Democratic nomination for U.S. president. (screenshot via CNN)

The judge who sentenced Michael Avenatti to 14 years in prison on Monday explains his reasoning in a new 20-page order that details not why the disgraced lawyer’s sentence is so harsh but why it’s lenient.

“As is the case with most human beings, there is the ability to do great good on an individual level or even a national or global scale. But there is also the ability to do great evil through willfully inflicting great harm on others through greed, arrogance, lying, uncaring dealing with others and blind-sightedness. As noted above, Avenatti has done many noble and good things in his life, some reflected in this case. But he has also done great evil for which he must answer,” Senior U.S. District Judge James V. Selna wrote as his final comment. “His actions in this case and in the relevant conduct show an abandonment of some of the most basic principles of fairness. That is all the more tragic where he received a fine education and achieved academic excellence, was presented with challenging opportunities at major law firms, and had the opportunity to build a series of his own successful law firms. It is now time for him to pay his debts to his victims, the Government, and to society in general.”

The 20-page order accounts for each sentencing enhancement Selna imposed on Avenatti for stealing millions of dollars from clients in a years-long fraud that turned his Newport Beach law firm into a Ponzi scheme.

It also explains why Selna ordered the sentence not begin until after Avenatti completes his sentences out of New York for trying to extort Nike and for defrauding the client who made him famous, adult film star Stormy Daniels, a term which is currently scheduled to lapse on Jan. 27, 2026. Prosecutors recommended a consecutive sentence, but the U.S. Probation Office recommended concurrent.

Avenatti also asked for a six-year concurrent sentence, arguing with Selna while representing himself pro se during the three-hour hearing on Monday, then asking for mercy and another chance at life during the standard allocution that criminal defendants are allowed at sentencing. Avenatti had received a tentative ruling from the judge outlining his thinking on the sentence, and Selna said early in the hearing that he was looking at 168 months.

The final ruling notes that Avenatti’s crimes in the California case “occurred before Avenatti commenced serving time for the New York cases, the Court has discretion to impose a concurrent, partially concurrent, or a consecutive sentence. The Court imposes the sentence consecutively.”

“One of the usual bases for a concurrent sentence is absent here: the present case is not relevant conduct to his New York convictions,” Selna wrote.

Avenatti “acknowledges the wrongfulness of his conduct when he asserts that the ‘nature of the attorney-client relationship allows for an inherent inequitable power dynamic,'” Selna wrote. “Understanding that unequal dynamic, he nevertheless exploited his clients.”

Still, the judge didn’t agree with all recommendations from prosecutors, including that Avenatti not be credited for acceptance of responsibility. Selna rejected their argument, writing that “when Avenatti allocuted, he admitted every essential element of the crimes to which he pled.”

“That the Government believes that Avenatti should have admitted more does not diminish the sufficiency of what he did admit,” according to the order.

Selna also disagreed that a tweet Avenatti wrote after a Los Angeles Times article about his defrauding of Gardner warranted a sentencing enhancement for obstruction of justice. But he concluded other factors supported the enhancement, including Avenatti’s forgery of his former law partner Michael Eagan‘s signature in U.S. Bankruptcy Court and his perjury in judgment debtor exams.

A 2003 George W. Bush appointee and former longtime partner at O’Melveny & Myers LLP, Selna also easily found that Avenatti’s deserved more time because he was in a position of trust as a lawyer when he committed his crimes.

Before 2005, Selna would have been required to sentence Avenatti in accordance with the standard range associated with his final “offense level” as defined through the U.S. Sentencing Commission guidelines, which, under the judge’s calculations, would be at least 262 months, which is nearly 22 years. But the U.S. Supreme Court’s 5-4 ruling in United States v. Booker allows judges to sentence outside guidelines set by the U.S. Sentencing Commission for a variety of reasons, and Selna cited detailed them while explaining his departure to 168 months, including mentioning that Avenatti’s mother “once physically attacking him.”

The order cites Booker, saying Selna is exercising his discretion under the ruling “but in adopting the present sentence, the Court is mindful that whether a sentence falls within or without the Guideline range, the Court’s ultimate decision is a reflection of its discretion.”

Through his standby counsel H. Dean Steward, Avenatti filed notice of appeal of the sentence to the 9th Circuit U.S. Court of Appeals. He also filed an objection to any “issuance of any post-sentencing decision, explanation, or memorandum,” saying his appellate notice divested Selna of jurisdiction. The judge quickly rejected it, calling it “frivolous and patently obstructionist.”

Avenatti’s victims Alexis Gardner and Geoffrey Johnson spoke at his sentencing. Greg Barela is living outside California and did not attend. Avenatti’s fourth victim, cosmetics executive Michelle Phan, also were in court, but neither spoke.

Tran hired Avenatti amid the height of his fame to negotiate Phan’s departure from Ipsy, a cosmetics company she built after rising to fame hosting makeup tutorials on YouTube. Wire fraud sentences are at their core driven by the total amount of money involved, so just Avenatti’s theft of Phan’s $4 million could have put him in prison for nearly 20 years if all sentencing enhancements are factored.

Gardner was living in her car when Avenatti started representing her in a dispute with her ex-boyfriend, NBA player Hassan Whiteside. He negotiated a $2.75 million settlement with Whiteside for reasons not publicly disclosed, but as established in trial, he never sent Gardner her share of the money.

Instead, he used $2.5 million to buy a jet with another client, which was seized by federal authorities after his arrest in March 2019, then spent much smaller amounts of money periodically on Gardner while telling her Whiteside and his team were wrongly withholding the money.

Johnson is Avenatti’s earlier victim, having hired him in November 2011 to sue Los Angeles County after he became a paraplegic during a suicide attempt in jail following abuse by guards and inmates. Avenatti secured a $4 million settlement in 2015, then paid Johnson $900 to $1,900 every month for four years while lying to him about the status of the settlement. Johnson lost his Social Security benefits after Avenatti didn’t respond to the office’s questions about the settlement.

Barela, meanwhile, is a businessman whom Avenatti secured a $1.6 million settlement in a civil suit. But like with Johnson and Gardner, Avenatti never gave Barela his share of the money. Instead, he lied to Barela for months as Barela continued to spend time at his law firm and hosted a watch party for Avenatti’s appearance on the news show 60 Minutes in 2018.

Avenatti admitted to defrauding Johnson, Gardner, Barela and Phan when he pleaded guilty to the four wire fraud charges.

He argued the total loss amount was less than $3.5 million, but Assistant U.S. Attorneys Brett Sagel and Ranee Katzenstein said he should be punished for $12.35 million, the full amount of the settlements.

Restitution for each client, however, was limited to the amount of money they were due through their attorney-client agreement with Avenatti. That means Phan is owed $4 million, Johnson is due just under $1.6 million, Gardner is owed $1.47 million and Barela is owed $633,341.

Selna’s order explains the restitution while also rejecting Avenatti’s argument that the total loss amount for his wire fraud crimes should “be offset the fees and costs specified in his client agreements.”

“He ignores the fact that a lawyer by his conduct may forfeit his fees,” Selna wrote. The judge said later, “His objections to some of the Conditions are not well taken. By his own tally, Avenatti owes millions in restitution. An order to apply all sources of income to that obligation could not be more linked to curing the harm here.”

Avenatti was plagued by financial improprieties when he burst onto the national political scene in 2018 as Daniels’ lawyer, promoting himself as Trump’s chief antagonist while drawing a fan base within the Democratic party that pushed him to consider a run for the U.S. presidency. The Daniels trial established how Avenatti formed a fast friendship with Luke Janklow, son of the legendarily powerful late literary agent Morton Janklow and head of Janklow & Nesbit in New York.

Janklow brokered Daniels’ book deal, but he gave a much larger deal to Avenatti that resulted in only partial payment for reasons not stated in trial. Janklow testified that he had been introduced to Avenatti by CNN’s Anderson Cooper, a longtime close friend of Janklow’s who told him Avenatti had his own star power.

Daniels currently is suing Janklow in the Southern District of New York for breach of contract related to his decision to send her payments to Avenatti instead of her.