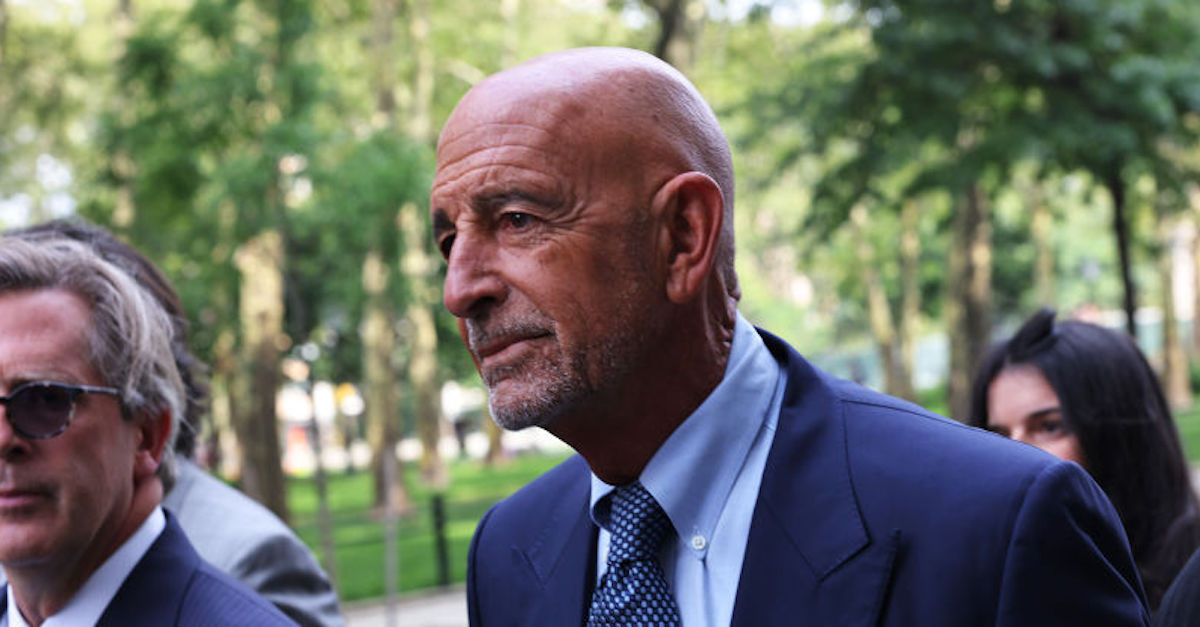 A former chairman of Donald Trump’s inaugural committee accused of trying to use his high-level connections to influence U.S. policy toward the UAE says that the GPS ankle monitoring he has been forced to wear as a condition of his pretrial release will make it impossible for him to get a fair trial.

Thomas Barrack, a California-based billionaire investor and Trump ally, faces charges of illegally acting as a foreign agent, obstruction of justice, and making false statements to federal law enforcement. His name surfaced during the course of Robert Mueller’s investigation into the 2016 Trump campaign’s ties to Russia.

Barrack is believed to have convinced Trump to hire Paul Manafort — convicted of bank fraud and witness tampering before ultimately being pardoned by Trump — to run the former president’s 2016 campaign.

Barrack was indicted in July of 2021 and charged with conspiring to act as agents of the United Arab Emirates and use their government-insider status to influence policy and improve public opinion of the UAE. As Law&Crime previously reported, co-defendants, Matthew Grimes and Rashid Sultan Rashid Al Malik Alshahhi (also known as Rashid Al Malik and Rashid Al-Malik) were also charged. Al Malik fled the U.S. days after being interviewed by law enforcement and is reportedly still on the lam.

He pleaded not guilty and was released on a $250 million bond package that was secured by $5 million in cash and included more than 21 million . He also had to turn over his passport and submit to a daily curfew.

Barrack had implied that the charges against him are politically motivated, having been filed after a “change in administration.” Judge Brian Mark Cogan, a George W. Bush appointee, said in a June ruling that there was not enough evidence to support this claim.

In a Monday filing, lawyers for Barrack said that the government’s insistence on using GPS monitoring to track their client will make it tougher for him to get a fair trial. Barrack had filed a motion on July 29 to have his pretrial release conditions changed — specifically the electronic monitoring requirement that tracking Barrack’s movement using GPS technology.

“Mr. Barrack’s history of compliance with his bail conditions over the last twelve months demonstrates that the government’s flight risk concerns at the outset of this case were overstated and validates the initial bail recommendation by Pretrial Services, which did not include an ankle monitor,” attorneys Daniel Petrocelli and James Bowman said in the letter motion, noting that their client’s request to move the ankle monitor was “modest in scope” but “deeply important to Mr. Barrack’s hope of securing a fair trial.”

Barrack’s lawyers said that the government’s opposition to their client’s request to remove electronic monitoring relied on the wrong law and didn’t acknowledge legal authority that contradicted its stance.

“[T]he government incorrectly asserts that Mr. Barrack’s conditions of release can only be modified where there has been a substantial change in circumstances,” the attorneys said in Monday’s letter. Petrocelli and Bowman said the basis for Barrack’s request was the court’s authority to amend a defendant’s pretrial release “at any time,” and that no change of circumstances is required.

“Courts in the Second Circuit (including in this district) have held that a district court may revisit conditions of release on its own authority, even where there is no change in circumstances,” the letter said (citations omitted).

Barrack’s lawyers emphasized Barrack’s “modest” request to remove the GPS tracking device and said that the feds had “overstated” the risk of Barrack not appearing for trial.

“Mr. Barrack’s request to remove his ankle monitor is modest in scope, but deeply important to Mr. Barrack’s hope of securing a fair trial,” the filing said. “While no change in circumstances is required to modify this condition, Mr. Barrack’s history of compliance with his bail conditions over the last twelve months demonstrates that the government’s flight risk concerns at the outset of this case were overstated and validates the initial bail recommendation by Pretrial Services, which did not include an ankle monitor.”

The letter said that the remaining release conditions are “more than sufficient to ‘reasonably assure’ his appearance [at trial] without continued GPS monitoring.”

Indeed, as Barrack’s lawyers said in his initial letter motion to have the monitor removed, he not a flight risk because he believes his innocence will be affirmed at trial.

“Mr. Barrack is eager for the trial in this case,” the letter said. “[H]e is innocent and has consistently requested the first available trial date so that he can answer the government’s accusations and clear his name.”

Prosecutors oppose the change, arguing that Barrack has plenty of reasons to flee the United States.

“[T]he government respectfully submits that the risk of flight recognized by the Court at the outset of the case has only grown more acute as trial approaches,” federal prosecutors said in a filing on Aug. 5, citing multiple circumstances that they say support the need to keep close tabs on Barrack.

“[A] grand jury has returned a superseding indictment charging Mr. Barrack with additional crimes and affirming the original grand jury’s findings as to the remaining counts,” the federal government’s opposition said. “[T]he defendants have now received hundreds of thousands of pages of discovery and learned of the strength of the government’s case; and [] the defendants are mere weeks away from a trial where they each face potentially lengthy periods of incarceration if they are found guilty of the charged offenses.”

Prosecutors also noted that Barrack’s concerns about prejudice at trial are “wholly speculative” and could be “easily addressed” by having Barrack wear clothing that covers the device and managing the entry of jurors entering the courtroom.

The federal government also said that it believed that Judge Cogan would be able to suss out potentially biased jurors.

“These are hardly the first defendants to go to trial bearing monitoring devices, and the Court is well versed in the necessary precautions to ensure no prejudice inures to the defendants,” the government’s Aug. 5 letter opposition said. “No special accommodation is warranted here. Indeed, the Court regularly deals with far more challenging circumstances, such as where a defendant is incarcerated and must be transported to and from the courtroom by U.S. Marshals in a manner that does not alert the jury to the fact of pretrial detention.”

Jury selection is set to being on Sept. 19.

Read the filing, below.