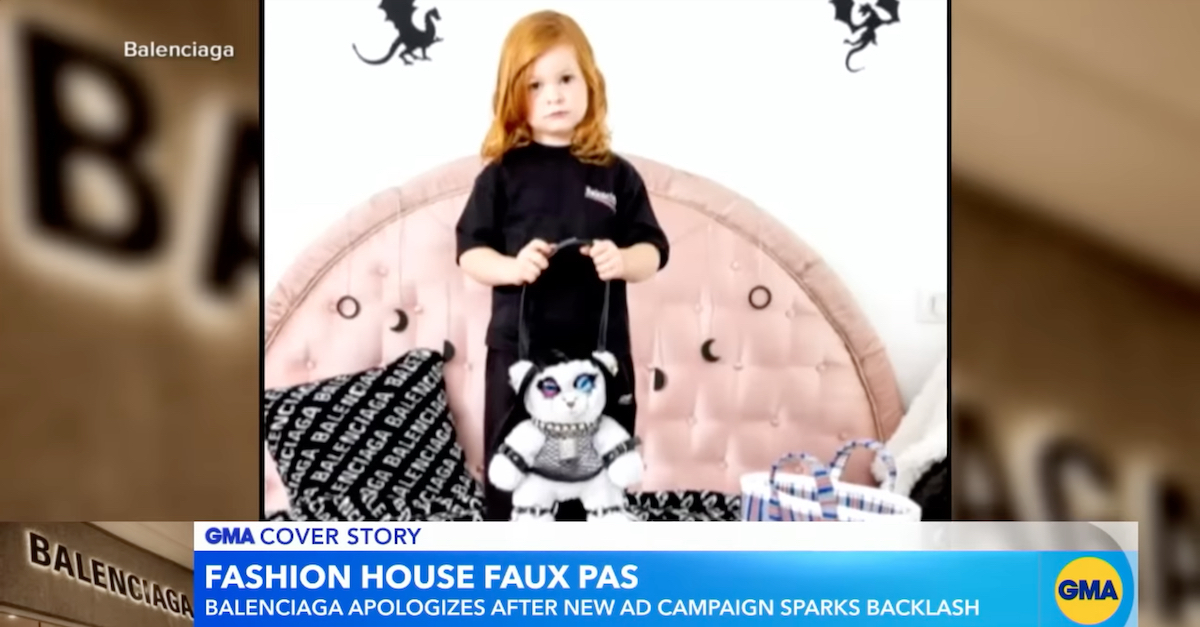 Balenciaga signaled plans to file a $25 million lawsuit over this ad campaign with a child and a BDSM-themed teddy bear. (Image via ABC News/Good Morning America screeengrab.)

A two-page summons with notice does not specifically mention the teddy bears, but it alludes unmistakably to the controversy, calling the producers’ actions “inexplicable,” “malevolent, or at the very least, extraordinarily reckless.”

The document was filed Friday in New York State Supreme Court for the County of New York.  In New York State, the Supreme Court is a trial court of general jurisdiction in a given area; the state’s highest court is the Court of Appeals.  Both the summons and notice — and a concomitant court docket — do not even list a case number because the filing is brand new.

One of the photos from the ad campaign in question appeared to include the 2008 U.S. Supreme Court decision United States v. Williams next to a luxury purse.  Williams concluded that a federal prohibition on the so-called “pandering” — or advertising, promoting, presenting, distributing, or soliciting — of purported child pornography was constitutional.  Federal prosecutors said they wished to use the law to combat virtual child pornography.

“Balenciaga believes that Defendants’ inexplicable acts and omissions were malevolent or, at the very least, extraordinarily reckless,” the summons with notice states. “As a result of Defendants’ misconduct, members of the public, including the news media, have falsely and horrifically associated Balenciaga with the repulsive and deeply disturbing subject of the court decision. Defendants are liable to Balenciaga for all harm resulting from this false association.”

The father of one of the children defended the photos in an anonymous interview with the Daily Mail, saying the photos have been taken “totally out of context.”

“No parent would actively encourage the child to take part in something which was pornographic, and I think the publicity surrounding what happened has been blown out of all proportion,” he said.

Still, the now-scuttled ad campaign has attracted considerable negative attention for Balenciaga, and the company has taken both public and legal steps to distance itself from the campaign.

“We apologize for displaying unsettling documents in our campaign,” the company said in an Instagram post several days before the lawsuit.  “We take this matter very seriously and are taking legal action against the parties responsible for creating the set and including unapproved items for our Spring 23 campaign photoshoot.”

“We strongly condemn abuse of children in any form,” the Instagram post continued.  “We stand for children safety and well-being.”

The two-page notice and summons is available here.

Meghann Cuniff and Aaron Keller contributed to this report.