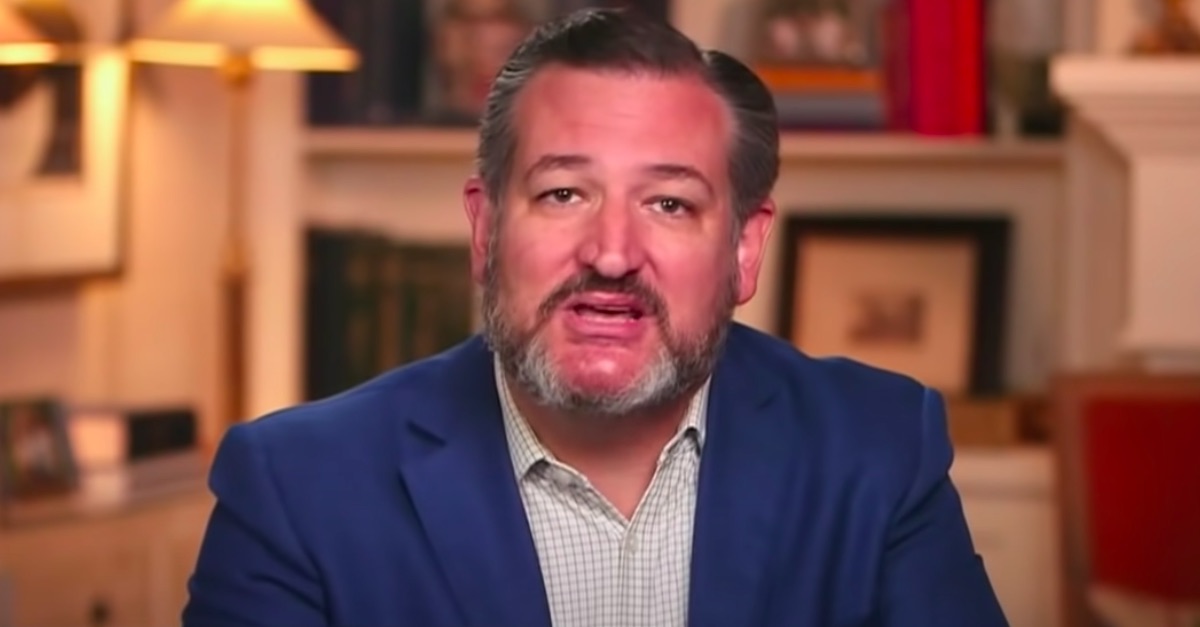 The 65 Project—a collection of lawyers, retired judges, legal experts, and bipartisan political operatives launched earlier this year—filed an ethics complaint against Cruz on Wednesday, asking that the Texas bar investigate the GOP senator for violating “numerous” rules of professional conduct and disciplining him accordingly.

The group’s name is a direct reference to the 65 lawsuits filed in the wake of the election that sought to reverse Joe Biden‘s win. The complaint against Cruz comes a little more than two months after the group’s initial volley in March, when 10 attorneys received similar complaints.

The 65 Project says that by representing Trump in a lawsuit that sought to reverse the election results in Pennsylvania, Cruz “created an attorney-client relationship” with Trump and is therefore subject to the Texas State Bar’s disciplinary measures. The group’s bar complaint also cites Cruz’s promise to litigate Texas’s effort to overturn election results in four other states.

According to the group, Cruz violated multiple state professional conduct rules, including those that prohibit lawyers from bringing or defending frivolous claims, assisting or counseling a client to engage in crime or fraud, and encouraging other lawyers to violate the rules of professional conduct.

In joining the lawsuit over the Pennsylvania results, Kelly vs. Pennsylvania, the complaint says, Cruz knew he was joining a frivolous case. That case had incorporated allegations made in a different case challenging the election, Texas v. Pennsylvania.

“Mr. Cruz acknowledged having read the filings in the Kelly case before agreeing to represent the plaintiffs,” the complaint said, later adding: “As documented in the thorough complaint filed with your office against Attorney General [Ken] Paxton, the assertions made by Texas and Mr. Trump in the Texas v. Pennsylvania litigation lacked any reasonable legal or factual basis.”

The complaint says Cruz pushed the frivolous claim all the way up to the nation’s highest court.

“He ‘called on the [Supreme] Court’ to hear the matter and supported the effort both by lending his law license to the cause and amplifying the allegations in social media and television appearances,” the complaint says, adding that the Supreme Court acknowledged the frivolity of the claims in both cases when it “denied the motions in short orders.”

According to The 65 Project, there is “uncertainty about the end date” of Cruz’s representation of Trump. According to a transcript of the House committee investigating Jan. 6, Trump attorney John Eastman, the legal mind behind the so-called “coup memos” that purported to present a way to keep the former president in office, asserted attorney-client privilege over subpoenaed documents that contain the word “Cruz.”

An attorney-client privilege “would not exist were Mr. Cruz not a member of Mr. Trump’s legal team, the ethics complaint says.

Eastman, it should be noted, is currently under investigation by the California State Bar over his role in the “Big Lie” litigation, and The 65 Project’s ethics complaint says that, too, is an additional reason to investigate Cruz: Texas rules prohibit lawyers from encouraging other lawyers to violate professional conduct rules, but Cruz appears to have done so, since the California rules Eastman allegedly violated are “nearly identical” to those Cruz allegedly violated in Texas.

The complaint also accuses Cruz of violating the rule mandating that a Texas lawyer “shall not knowingly make a false statement of material fact or law to a third person” during in connection with representation of a client.

Cruz, however, did just that, the complaint says, when he made statements “endorsing the allegations contained in Texas’s filing before the United States Supreme Court,” and by repeating the “false claim that the lawsuit presented a ‘pure question of law,'” when the defendants actually disputed many of the facts the plaintiffs had alleged.

“Up to and Including Sanctions and Disbarment”

The complaint also links Cruz directly to the Jan. 6 attack on the U.S. Capitol, describing Cruz’s actions in the Senate chamber as the increasingly violent crowd of Trump supporters closed in on the building.

“As the rioters made their way to the Capitol, Mr. Cruz fulfilled his promise to object to certifying Arizona’s electoral votes,” the complaint says. “The House and Senate then met separately to debate the objection. Mr. Cruz spoke to his colleagues and urged that they delay the electoral vote counting for a ’10-day emergency audit.’ Just as Mr. Cruz finished pushing for the delay that Mr. Trump and Mr. Eastman sought, insurrectionists breached security, vandalized the building, assaulted police officers, and sought to hunt down members of Congress and Mr. Pence.”

Adding insult to injury, the complaint says, was the fact that Cruz appeared to make a cynical ploy for campaign cash as the Capitol was attacked.

“As insurrections attacked the U.S. Capitol, with his colleagues huddled in hiding, Mr. Cruz sent a fundraising message,” the complaint said. That message: “I’m leading the fight to reject electors from key states unless there is an emergency audit of the election results. Will you stand with me?”

The 65 Project called Cruz’s actions “egregious” and says that he must be held accountable.

“It’s egregious enough that Cruz used his Senate perch and Twitter account to support Trump’s lies, but he went beyond that by adding the value of his law license to the malicious effort,” said Michael Teter, Managing Director of The 65 Project, in a press release. “Cruz violated numerous rules while representing Trump, which is why we’re filing this complaint urging the State Bar of Texas to investigate him and impose appropriate sanctions.”

The complaint doesn’t specify what appropriate discipline would look like, but The 65 Project says the consequences should be significant.

“We would be supportive of whatever discipline they deem appropriate but do agree that the importance of this issue, and the blatancy of the conduct, would warrant discipline up to and including sanctions and disbarment,” Eddie Vale, a spokesperson for the group, told Law&Crime.

Cruz, unsurprisingly, signaled that he isn’t taking the allegations seriously.

“The 65 Project is a far-left dark money smear machine run by a who’s who of shameless Democrat hacks,” a spokesperson for Cruz said in a statement emailed to Law&Crime. “They’re not a credible organization and their complaint won’t be worth the paper it’s printed on.”

The 65 Project is reportedly targeting 111 attorneys in 26 states who were involved in the 65 failed lawsuits challenging the results of the 2020 presidential election.

Read the ethics complaint, below: