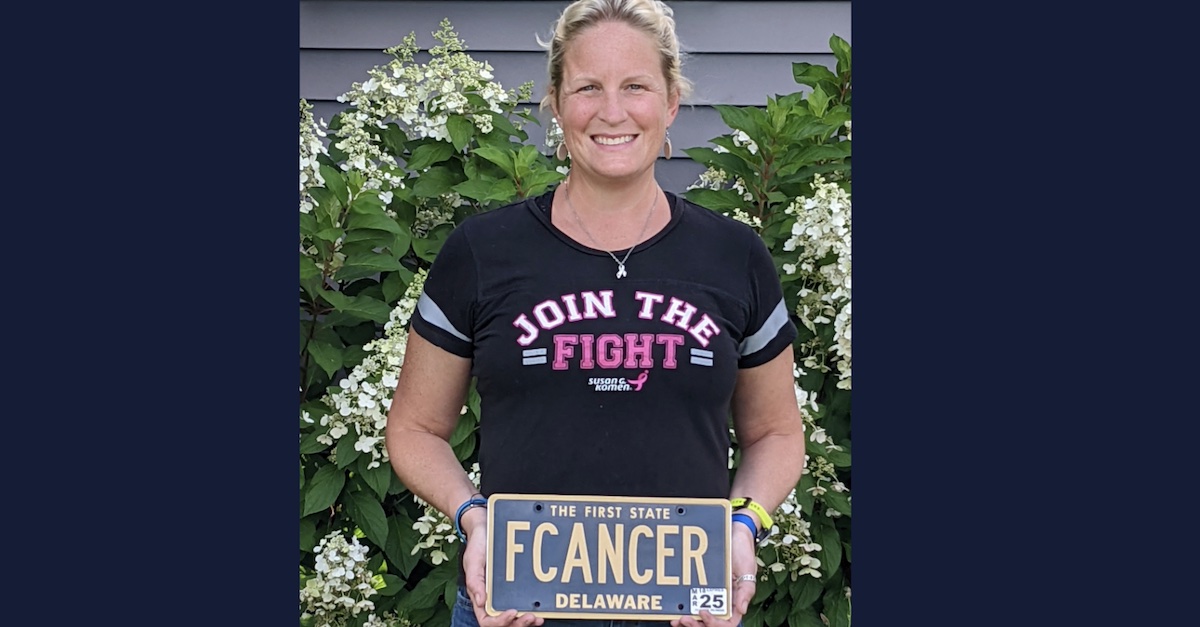 The ACLU announced Monday that it is taking on the case of a Delaware women whose vanity license plate reading “FCANCER” was recalled by the Delaware Department of Motor Vehicles.

Kari Lynn Overington, 41, began a pro se action in federal court in Delaware challenging the Delaware DMV’s decision to disallow her the usage of the plate. Initially, the DMV granted Overington the “FCANCER” license plate; six months later, though, Overington received notice that the plate had been recalled because it “does not represent the division and the state in a positive manner.”

“As a cancer survivor, the fight to end cancer is extremely personal to me,” Overington said in a statement, adding: “I was shocked when the DMV recalled my license plate because fighting cancer in our communities is imperative, and a message I assumed everyone would embrace.”

The Delaware DMV officials moved to dismiss the case, but U.S. District Judge Richard G. Andrews, a Barack Obama appointee, refused to throw out the case. In the court’s decision siding with Overington, the judge said the case presented a “significant constitutional issue.” Andrews noted in his decision that Overington “intelligently presented her case this far” despite her not being an attorney.

Given the specifics of the case, Overington was not entitled to court-appointed counsel to represent her — a reality that could be a serious factor in how far Overington would be able to pursue this potentially complex First Amendment case on her own.  Judge Andrews mentioned in his order, however, that he planned to inquire with the Clerk’s office to see whether he could arrange for an amicus curiae to obtain counsel, thus providing the plaintiff with a possibility for litigating the First Amendment issues without the need to hire private counsel.

Now, with representation provided by the ACLU, Overington’s case will proceed with the full weight of dedicated legal counsel thrown behind her claim. It is unclear at this stage whether any amicus curiae might still become involved in the litigation.

Overington’s lawsuit raises constitutional questions, such as whether a vanity license plate constitutes government or individual speech, and whether Delaware is entitled to full free speech rights including the right to disallow certain plates. But if a vanity plate is deemed individual speech, the court would then need to assess whether “FCANCER” is protected — an analysis that would require a determination as to whether the plate is profane or obscene.

“Delaware permits its citizens to express themselves through vanity license plates,” said ACLU of Delaware Legal Director Dwayne J. Bensing. “This case underscores the problems in the Delaware DMV’s current review process, which is subjective and has now led to censorship of protected speech.”