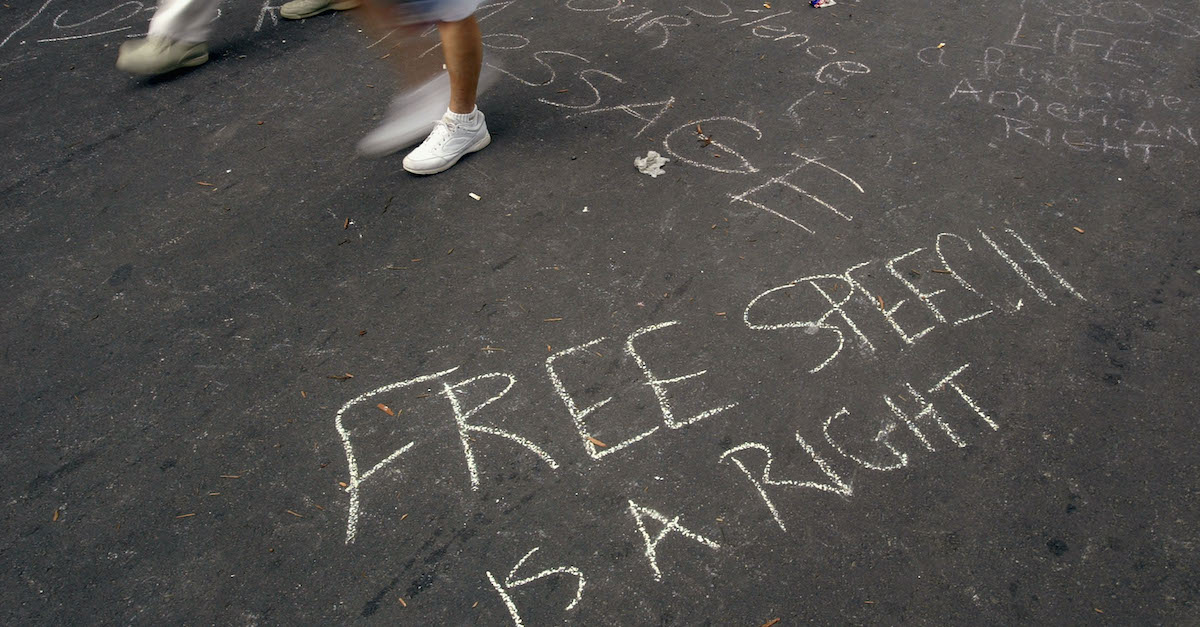 Pedestrians walk over chalk drawn political statements outside of the fenced off free speech zone on the second day of the Democratic National Convention July 27, 2004 in Boston, Massachusetts.

Finding that Supreme Court precedent tied their hands, a federal appeals court unanimously upheld New Hampshire’s criminal defamation law. One member of the three-judge panel, however, warned that such rarely deployed statutes “cannot be reconciled with our democratic ideals of robust debate and uninhibited free speech.”

“Ours is a country that touts a ‘profound national commitment to the principle that debate on public issues should be uninhibited, robust, and wide-open,'” U.S. Circuit Judge O. Rogeriee Thompson wrote in a concurring opinion. “That commitment may well be profound; but it is not the whole story.”

Tuesday’s ruling falls four years after the American Civil Liberties Union of New Hampshire filed a lawsuit on behalf of Robert Frese, an Exeter resident who was arrested and charged twice under the state’s criminal defamation law.

Frese had posted comments on an article about a retiring police officer, whom he accused of misconduct. He also claimed that Exeter Police Chief William Shupe “covered up for this dirty cop.” Those remarks sparked the first criminal complaint against Frese, though the charges against him were later dropped.

The ACLU of New Hampshire’s lawsuit attacked the constitutionality of the law, and the civil rights group noted that such laws remain on the books in 25 states and the U.S. Virgin Islands.

Punishing defamation as a class B misdemeanor, New Hampshire’s statute does not carry the possibility of imprisonment for its violation, but it does carry a possible $1,200 fine.

The three-judge panel found that the Supreme Court blessed the constitutionality of that statute and others like it in Garrison v. Louisiana in 1964.

“Mindful of the Supreme Court’s guidance that ‘the knowingly false statement and the false statement made with reckless disregard of the truth, do not enjoy constitutional protection[,]’ we conclude that Frese’s allegations fall short of asserting viable constitutional claims,” U.S. Circuit Judge Jeffrey Howard, a George W. Bush appointee, wrote on behalf of the panel, quoting the Garrison precedent.

In that passage, the First Circuit and Supreme Court cited the actual malice standard established in New York Times v. Sullivan, which raised the bar for proving defamation claims. The Garrison court found that this high bar applied, even though it upheld criminal defamation laws.

Authoritarian regimes commonly use criminal defamation laws to stifle dissent, but the existence of such laws in broad swaths of the United States largely goes unnoticed because, for the most part, the most of those statutes have gone long dormant.

In his concurring opinion, Judge Thompson remarked about the curious silence regarding criminal defamation laws in the land of the First Amendment.

“The troubling seditious-criminal-libel historical context that underpins a law like this one is well known to First Amendment scholars, advocates, and jurists — and perhaps most deeply felt by those who’ve had brushes with it,” Thompson wrote. “I will not explicate the ins and outs of that history here — and there is a great deal of important history to digest. For today’s purposes, it suffices to say these laws have their genesis in undemocratic systems that criminalized any speech criticizing public officials. True, that is not today’s American system per se. But like it or not, that is where our system’s roots lie, and even in view of the rightly heightened standards we deploy when reviewing laws that restrict speech, […] it is remarkable that we are still confronting laws criminalizing speech at all.” [citations omitted]

Thompson attributed part of that silence to the public’s general “unawareness or ambivalence” about them.

“It’s possible many believe criminal defamation is basically off the books; Garrison can be read to have been aimed at accomplishing as much, at least from a federal standpoint, in that it nixed as unconstitutional civil and criminal penalties for truthful statements about public officials, leaving room to sanction only those statements made with actual malice (knowledge of falsity or reckless disregard for the truth),” the concurring opinion continues.

The judge called it “remarkable” that, “given the current political climate in this country, with ‘truth’ at a premium,” the laws largely go unnoticed.

“It seems to me that if these laws were robustly enforced, dockets in these states would be positively teeming with prosecutions,” Thompson wrote. “That’s not what happens.”

Noting that the existence of the laws serves to “chill and deter speech,” Thompson said: “This brings me back to the reality that criminal defamation laws are all too easily wielded as a silencing threat of punishment for speech.”

Frese’s lawyer Brian Hauss from the ACLU did not immediately respond to an email requesting comment.