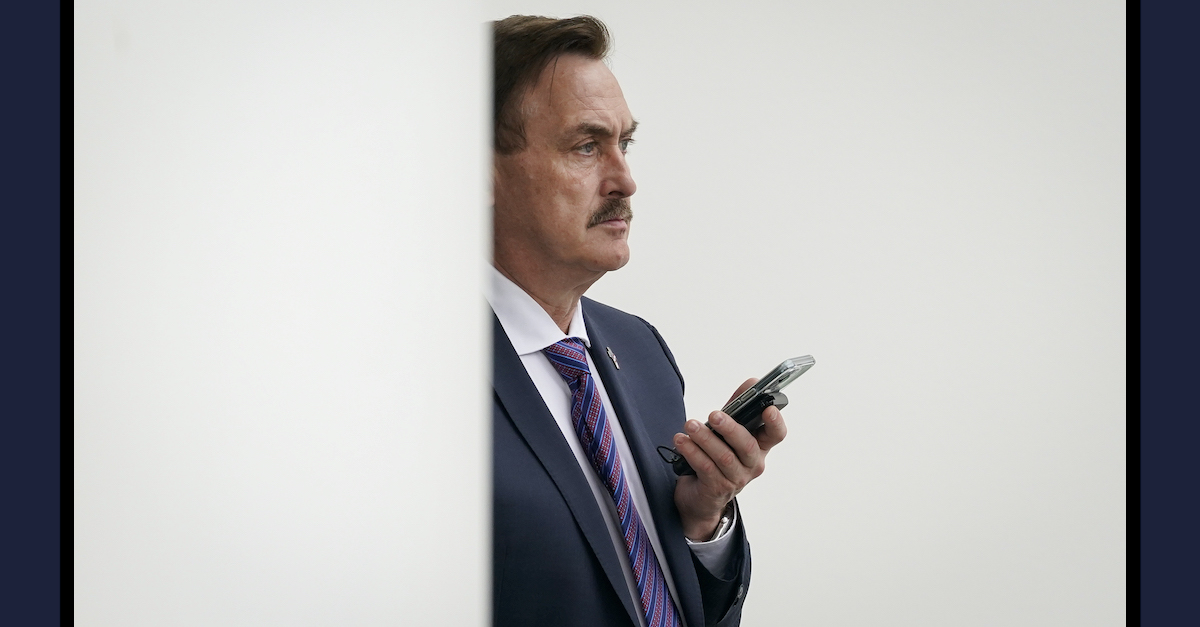 MyPillow CEO Mike Lindell waits outside the West Wing of the White House before entering on Jan. 15, 2021. (Photo by Drew Angerer/Getty Images.)

A federal magistrate judge in Minnesota on Wednesday ordered the U.S. Department of Justice to file a swift reply to Mike Lindell’s demand for an “expedited” review of a request for copies of search warrant materials the government used to justify seizing Lindell’s cell phone.

According to the court docket, Magistrate Judge Elizabeth Cowan Wright told the DOJ to respond to Lindell’s request for an expedited review by 9 a.m. on Thursday. The reply will reveal how quickly the DOJ wishes to move forward on the matter, but it will likely not directly or immediately resolve the question of whether or not Lindell will immediately obtain copies of the paperwork in question.

The order for a DOJ response is limited to the issue of the speed of the timeline at play. Still, it came after Lindell’s attorneys filed a collection of court papers which together seek access to the documents and in an expedited fashion — namely, a copy of the affidavit the FBI used to secure the search warrant.

The affidavit should explain in particularity the probable cause developed by federal authorities to convince a magistrate to sign off on the warrant.

FBI agents seized Lindell’s phone while the Donald Trump supporter and MyPillow CEO was in a Hardee’s fast food drive-thru lane in Mankato, Minnesota, on Sept. 13, 2022. Lindell was returning from a hunting trip with a friend when the government seized his phone, which is actually a company-issued device, according to court papers. MyPillow is also a plaintiff in the case.

A purported copy the search warrant used to seize Lindell’s phone has already been filed in court by Lindell’s attorneys. However, the DOJ said during a recent telephone conference with U.S. District Judge Eric C. Tostrud that it would not concede that the document filed by Lindell was a “true and correct” copy of the actual warrant.

If the document is authentic, it suggests that the government is investigating whether Lindell’s phone contains evidence of identity theft, intentional damage to a protected computer, or conspiracy to commit either of those crimes in connection with efforts to examine voting systems used during the 2020 election.

Tina Peters, Conan James Hayes, Belinda Knisley, Sandra Brown, Sherronna Bishop, Douglas Frank, and Lindell himself are named in Lindell’s purported copy of the warrant as “subjects” of the government’s probe. All of those named individuals have in various forms and venues either complained about or denied the outcome of the 2020 election. Peters, Knisley, and Brown are already tied up in election-related cases in Colorado. Bishop is reportedly U.S. Rep. Lauren Boebert’s (R-Colo. 3) former campaign manager. Frank is reportedly a Lindell associate. Hayes is reportedly a surfer who developed a line of athletic clothing — a business he subsequently sold — and who now claims the election that installed Joe Biden was botched.

Subjects of government probes are not necessarily the targets of government probes. Subjects are people wrapped up in an investigation’s orbit; the DOJ’s justice manual describes subjects as individuals “whose conduct is within the scope of the grand jury’s investigation.” Targets, however, are “putative” defendants. The purported copy of the warrant filed by Lindell’s attorneys does not name any specific targets.

Citing case law in the District of Minnesota, Lindell’s attorneys on Tuesday asserted they have “a right under the warrant clause of the Fourth Amendment to inspect and copy the affidavit upon which the warrant was issued.”

“Plaintiffs have requested to exercise their right to inspect and copy the affidavit upon which the warrant was issued, as evidence to support their showing that the Warrant was improperly obtained and executed,” Lindell’s attorneys argued. “The Government has rejected this request. Plaintiffs now move this Court to order the release to Plaintiffs of the materials submitted to obtain the Warrant at issue in this matter.”

Lindell’s attorneys have for weeks complained that that seizure of the phone violated Lindell’s various constitutional rights:

Mr. Lindell’s First Amendment right of free association makes it urgent that his confidential communications in association with other citizens not be intruded upon by the Government, that the ongoing violation of his rights be remedied immediately, and that his exclusive possession of the phone and the information stored upon it be immediately restored – all of which supports immediate review of the materials submitted to the Court in support of the Warrant application.

Attached to the various Lindell filings are four news reports that detail government investigations involving Peters (the Colorado county clerk who is embroiled in 2020 election-related proceedings in her home state), Hayes, Knisley, Brown, and Bishop. Lindell’s attorneys have argued that releasing the warrant affidavit will not prejudice the government’s apparently ongoing investigations into those individuals because the probes are already public knowledge. In short, Lindell’s attorneys argued that the investigations are not secret; therefore, they say releasing more information about them will not cause a problem.

The smattering of filings by Lindell’s attorneys is below:

[Editor’s note: this piece has been corrected since its initial publication. The DOJ’s reply was due at 9:00 a.m. on Thurs., Oct. 6, not on Wednesday as was accidentally and erroneously reported. The judge issued the order on Wednesday for a Thursday reply deadline.]