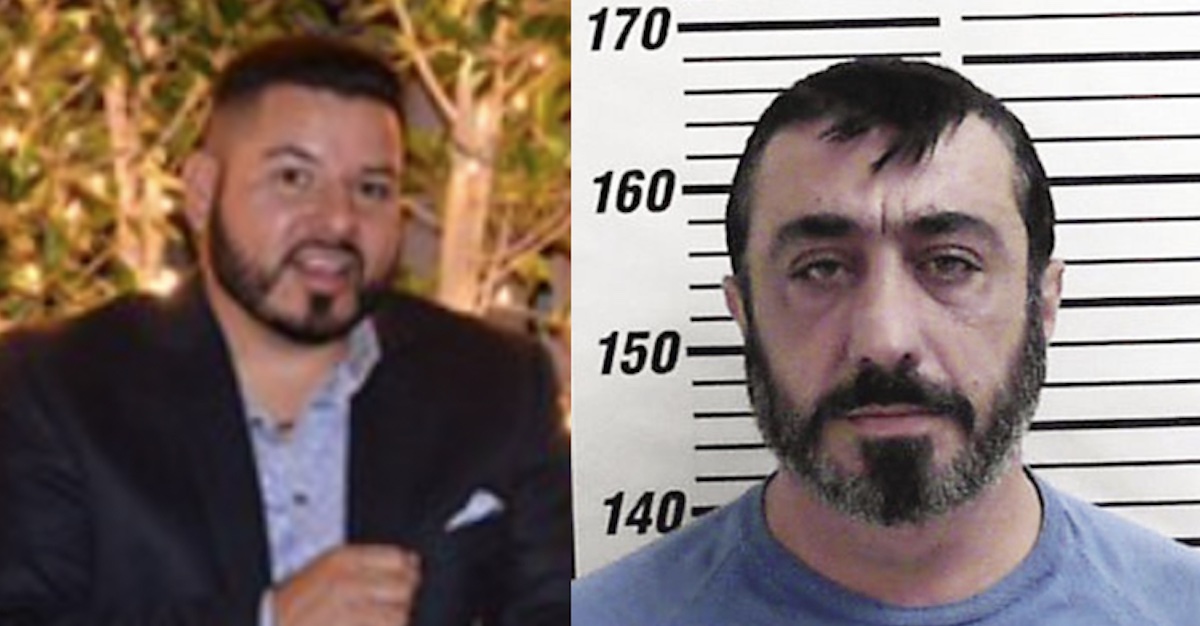 A former Homeland Security Investigations agent who prosecutors say was “cut-off financially” by the crime boss he’d been helping has been sentenced to spend about 10 years in federal prison for a bribery scheme with a corrupt lawyer.

Felix J. Cisneros, 48, avoided the additional two years in prison requested by prosecutors, with U.S. District Judge R. Gary Klausner imposing 121 months instead of the 145 months they wanted. A jury in May convicted Cisneros of 30 felonies, including of conspiring to bribe himself as a public official, and he’s currently in custody in Los Angeles.

A U.S. Attorney’s Office sentencing memorandum said the roughly 12-year recommended sentence, which was at the upper-end of the U.S. Sentencing Commission guidelines, was warranted because of Cisneros’ “long-term association with Levon Termendzhyan and his family.”

“Rather than build upon this strong family foundation and excellent work ethic, defendant turned to a life of crime in a manner that violates the public trust in law enforcement,” according to the 11-page memo.

Still, the judge didn’t go nearly as lenient as Mgdesyan’s 41-month recommendation, imposing a 10-year, one-month sentence that consists consists of 85 months for conspiracy to bribe a public official, 121 months for bribery of a public official and 27 counts of money laundering, and 36 months for two counts of false tax returns, all to be served concurrently.

The sentencing follows Klausner rejecting a new trial request Mgdesyan filed over a new revelation that a key witness in Cisneros trial, Edgar Sargasyan, fraudulently obtained by California State Bar law license by paying someone to take the examination for him. Sargasyan told federal agents about it shortly before trial was to begin for Broumand, a longtime FBI agent and close associate of Termendzhyan who was convicted in October of helping Sargsyan access confidential law information. The cheating wasn’t yet known when he testified against Cisneros, but Klausner rejected Mgdesyan’s argument that it was so unfair as to warrant a new trial for Cisneros.

“The jury already knew that E.S. [Sargasyan] is a criminal who used deception and bribery to accomplish his aims,” Klausner wrote in an Oct. 18 order.

Ex-@HSI_HQ agent Felix Cisneros Jr.’s lawyer also filed publicly a copy of the handwritten notes @USAO_LosAngeles gave him, along with the letter. As they say, the lawyer (whose license is suspended over felony convictions) just recently told them of this epic cheating scheme. pic.twitter.com/w1eM3i3zIp

Cisneros was first charged criminally in 2017, eventually pleading guilty to a conspiracy to assist a foreign felon into the United States as well as falsification of records and making a false statement. It related to Cisneros’ relationship with Termendzhyan, and the felon he was helping into the country using his federal credentials was an associate of Termendzhyan, a Los Angeles biodiesel businessman described by by the U.S. Department of Justice as an Armenian organized crime boss.

The career-ending case sent Cisneros to prison for a year and day, but as prosecutors explained in their memo, it didn’t steer him from Termendzhyan.

After he left prison, Cisneros took a job with an energy company owned by Termendzhyan’s brother that shares an address in the city of Commerce, near Los Angeles, with Termendzhyan’s Noil Energy Group Inc., which was at the center of his fraud scheme, along with Washakie Renewable Energy and its chief executive officer, Jacob Kingston, and his brother, Isaiah Kingston, its chief financial officer. Both have pleaded guilty in the same fraud case in which a jury convicted Termendzhyan. 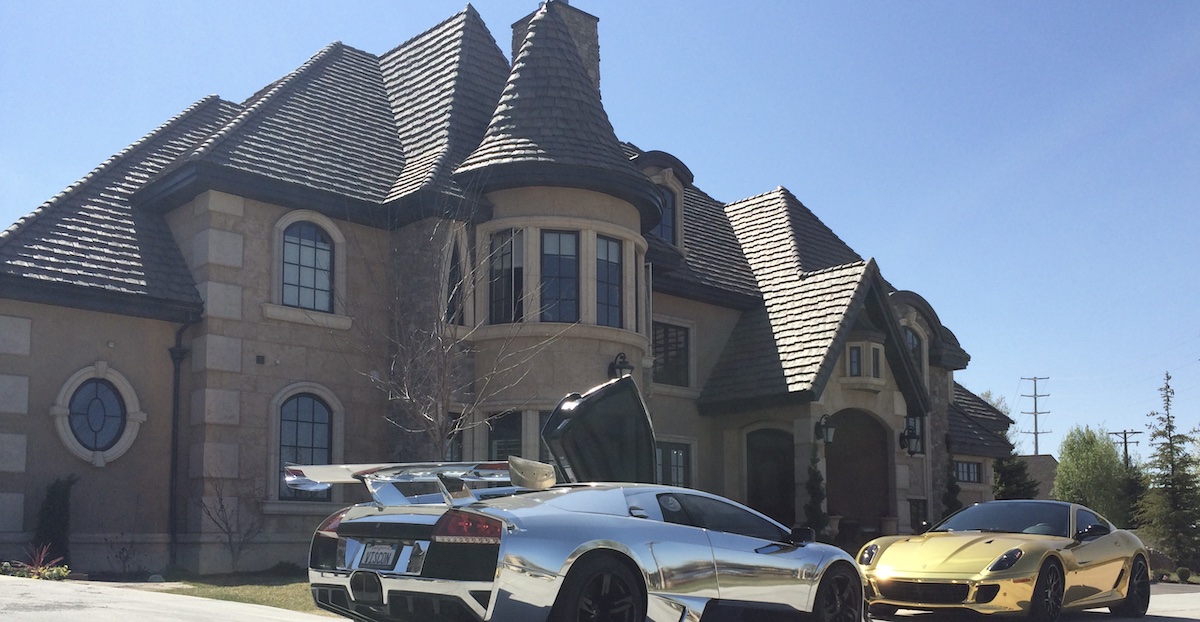 A U.S. Attorney’s Office evidentiary photo of Jacob Kingston’s home at 2072 E. Creek Road in Cottonwood Heights, Utah, with a Bugatti and a Ferrari parked out front. Prosecutors in a March 2020 press release said Kingston used some of his fraud proceeds to buy Lev Dermen “a 2010 Bugatti Veyron, and they exchanged gifts including a chrome Lamborghini and a gold Ferrari.”

Cisneros’ relationship with Termendzhyan is complicated, court documents show. Prosecutors say he was “pushed away and cut-off financially by Termendzhyan” when he sought money from Sargasyan in fall 2015.

Cisneros “was living far beyond his means and had thousands of dollars of credit card bills every month,” according to the memo from assistant U.S. attorneys Ruth C. Pinkel, Michael J. Morse and Juan M. Rodriguez.

Sargasyan didn’t disappoint him: Prosecutors say he “richly rewarded” the federal agent “with at least $40,000 in cash and over $93,000 in payments directly to credit card companies, mortgage companies, the federal Thrift Savings plan (to re-pay defendant’s TSP loan), and to defendant’s wife.”

But Cisneros’ ties to Termendzhyan weren’t severed, as prosecutors say is evidenced through his post-prison job with Termendzhyan’s brother’s company. Sargsyan also had close ties to Termendzhyan, and he was using both Cisneros and Broumand to try to fend off law enforcement investigations.

Another law enforcement officer connected to the corruption, John Saro Balian, a former police officer in the Los Angeles County suburb of Glendale, was sentenced in 2019 to 18 months in prison after pleading guilty to bribery, obstruction and false statements charges related to inside information he provided to the Mexican Mafia and his lies to federal agents about his relations to the Mafia as well as organized crime connected to the Armenian Mafia.

Sargasyan testified in Cisneros’ trial that Balian, Cisneros and Broumand flew to Las Vegas on his private jet in 2016 and he “paid for everybody” because they “were law enforcement people,” according to the court documents. Further, Sargasyan testified that Balian, Ciseneros and Broumand joined him at the Grand Havana Room, a members-only cigar lounge in Beverly Hills, in May 2016 to celebrate his passing of the California bar exam.

That’s the exam Sargasyan later told federal agents he’d paid someone to take for him. His law license already was suspended after he pleaded guilty in July 2020 to five federal felonies. He is not in custody and has not been sentenced.