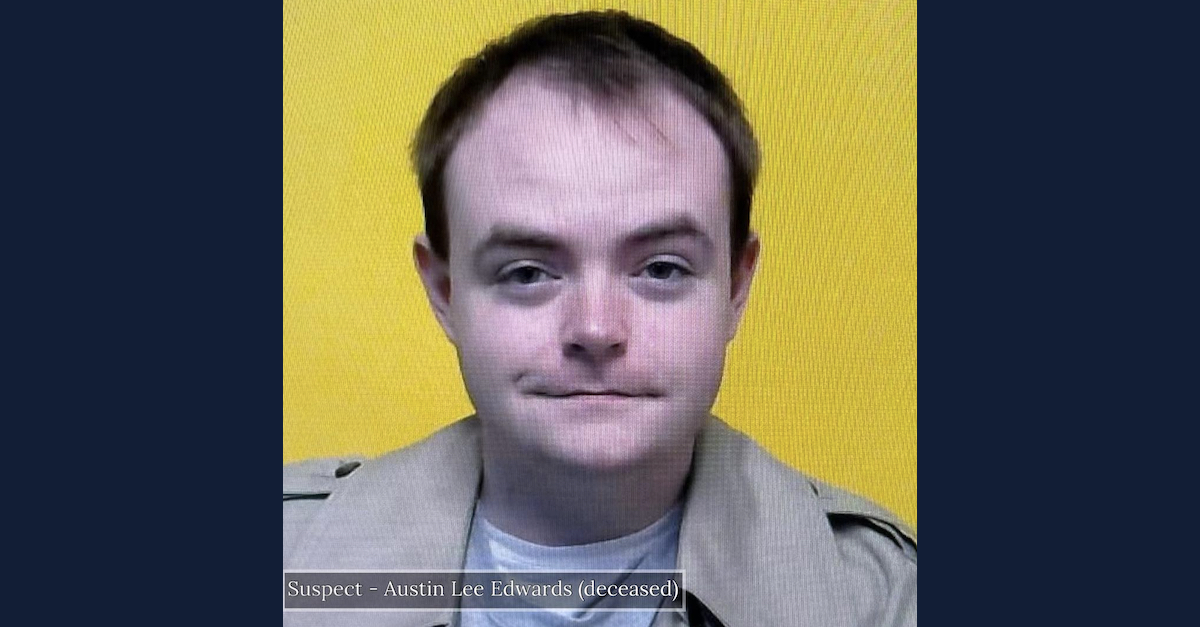 A member of law enforcement from Virginia died in a shootout with law enforcement in California after a suspected cross-country catfishing effort to sexually exploit a teenager left three of the girl’s family members dead.

Austin Lee Edwards, 28, was shot and killed on the day after Thanksgiving – after he allegedly committed three murders in Riverside County.

According to the Riverside Police Department, law enforcement received a call about a teenage girl who “appeared distressed” as she was being led into a Red Kia Soul with an older man.

As officers with the RPD responded to that initial call, dispatch radioed to note that there was a “structure fire just a few houses away from where” the original welfare check call had originated.

“The Riverside Fire Department arrived first and reported a working fire on the first floor of the residence,” police said in a press release. “They initiated a fire attack, made entry, then discovered three adult victims laying on the ground in the front entry way.  Their bodies were pulled outside where it was determined they were victims of an apparent homicide.”

The victims were later identified as 69-year-old Mark Winek, his wife, 65-year-old Sharie Winek, and the couple’s daughter, 38-year-old Brooke Winek. Police believe the house fire was started intentionally. The resulting investigation determined the teenager lived with the three victims – her mother, grandfather, and grandmother.

A GoFundMe remembers the victims fondly:

Over the Thanksgiving weekend, Mark, Sharie, and Brooke Winek lost their lives in a horrific triple homicide. Mark Winek was a loving Father, Grandfather, Uncle, Brother, and Coach at Arlington High School. Sharie Winek was a sweet and caring Mother, Grandmother, Sister, and Aunt who cherished spending time with her family. Brooke Winek was a beloved single mother with the biggest heart and found her most immense joy in following her daughter in the Color Guard at Arlington High School. The proceeds from this GoFundMe will help cover the ongoing support of the two teenage daughters, who lost their mother and need future care. Thank you for your contributions during this sorrowful time. Mark, Sharie, and Brooke will truly be missed.

The red Kia Soul was soon on the radar across the Golden State. As law enforcement in Riverside attempted to secure warrants for his arrest and ascertain his exact location, the suspect eventually made his way north into immediately adjacent San Bernardino County.

There, the suspect died in a ghost town.

“Several hours later, he was discovered driving with the teen through San Bernardino County when he was located by the San Bernardino County Sheriff’s Department in the unincorporated area of Kelso,” Riverside police said in their Nov. 27, 2022 press release. “Edwards fired gunshots at deputies and a deputy-involved shooting occurred where he was subsequently pronounced deceased at the scene.”

According to the San Bernardino County Sheriff’s Department, Edwards’ vehicle was identified by aircraft at around 1:15 p.m. that day. Much later, the SWAT team reportedly attempted to intercept the vehicle, resulting in the gun battle.

“As SWAT intercepted Edward’s vehicle, Edwards fled and led deputies on a pursuit,” the SBSD said in a press release. “During the pursuit, Edwards fired at the deputies. The volley of gunfire struck the SWAT vehicle numerous times. Edwards lost control of his vehicle and the pursuit ended when he drove off the road. The female victim exited the vehicle and was rescued by deputies. Edwards exited the vehicle and pointed a gun at the Sheriff’s helicopter and deputies fired at Edwards. Upon contact, Edwards was unresponsive and pronounced deceased at the scene.”

Riverside police said their investigation determined Edwards met the girl “through the common form of online deception known as ‘catfishing,’ where someone pretends to be a different person than they actually are.” After driving from Virginia to California, he is believed to have parked at a neighbor’s house, murdered the girl’s family and then kidnapped her.

“We had a grandmother, grandfather and a mother of this teen murdered by this suspect who traveled from across the country for, most likely, the sexual exploitation of this teenager,” RPD Officer Ryan Railsback during a recent interview with Los Angeles ABC flagship KABC.

Edwards became a Virginia state trooper in January 2022 before resigning in October of this year. He was employed by the Washington County Sheriff’s Office as a deputy and awaiting his assignment when the horrific series of events unfolded.

“Past employers and the Virginia State Police were contacted during the hiring processing; however, no employers disclosed any troubles, reprimands, or internal investigations pertaining to Edwards,” the WCSO said in a statement released to media on Monday morning. “This agency is currently assisting the Riverside Police Department in California with this investigation.”

“It is shocking and sad to the entire law enforcement community that such an evil and wicked person could infiltrate law enforcement while concealing his true identity as a computer predator and murderer,” Washington County Sheriff Blake Andis added. “Our thoughts and prayers are with the Winek family, their friends, officers, and all of those affected by this heinous crime.”