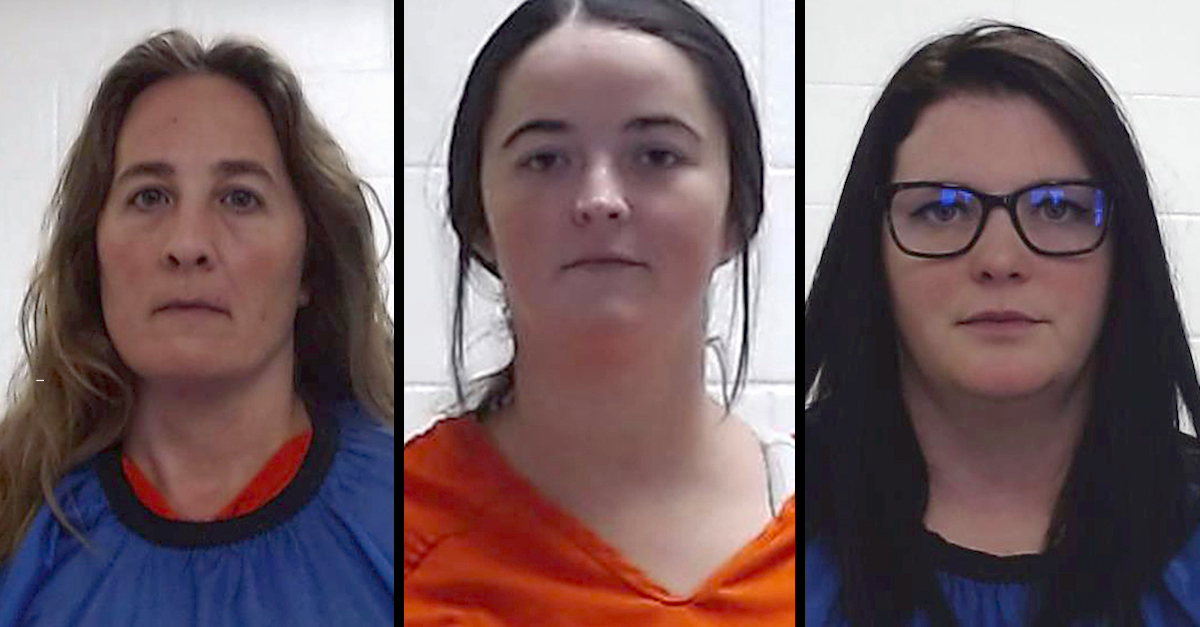 A 47-year-old teacher in Texas and her two assistants were arrested for allegedly punishing a 5-year-old boy with special needs by placing him in an isolation room where he fell and hurt himself.  A series of indictments reportedly say the trio failed to seek care for the child after he fell.  They also say the three defendants at some point deprived the child of food and that the child drank his own urine and ate his own feces.

Teacher Melody Michel LaPointe, 47, and teaching assistants Tarah Michelle Tinney, 33, and Augusta Danielle Costlow, 27, were taken into custody on several dates in mid-November and charged with four counts each of abandoning or endangering a child in imminent danger of bodily injury, a second-degree felony, court documents reviewed by Law&Crime show.

The women were all employed by the Liberty Independent School District (ISD) at the time of the alleged crime.

A Liberty County grand jury returned a True Bill of Indictment against the trio on Nov. 16. According to the indictment, Lapointe, Tinney, and Costlow on April 15, 2021 were responsible for the care and control of the victim — identified in court documents as “R.W.” — when they did “intentionally abandon [R.W.] in a place under circumstances that exposed [R.W.] to an unreasonable risk of harm, and under circumstances that a reasonable person would believe would place the child in imminent danger of death, bodily injury, or physical or mental impairment.”

The document explains that the alleged conduct involved confining R.W. “to an isolation room where he fell causing bodily injury” and then failing to “voluntarily deliver the child to a designated emergency infant care provider” as required by law.

In addition to the physical injuries alleged in the indictment, authorities further claimed that R.W. ingested his own feces and drank his own urine, according to reports from Houston ABC affiliate KTRK and from The Baytown Sun, a local newspaper.

The precise timeline of events is not immediately clear in either of the reports.

A spokesperson for Liberty ISD released the following statement on the matter to KTRK:

The teachers were reportedly placed on administrative leave while the district conducted an internal investigation into their conduct. All three reportedly resigned at the completion of that investigation. LaPointe then reportedly found employment as a teacher at Bonnie P. Hopper Primary School in Highlands, Texas.

On Nov. 17, one day after LaPointe was arrested, administrators at Bonnie P. Hopper Primary School sent students’ parents an email notifying them of the situation.

“In an effort of full transparency, we want to inform our families of an incident that occurred yesterday during dismissal. A teacher at Bonnie P. Hopper Primary School was arrested yesterday by Liberty County constables. The cause for arrest occurred in Liberty County and is not affiliated with Goose Creek CISD in any way,” the email reportedly stated. “The teacher is currently placed on administrative leave with pay, pending the outcome of an investigation, after which the District will take appropriate disciplinary action. As this is a pending legal matter, Goose Creek CISD will allow the legal process to proceed and refrain from further comment.We want to ensure our families that the safety and security of your children is our #1 concern. We thank you for your continuous support of our campus and our district.”

Liberty ISD and Goose Creek CISD did not immediately respond to messages from Law&Crime seeking additional details on the matter.

The three defendants are all out on bond, according to jail records.