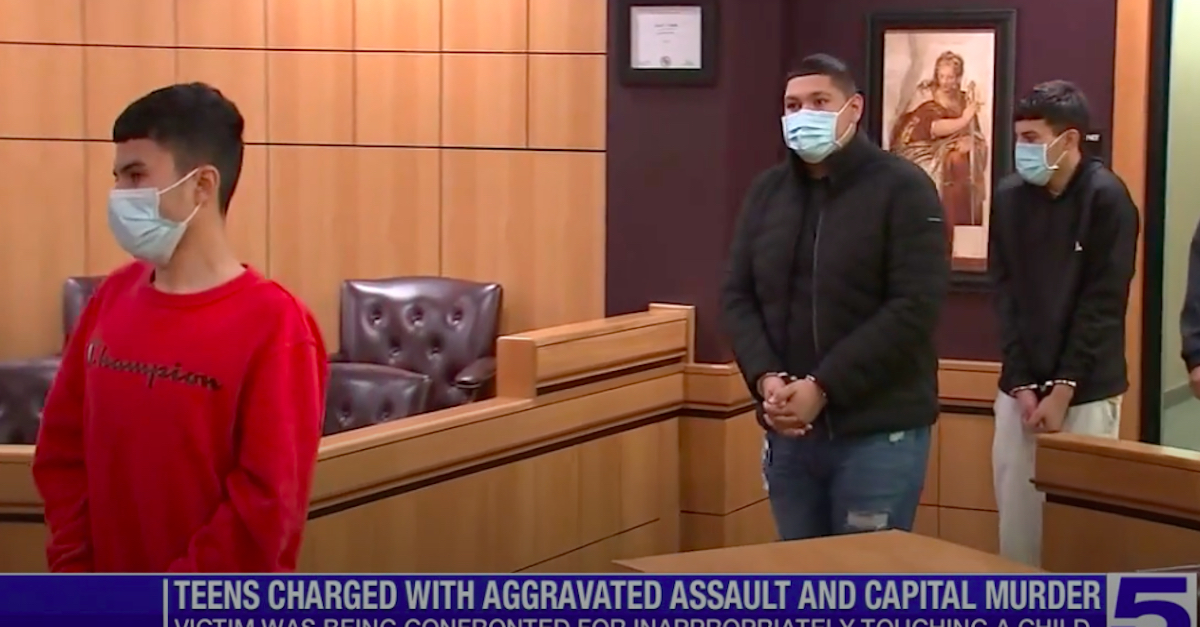 Two teenage brothers in Texas are behind bars after police say they brutally beat their stepfather and left him in a field to die after the man’s 9-year-old daughter accused him of sexual assault. Alexandro and Christian Trevino, ages 18 and 17, were taken into custody along with 18-year-old Juan Eduardo Melendez for allegedly killing 42-year-old Gabriel Quintanilla, Weslaco ABC affiliate KRGV reported.

According to the report, officers with the Pharr Police Department responded to a 911 call on Thursday at approximately 2:41 p.m. The caller was reportedly a farmer who told the dispatcher that he’d discovered the body of a deceased male in one of his fields. Investigators responding to the scene identified the victim as Quintanilla, who had a warrant out for continuous sexual abuse of a child and assault, according to a report from McAllen, Texas newspaper The Monitor.

Per The Monitor, Alexandro and Christian have the same father but different mothers. Both are half-siblings of the alleged 9-year-old victim.

In a press release, Pharr police said that Quintanilla’s death was the result of a “family situation.” Per the release, Quintanilla’s 9-year-old daughter, whose name was not released, caused an “outcry” after alleging that Quintanilla inappropriately touched her at an RV park located in the 1200 block of East Moore, about 15 minutes east of McAllen. The girl allegedly told Alexandro and Christian about the alleged inappropriate touching.

“When brothers Alexandro and Christian Trevino found out, they became enraged and confronted Gabriel Quintanilla at the residence. A physical fight ensued between the three and the victim Quintanilla left the location on foot,” the press release stated.

Police said Christian then chased Quintanilla down on foot in front of an apartment complex up the street where a second assault took place.

“A second assault occurs there when Alexandro Trevino and a driver of a red Dodge Charger, Juan Eduardo Melendez, catch up and join the assault towards the victim,” police said.

Christian, Alexandro, and Melendez allegedly left the scene of the second assault in Melendez’s car. The three then changed vehicles and drove back to the scene in a Ford F-150 pickup truck where they found an injured Quintanilla walking on Veterans Road, where they allegedly assaulted him for a third and final time..

“A third assault occurs and the victim is severely beaten. The victim who is still alive is placed in the bed of the truck and drove off and ended up in the McColl and Whalen Road area where the victim was dropped off in an open field and the suspects fled,” police said.

Investigators reportedly believe that the suspects used brass knuckles to repeatedly punch Quintanilla in the face, resulting in severe head trauma that ultimately led to his death. However, police noted that they believe Quintanilla was still alive when the suspects allegedly left him in the field in McAllen.

All three teens were arraigned Sunday. Christian and Melendez face one count each of capital murder, aggravated assault/family violence, and engaging in organized criminal activity.

Alexandro, who authorities said is not accused of inflicting the fatal blows to Quintanilla, was charged with aggravated assault and engaging in organized criminal activity.