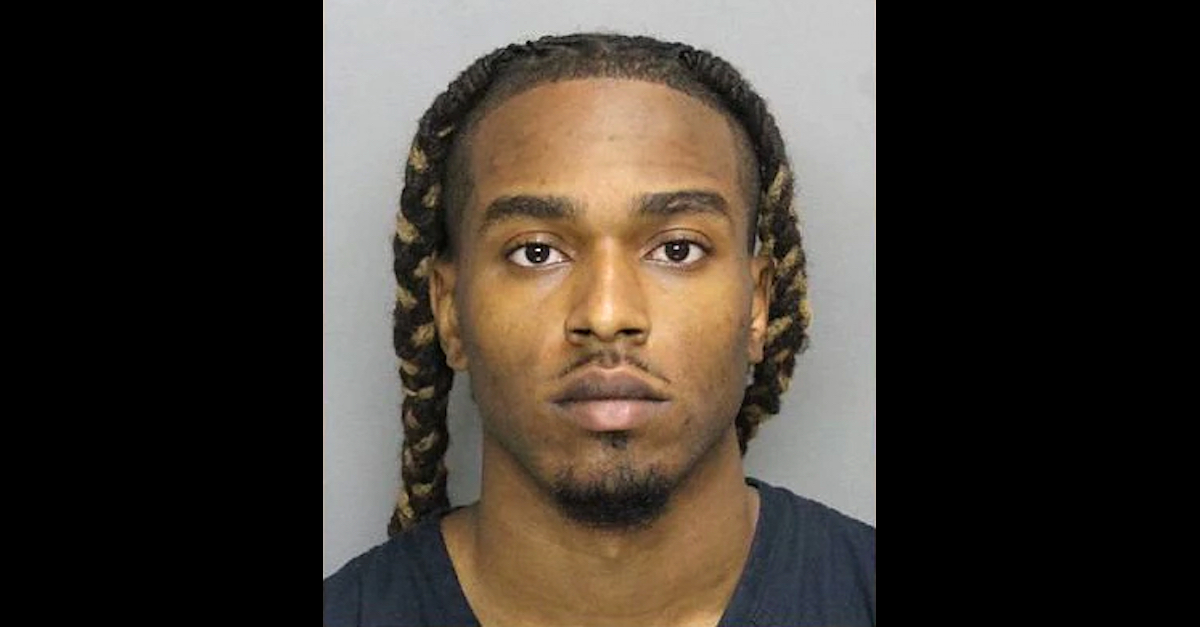 County authorities in Georgia, along with the U.S. Marshals Service and the Chamblee, Ga. Police Department, have arrested a man in connection with the shooting deaths of three people whose bodies were discovered on an Atlanta-area golf course over the Fourth of July holiday weekend.

Bryan Anthony Rhoden was arrested at about 5:30 p.m., the Cobb County Sheriff’s Office said in a tweet. He was asked to report to the Chamblee Police Department on other charges, Atlanta FOX affiliate WAGA-TV reported, and was taken into custody in connection with the golf course killings.  However, the Atlanta Journal-Constitution reported that Rhoden “did not turn himself in” — though he was described as “unarmed and arrested without incident.”

Chamblee is about twenty minutes north of downtown Atlanta.

Chief Tim Cox of the Cobb County Police Department said in a Thursday evening news conference that Rhoden was being charged with three counts of murder, three counts of aggravated assault, and two counts of kidnapping.  Rhoden was arrested pursuant to a warrant, Cox said; he added that Rhoden had ties to the Atlanta metro area.

Cox described Rhoden as the “lone shooter” in the case.

The suspect is being interviewed by @cobbpolice1.

Golf pro Gene Siller was shot to death at the Pinetree Country Club in Kennesaw on the afternoon of July 3rd, authorities have previously said. They believe Siller stumbled across the killings of Henry Valdez, 46, of Anaheim, Calif., and Paul Pierson, 76, of Topeka, Kan., and was likely killed for having done so. The two latter men were found dead in the back of a white Dodge Ram pickup truck which was leaning into a sand trap on the tenth hole of the golf course. Pierson owned the truck.

An arrest warrant released Friday says Rhoden “bound the hands, legs, and mouth” of both Valdez and Pierson “with tape.”  The documents also accuse Rhoden of Driving the truck with the bodies of those two men in the bed of the vehicle.

Cox said Thursday evening that several of his officers “slept in their offices” while “tirelessly” trying to solve the perplexing case. 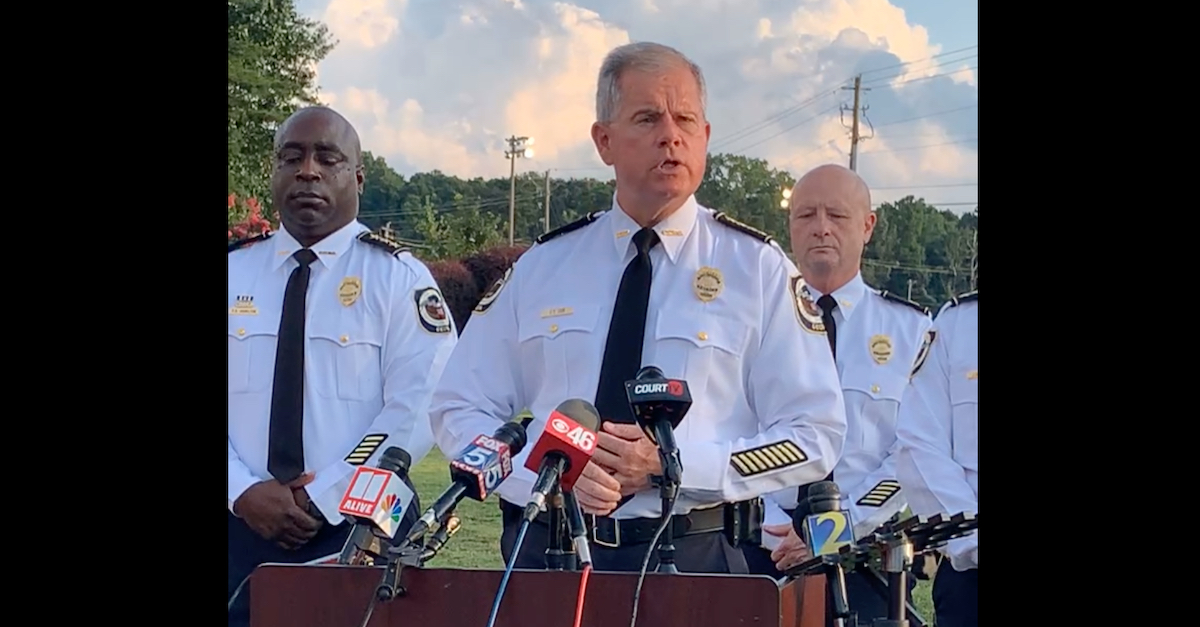 “His name came up within a few days,” Cox said of Rhoden, but Cox refused to release details as to precisely how or why.

The chief reiterated that the investigation was still open.

Cox added that the suspect did have a prior arrest record but would not go into detail.

“I realize that some members of the community felt some frustration” due to the “limited information” that has been disseminated to date, Cox said.  He said he was most worried about providing “justice” to the victims’ families and that his “number one” goal is a successful prosecution — which oftentimes takes time and holding some information close to the vest.

Cox said he could not discuss why the suspect may have driven onto the golf course in the first place.  It has been widely reported that neither Valdez nor Pierson had ties to the country club. 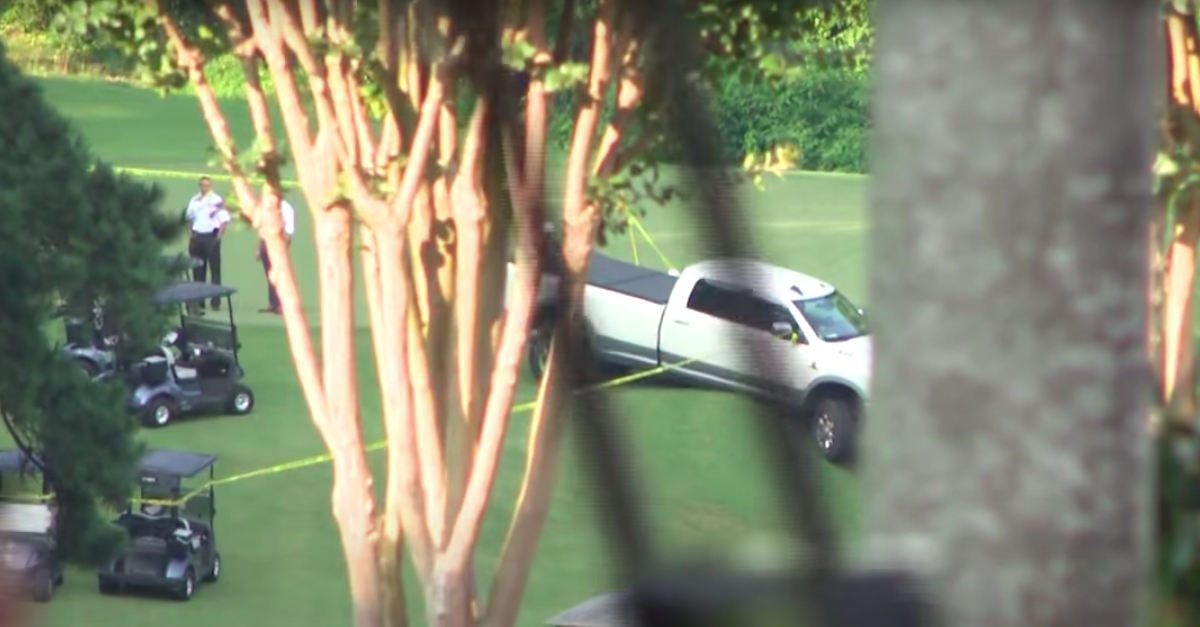 The scene of the alleged murders at the Pinetree Country Club in Kennesaw, Ga.

As Law&Crime was the first to report on Thursday evening, jail records available through the DeKalb County, Ga., Sheriff’s Office indicate that an inmate bearing the name Bryan Anthony Rhoden was booked on July 4 at 1:54 a.m. — the night after the three men’s bodies were discovered on the golf course in Cobb County — and was subsequently released on bond on July 6 at 8:35 p.m.  Arrest information attached to that booking report indicates that Rhoden was suspected of six charges in DeKalb County which are alleged to have occurred at some point on July 3.  Those six charges are DUI, driving an unregistered vehicle, carrying a false identification document, operating a vehicle without insurance, acquiring a license plate for the purpose of concealing the identification of a motor vehicle, and a headlight violation.  All are misdemeanors.  It was not immediately clear from the records what connection, if any, those six incidents may have had to the July 3 incident at the golf course, as the assembled authorities who spoke on Thursday evening (July 8) did not divulge details about their murder suspect beyond confirming that he had a prior arrest record. 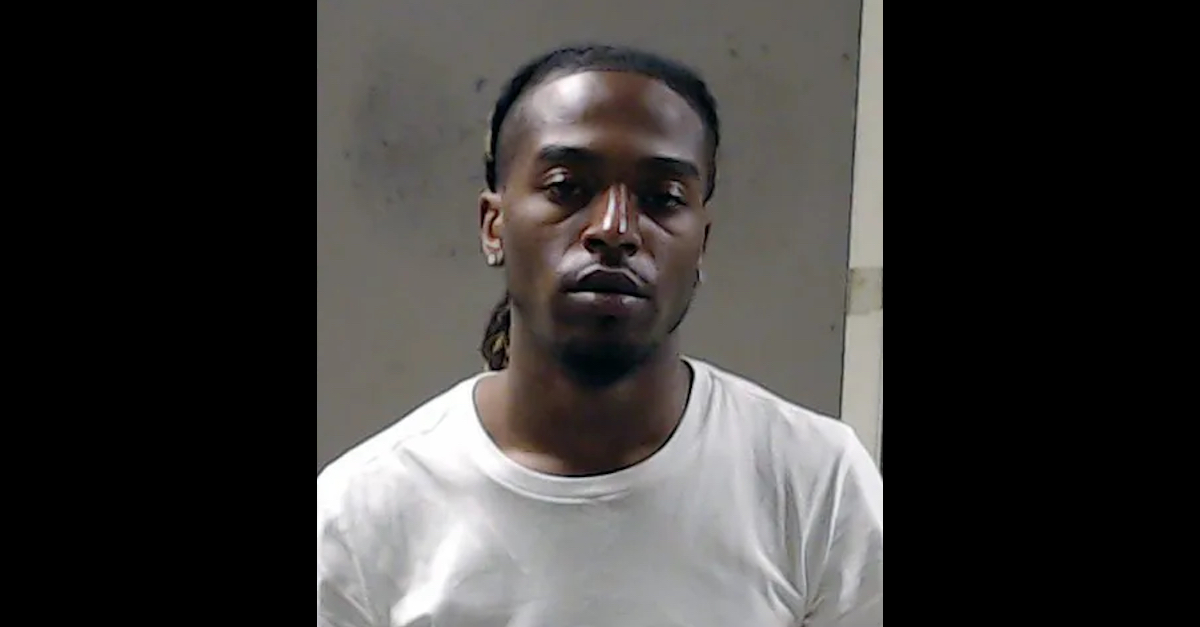 Bryan Anthony Rhoden is seen in a DeKalb County mugshot.

A court docket entry appearing on the DeKalb County Judicial Information System website indicates that a prosecution was commenced concerning the six misdemeanors, but it does not contain much additional relevant information. Rhoden, as charged in the DeKalb County case, is listed as 23 years old and as having a midtown Atlanta address.  The arresting agency on the misdemeanors was the Chamblee Police Department.

Though the authorities on Thursday did not directly identify the Bryan Anthony Rhoden charged in the six DeKalb County misdemeanors the same suspect accused of committing the triple alleged murders, a warrant document filed Friday in the Cobb County golf course confirms that the name and address of the suspect there is the same as in the DeKalb County case.  Jail records in Cobb County also contain the same address.

Records maintained by the Cobb County Jail say Rhoden was booked in that jurisdiction starting at 11:22 p.m. on Thursday, July 8.  The booking process is listed as having been completed at 5:12 a.m. on Friday, July 9.  Rhoden remains in custody in Cobb County as of the time of this writing.  A court appearance is scheduled for Friday evening.

Read the warrant documents below:

[Editor’s note:  this report has been updated several times.]