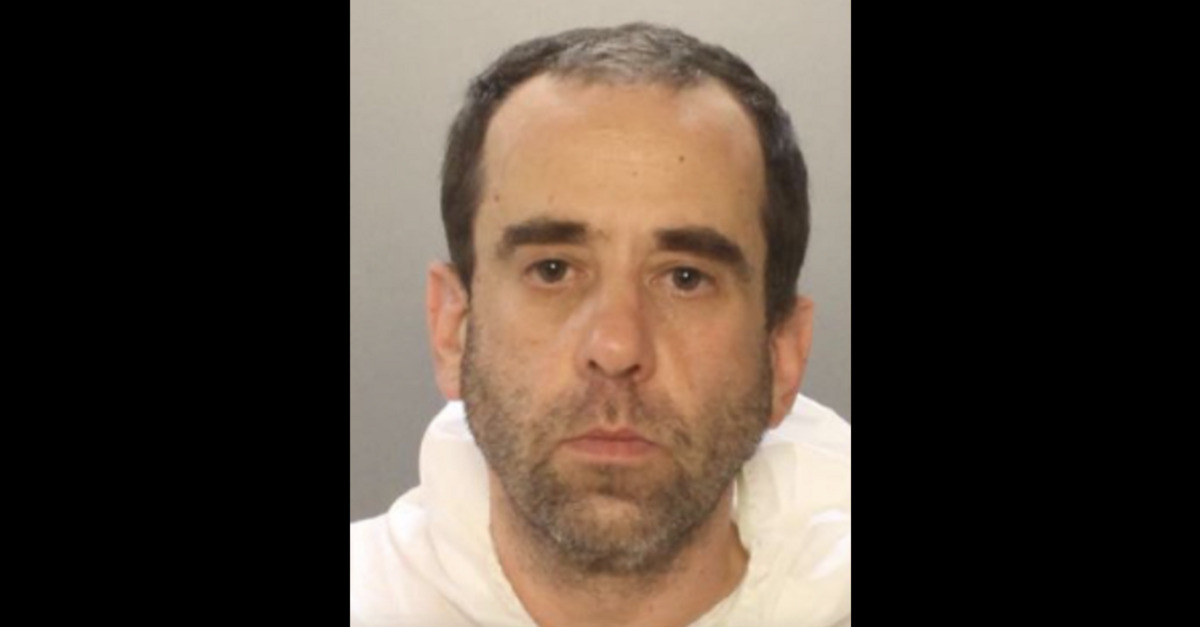 A Philadelphia man has been charged with allegedly murdering a woman who was beaten to death with a pipe earlier this week.

Jeffrey Stepien, 49, stands accused of one count of murder and one count of possessing an instrument of crime over the Wednesday incident. Court records obtained by Law&Crime do not indicate the degree of murder the defendant has been charged with at this time.

According to the Philadelphia Police Department, Stepien killed 31-year-old Samantha Maag on the eighth floor of the Regus building in the Old City neighborhood. Officers arrived at the location just after 2 p.m. on the day in question after receiving nearly two dozen 911 calls about a person screaming and another person with a weapon.

Law enforcement say they found Stepien attempting to exit in an elevator on the first floor. He was allegedly holding a bag that contained two pipes covered in blood. The pipes are said to be some two feet long and roughly one-inch wide. Witnesses also allegedly identified the defendant as Maag’s assailant, according to PPD Corporal and spokesperson Jasmine Reilly, local NBC affiliate WCAU reports.

Police also say the attack was caught on surveillance footage.

As officers entered the eighth floor, they found Maag suffering from severe head injuries as well as wounds to her hands and arms. The ground around her body was also covered in blood, police say.

Witnesses allegedly told police Maag was sitting in the receptionist chair at an office when Stepien approached and hit her in the head at least five times with one of the pipes. The defendant allegedly attacked her from behind, according to The Philadelphia Inquirer.

The victim was rushed to nearby Jefferson University Hospital, where she was pronounced dead at 3:16 p.m.

A motive is not yet certain in the brutal slaying. Law enforcement have issued contradictory statements.

On Thursday, PPD Chief Inspector Frank Vanore said he believed Stepien had been renting office space inside the building and a dispute occurred after it came out that the defendant was living there.

“We’re assuming that there was some kind of notification given to him,” Vanore told the Inquirer, emphasizing that police were not aware of any previous conflicts between Stepien and Maag.

In comments to WCAU, however, PPD Chief Inspector Scott Small said police believed there were prior issues that came up between the alleged murderer and his alleged victim.

“We know that they know each other,” Small said. “We believe there may have been some arguments or problems in the past. However we are still working on that information by interviewing some witnesses.”

There is no indication, police say, that the violence was domestic in nature or that Stepien and Maag ever had a romantic relationship.

Sean Riskowitz works on the eighth floor and recently spoke to local CBS affiliate KYW-TV about the defendant in the case.

“They told me what office he was in,” he told the station. “I like picture the guy, I know who he is. There is not a lot of people on the floor.”

“Blood on her desk and other chairs and items strewn about,” Riskowitz reportedly said before turning his attention to Maag. “She would run the office. I would come in every day and see her, very nice girl.”

The defendant was arraigned Thursday morning and is being represented by the Defender Association of Philadelphia.