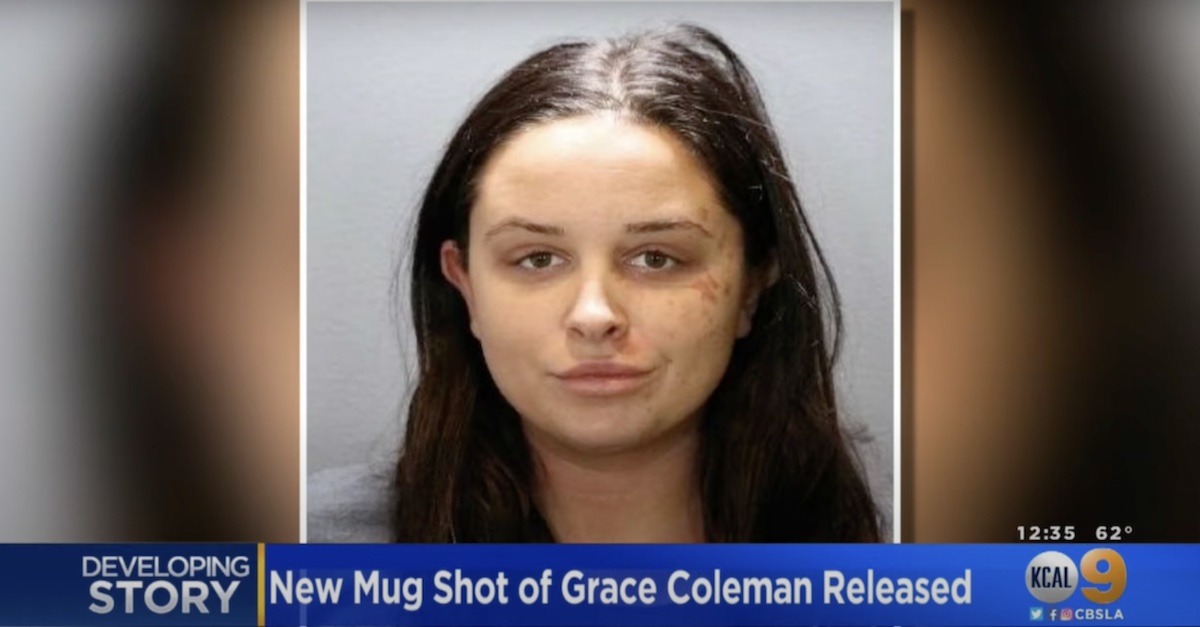 A 23-year-old California woman was sentenced Friday to at least 21 years in prison for a drunken hit-and-run crash that killed a young mother and father who were looking at Christmas lights with their three young daughters.

Two of the orphaned girls spoke briefly in court to Grace Elizabeth Coleman before a judge sentenced her, reading letters they’d written their parents in what the family’s lawyer told Law&Crime was “probably the most moving thing I’ve ever seen.”

Coleman didn’t make a statement during the hearing, but she earlier privately spoke with family of Henry Saldana-Mejia, 27, and his wife, Gabriela Andrade, 28, in a rare meeting arranged at the courthouse but not attended by defense lawyers, prosecutors or a judge, said Roberts, of Roberts | Jeandron Law Firm in Newport Beach, California.

“It was just Grace Coleman and a couple of the family members,” Roberts said. “They believe she’s very remorseful. They believe she made a very, very bad choice.”

But, Roberts added, “They’re not an angry, vitriolic family. They didn’t mention hatred of any sort.”

Roberts is suing Coleman and her parents, James and Kelli Coleman, of Newport Beach, alleging wrongful death and negligence. He blames the parents for allowing her to continue driving a 2010 Land Rover Range Rover they’d gifted her even after two bouts of drunken driving in June 2019 and August 2020.

“What this girl needed was help, not a Range Rover,” Roberts said.

Prosecutors say Coleman had a blood-alcohol level of .22 — nearly three times the .08 legal driving limit in California — when she sped her Range Rover through a red light at 75 mph on Dec. 8, 2020, and collided with a Nissan Versa driven by Saldana-Mejia.

Saldana-Mejia and Andrade were killed, and their three young daughters, Emma Sofia, Elena and Samantha were injured and trapped in the car as Coleman tried to walk away from the crash. The family had been driving around Newport Beach looking at Christmas lights. Coleman had been arrested about three months earlier on suspicion of drunken driving.

The girl’s grandmother joined them at the lectern while holding 3-year-old Samantha, Roberts said. The girls’ legs were broken in the crash, Roberts said, but they’ve now recovered physically and are living with their maternal aunt in San Diego with the support of other family.

Coleman wore a mandatory mask during the hearing that hid much of her reaction, but Roberts said she “did keep her attention on all the speakers, which I thought was appropriate.” He said he thinks about “how this is just another example of a drunk driver ruining multiple lives – including her own and then the people around her.”

Roberts said the Orange County District Attorney’s Office was refusing to negotiate a plea deal for less than 30 years, so Coleman’s lawyer asked for what’s called an indicative sentence for Prickett, in which the judge predicts the sentence he may impose should a defendant plead guilty.

The judge said he wouldn’t impose a sentence longer than 15 years, so Coleman on June 24 pled as charged to the two murder counts as well as felony driving under the influence of alcohol causing bodily injury, felony driving with a blood alcohol of .08 or more causing bodily injury and felony count of hit and run with injury. She also admitted three felony enhancements of great bodily injury for injuring Emma Sofia, Elena and Samantha, as well as one misdemeanor count of driving with a blood alcohol of .08 for her August 29, 2020, arrest.

Senior Deputy District Attorney Jennifer Walker prosecuted the case. Orange County District Attorney Todd Spitzer said in a press release that Coleman is now “a convicted murderer who will have to live with the screams of three injured little girls trapped in their car seats playing over and over in her head for the rest of her life.”

“These young parents were just trying to share the magic of Christmas with their three little girls and it ended in the most horrific and completely avoidable tragedy,” Spitzer said. “The magic of Christmas turned into a real life nightmare for this young family because a 22-year-old who knew the dangers of drinking and driving got behind the wheel and did it anyway.”

Roberts’ lawsuit has been on hold pending resolution of the case, but he plans to continue searching for possible sources of compensation for the orphaned girls. Had the vehicle that hit them been connected to a large commercial entity, “this would be a $30 million case,” he said.

Roberts wants to ask Coleman more about her activities the day of the crash to see “is there anyone else in addition to Grace and her parents that could be liable and could be a source of compensation for the girl’s loss of their parents.”

“I’ll have to travel to to whatever California state prison she’s in and take her deposition,” he said.

An assistant at Wesierski & Zurek LLP, which is defending the Colemans in the lawsuit, declined comment on Friday.