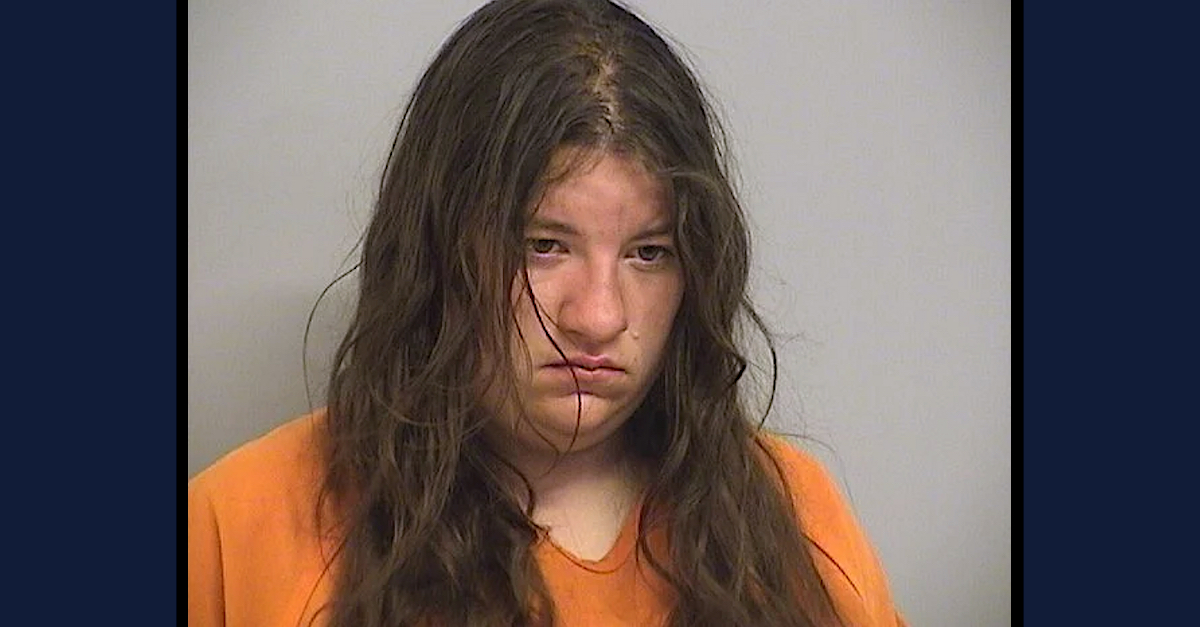 A 30-year-old woman has admitted to strangling a female victim to death during an argument over food stamps and then twice trying to set the victim’s body on fire in an effort to cover up the crime, the U.S. Attorney’s office for the Northern District of Oklahoma announced on Friday.

“The victim, Tracy Russell, had previously allowed the defendant and her boyfriend to stay with her in exchange for assistance with groceries,” the Department of Justice wrote in a press release.

However, the victim later requested that the defendant and her boyfriend leave the residence, the DOJ said.

In a plea agreement, McBride admitted she left — but then came back.  The document contains the following confession signed by the defendant:

The signed confession says the defendant again left the premises.  However, she admitted that she returned three days later to try to finish the job:

Then, on March 20, 2019, I returned to [the house] with lighter fluid intending to set fire to the residence with Tracy Elaine Russell’s body inside.  I understand the residence . . . was being rented and so effected interstate commerce.  I understand Tracy Elaine Russell is an Indian, a member of the Cherokee Nation by blood and recognition.  I understand this occurred in Indian Country and in the Northern District of Oklahoma.  While I am of Indian heritage, I am not a recognized member of any federally recognized native American tribes and so do not count as an Indian for purposes of federal criminal jurisdiction.

The defendant’s signature attached to that narrative bears a date of Sept. 22, 2022.

Prosecutors noted in a press release that the accusations that the victim had stolen food stamps “were never substantiated.”  They also said the defendant’s choices of fuel on March 20 were “gas camp fuel and lighter fluid.”  They further reported that an undercover law enforcement operative witnessed the defendant’s second attempt to torch the victim’s body and home.

“I bought some camp fuel and we have to do it tonight,” the defendant allegedly texted the confidential source, according to an arrest affidavit filed by law enforcement back on March 15, 2021.

After being caught in the act by the police during the second attempt to burn the victim’s body, the defendant allegedly vouchsafed that the cause of death was a “rear choke hold” she applied to Russell for approximately ten seconds.

The recitations in the signed confession about ethnic heritage and the location where the crimes occurred were necessary elements of the offenses alleged.  Federal prosecutors handled the case because it occurred in “Indian Country,” which a legal term of art.

McBride pleaded guilty using a so-called “C” plea, which is a relatively rare type of plea that derives its name from Rule 11(c)(1)(C) of the Federal Rules of Criminal Procedure.  Agreements made under that subsection of the relevant rule are sometimes referred to as “sentence bargain agreements” because they lock judges into a very specific punishment (or sometimes a narrow sentencing range).  Most federal defendants plead guilty via “B ” pleas, which are named after Rule 11(c)(1)(B) and which afford judges considerably more discretion at sentencing.  So-called “C” pleas do not allow judges discretion at sentencing and are at times wholly rejected by judges for that very reason.

The most serious crime to which the defendant admitted guilt carries a potential maximum sentence of 15 years in prison and a $250,000 fine.  Here, because of the type of plea entered, the defendant and prosecutors stipulated that “the appropriate disposition” of the case was indeed a 15-year prison sentence and an additional five years of supervised release.

The defendant agreed to a maximum sentence in part because the government “agree[d] to a voluntary manslaughter conviction rather than a murder in the second-degree conviction,” the plea agreement states.

In other words, the government dropped the most serious counts, and the defendant agreed to the maximum sentence possible for the lesser offenses chosen.

McBride had originally been indicted on charges of second-degree murder; arson; attempted arson; and attempting to alter, destroy, mutilate, and conceal evidence.  Prosecutors dropped most of those charges in return for the two guilty pleas noted above for voluntary manslaughter and attempted arson.

The plea agreement says both the prosecution and the defense were taking into account “the defendant’s alcoholism and intoxicated state during the crime” when contemplating the punishment.

The defendant can withdraw the plea agreement if a federal judge does not accept it.

Prosecutors seemed pleased the resolution of the matter.

“Jessica McBride stayed in the home of the victim, and in return, she took her life because of missing food stamps,” said statement by U.S. Attorney Clint Johnson of the Northern District of Oklahoma. “My office and our law enforcement partners at the Tulsa Police Department and FBI will continue to hold perpetrators, like McBride, accountable for their criminal acts.”

The criminal complaint, the affidavit, a subsequent indictment, and the eventual plea agreement are embedded below for reference.