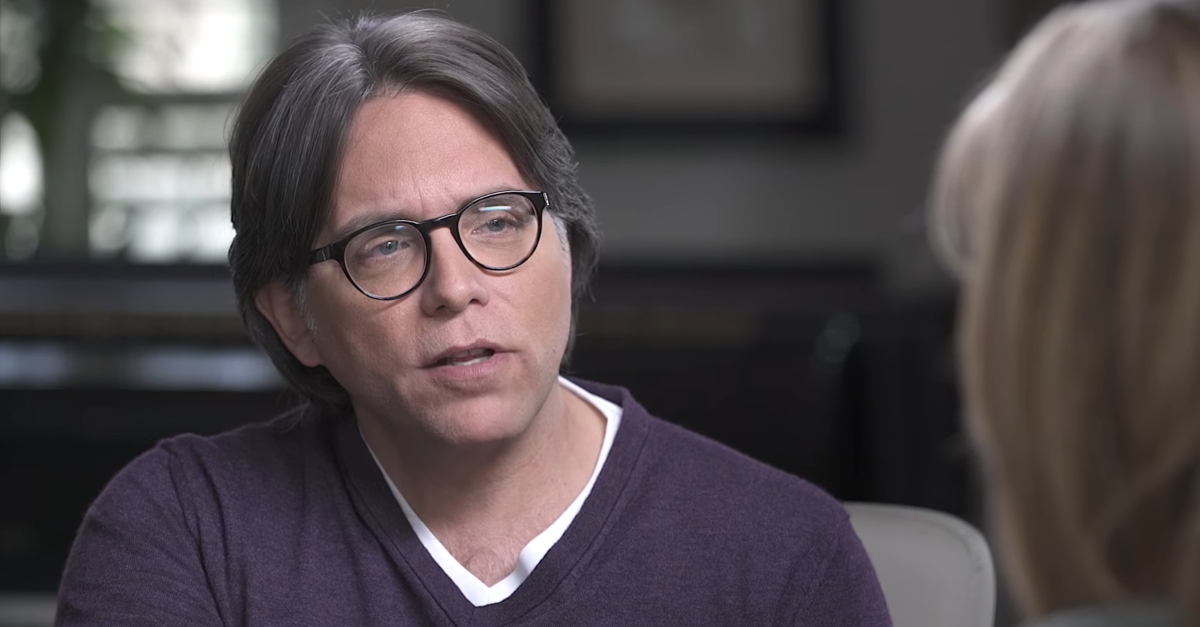 NXIVM founder Keith Raniere, who ran what has been called a sex “cult” with women branded as his “slaves,” failed to overturn his 120-year sentence following his convictions for sex trafficking.

On Friday, the Second Circuit Court of Appeals rejected his more limited definition of “commercial sex act” that his attorneys argued would have excluded his conduct. The three-judge panel agreed that the statute’s requirement of proving the transmission “anything of value” includes the sexual gratification he received from his victims.

In 2003, Raniere founded NXIVM as a supposed self-help organization where members would pay thousands to attend workshops in upstate New York. Two years later, Raniere created a secret society within the organization known as DOS, comprised of “masters” and “slaves.” Smallville actress Allison Mack, also serving time in federal prison as one of Raniere’s convicted accomplices, was one of the “masters” in the group, with Raniere at the top of the pyramid.

Another prominent member of NXIVM was Seagram’s heiress Clare Bronfman, whose 81-month sentence was also affirmed.

Many years would pass before the activities inside DOS — short for “Dominus Obsequious Sororium,” which loosely translates from Latin to “Master Over the Slave Women” — would come to public light. The initiation ceremonies would include the branding of female initiates, in the words of one of the victims, “like cattle.” The insignia burned into their skin, unbeknownst to the women, included Raniere’s initials.

As the Second Circuit’s ruling notes, the women would be required to be nude while saying: “Master, please brand me. It would be an honor, an honor that I want to wear for the rest of my life.”

A restitution order accompanying Raniere’s sentence compensated the branded women for “past and future” plastic surgery expenses to remove the marks.

Federal sex trafficking law describes a “commercial sex act” as one during which “anything of value is given to or received by any person.” Raniere’s lawyers argued that the law had been “designed to punish sexual exploitation for economic profit.”

Cabranes, the lead author of the opinion, noted that Congress chose to use the word “any” three times in the statute.

“Congress’s repeated use of the word ‘any’ in its definition ‘commercial sex act’ further supports an expansive understanding of the specific phrase at issue here, ‘anything of value,'” the opinion states.

After establishing such a broad definition, the judges found that the government’s evidence presented to the jury easily meets it.

“The Government did in fact present evidence at trial that DOS ‘masters,’ including Mack, obtained ‘things of value’ in connection with assigning their DOS ‘slaves’ to engage in sexual acts with Raniere,” the 24-page opinion states. “For example, the Government presented evidence that Mack was able to maintain and strengthen her privileged position in the DOS hierarchy because of the relationship between Raniere and one of Mack’s ‘slaves,’ Nicole. The Government also presented evidence that Raniere set an expectation that DOS ‘masters’ would receive approximately 40 hours of ‘work’ per week from their various ‘slaves.'”

Though Raniere denied that there was no proof of coercion, the Second Circuit found that the testimony of his victims established otherwise. DOS members would be forced to provide compromising materials before their initiation to be held as “collateral.”

“Nicole testified that she felt that she had ‘[n]o choice’ in complying with Mack’s instruction to ‘tell [Raniere] that [she] would do anything that he asked [her] to do,'” the opinion states. “She further testified that she had submitted ‘collateral’ to Mack in the form of, inter alia, letters implicating her family members in criminal activity, a sexually explicit video, and a letter about a prominent former romantic partner that could ‘ruin [Nicole’s] career.'”