‘Not Even Something You’d See in a Horror Movie’: Gruesome Details Emerge in Attack that Left Michigan News Anchor Dead and His Family Hospitalized 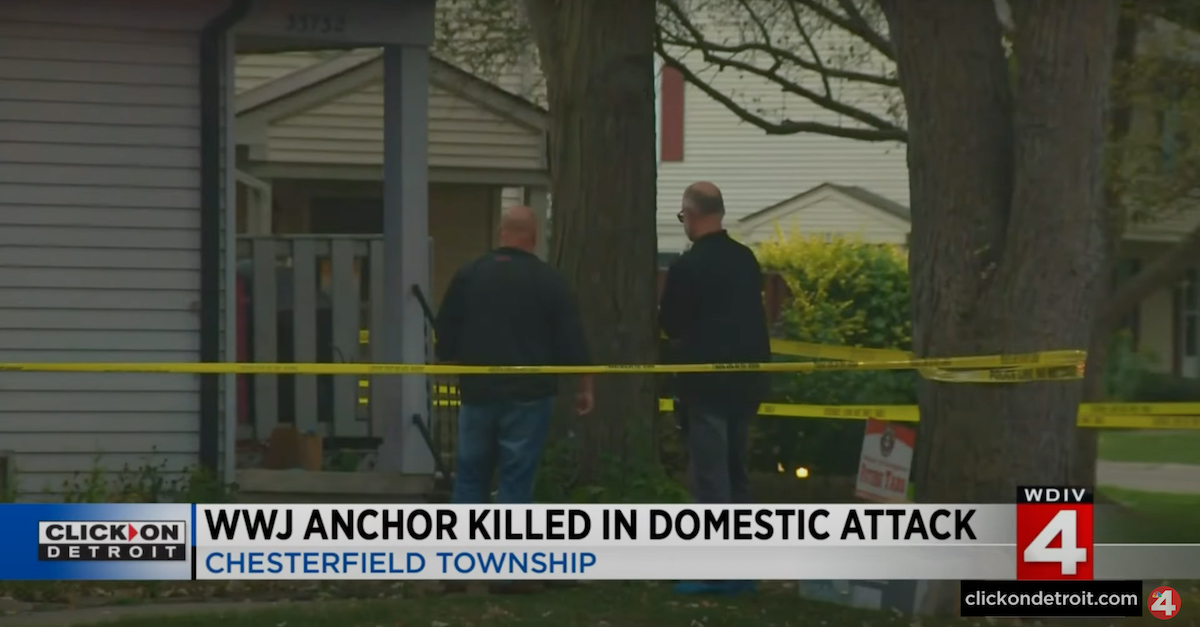 A WDIV-TV screengrab shows the scene were Jim Matthews was killed.

UPDATE: The suspect has been identified as Arthur Levan Williamson.

Horrific new details have emerged in the death of a Michigan news anchor who was killed inside of his home last week. The attack, which also left his 10-year-old son in critical condition and his girlfriend and 5-year-old daughter hospitalized, is believed to be an attempted murder-suicide carried out by a man who visited the family.

The identities of the other victims and the alleged assailant have not been released by authorities, but the victims’ families have provided additional information about the horrific attack. According to a GoFundMe page created Sunday by Ashley Quigley, the sister of Matthews’ girlfriend and mother of their two children, that her niece is “doing well,” but her nephew remains in critical condition.

The 10-year-old boy was discovered bound and locked in a closet inside of the home after having sustained a “blunt force trauma” injury.

“Last night he was forced to undergo brain surgery and ear surgery,” Quigley wrote on Sunday. “He has come through both successfully. He is still currently sedated and is staying in the Pediatric ICU.”

She later provided an update on the situation and an optimistic prognosis on the victims’ conditions.

“I am happy to say my older sister and my niece are both in stable condition. I am also happy to say that my niece is still acting like her normal happy self though she does somewhat understand the situation going on,” Quigley wrote. “My nephew has had a few victories of his own. Thankfully, his surgery was very successful, and after some tests and scans, his neck was deemed okay. He was able to take off his C-Collar which helped make the swelling in his face go down. He is still sedated while he heals, but he can move both sides of his body.”

A previously reported by Law&Crime, officers with the Chesterfield Police Department on Friday afternoon responded to a 911 call about a violent attack at a home located in the 33000 block of Bayview. The caller — later identified as Matthews’ girlfriend — told the emergency dispatcher that she and a 5-year-old child had “escaped” from the home where they were attacked, despite the fact that she had sustained multiple stab wounds.

Matthews’ brother, Joe Nicolai, said there was also evidence that Guertin was restrained before making her escape.

“Nicole, my brother’s girlfriend, was laying out in the parking lot and was duct-taped and bleeding so my wife went out to hold her hand,” Nicolai reportedly said in an interview with Detroit ABC affiliate WXYZ-TV. “It’s not even something you’d see in a horror movie.”

While many of the details surrounding the attack remain unknown, police confirmed that the alleged attacker was a 54-year-old man who frequently visited Matthews’ home and knew the family well. The alleged attacker was found in the basement of the home suffering from a self-inflicted wound and an apparent overdose.

He was reportedly resuscitated using Narcan and was hospitalized and in stable condition following the attack.

The motive and the nature of the man’s relationship with the family both remain unclear.

“There is no motive, I don’t know why he was in the house. I talked to the lead investigator, and my brother probably came home to this. He comes home about 5:30 in the morning and was probably surprised and attacked,” Nicolai told the station. “I believe that [Matthews’ son] was trying to fight off this man that was attacking and trying to kill his father, and that’s how Hunter ended up injured and tied and put into a closet.”

“He loved taking care of his kids, he loved being on the radio,” Nicolai reportedly said. “He used to play radio when he was a kid. He would play DJ, that was his passion. he was a really amazing person.”

Chesterfield Public Safety Director and Chief of Police Brian Bassett reportedly told the Macomb Daily that the suspect is currently being held in the Macomb County Jail and is expected to be arraigned Monday or Tuesday.

The GoFundMe page has raised over $13,000 for the family as of Monday morning.