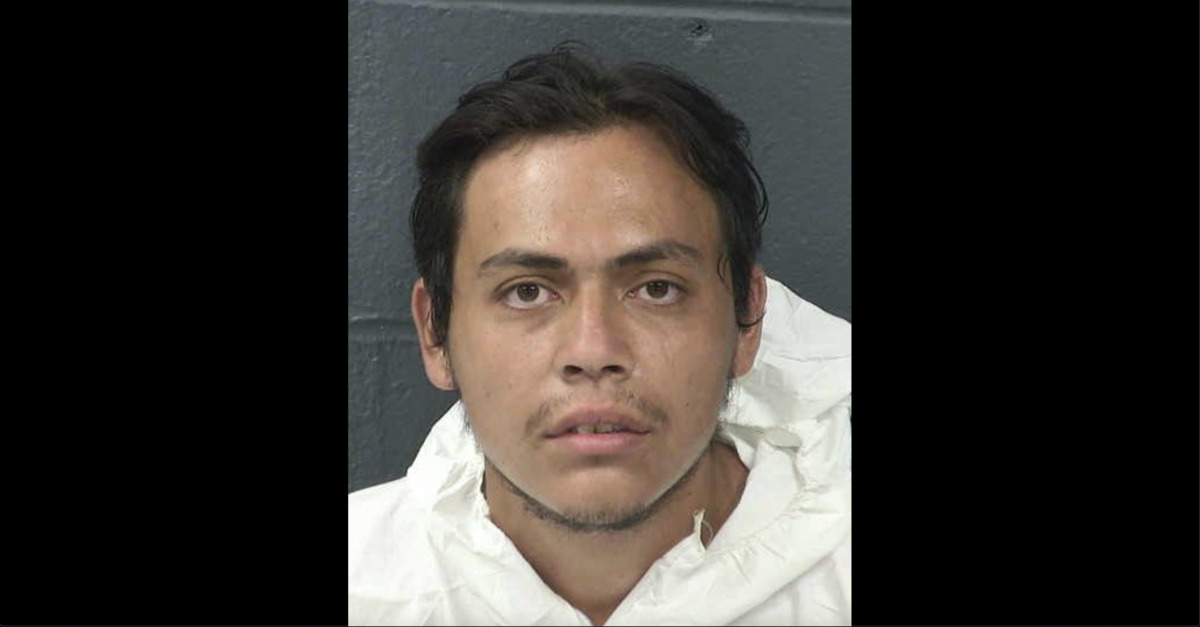 A New Mexico man has been charged with murder after allegedly decapitating a man and playing soccer with his head in a public park.

Joel Arciniega-Saenz, 25, stands accused of murder in the first degree by authorities in Las Cruces over the weekend slaying of 51-year-old James Garcia in Apodaca Park. The defendant is currently being held without bond in the Doña Ana County Detention Center.

According to court documents obtained by El Paso, Texas-based NBC affiliate KTSM, Garcia’s body was discovered by the Las Cruces Police Department on Sunday night — roughly 10 yards away from his head.

Aside from the decapitation, police say the victim’s body had been further mutilated; he was littered with stab wounds and the middle finger on his right hand had also been removed.

Arciniega-Saenz was arrested without incident soon thereafter and allegedly confessed to the gruesome crime.

According to a statement cited by the TV station, Arciniega-Saenz owned up to the murder as retaliation for Garcia allegedly raping his wife four years ago. The defendant allegedly told police that the three of them were hanging out together days prior to the murder when he and his wife fell asleep. Arciniega-Saenz went on to tell officers that when he woke up, Garcia had left and stolen all of their belongings, police claim.

The defendant then allegedly said he confronted Garcia at the park, took a switchblade from him, stabbed him to death, decapitated him, and “then played soccer with his head.” He allegedly admitted to kicking the victim’s head toward 14 separate vehicles.

The defendant became an immediate suspect in the killing after officers who responded to reports of a body laying on the ground allegedly found him with “significant blood stains” on his clothes and saw “a bloody knife stuck in the ground near where he was seated,” according to the affidavit cited by local ABC affiliate KVIA.

In an update, police noted that Garcia’s cause of death was likely “multiple sharp force injuries,” the outlet reports.

The defendant in the Garcia killing has previously dodged a murder charge.

Arciniega-Saenz was originally the lead suspect in the 2017 shooting of 21-year-old Benjamin Isaac Montoya. The once-and-future murder defendant allegedly got into a fight with Montoya at a hotel in Las Cruces, leading to the victim being fatally shot in the chest. The murder weapon was never found, however, and prosecutors dropped charges in 2018.

“I just got angry,” Montoya’s sister, Krystal Montoya, told El Paso Fox affiliate KFOX after learning about the recent charges against the man she still believes killed her brother. “I stared at my phone and at the floor and got angry.”

This isn’t the first time those memories have been unceremoniously dredged up.

Arciniega-Saenz was the subject of media scrutiny last month after being accused of throwing rocks at businesses in the Mesquite Historic District of Las Cruces.

“At first I read it and I was like ‘Oh god there is another one’,” Montoya told the outlet. “When the name was said I was like ‘That name sounds very familiar.'”

Initial police reports cited by local media said that officers were responding to “suspicious circumstances” at the park when a body was discovered who was the victim of “apparent foul play.”