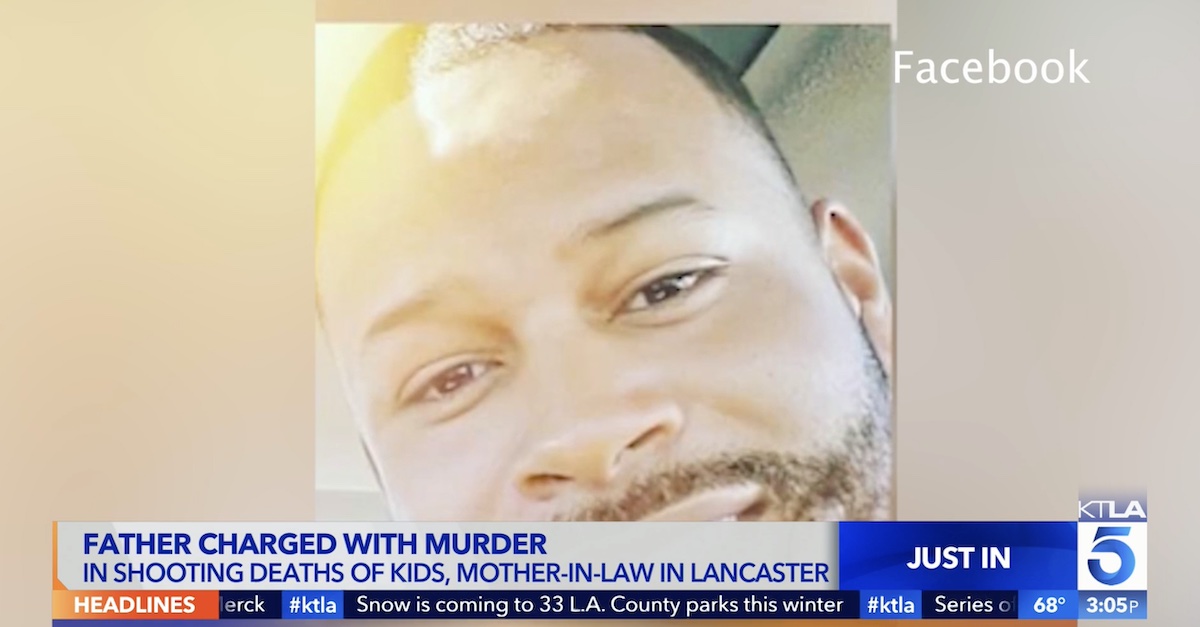 A California man accused of fatally shooting his mother-in-law and four young children before walking into the lobby of the sheriff’s office and turning himself in is now facing multiple murder charges, prosecutors said. Los Angeles County District Attorney George Gascón on Tuesday announced that his office charged Germarcus L. David with five counts of murder and three counts of assault on a child causing death.

“No family should endure this type of tragedy, especially when the alleged perpetrator was responsible for their protection,” Gascón said in a press release. “Our office has reached out to the family to ensure they have all the services and support they need during this difficult time.”

Los Angeles CW affiliate KTLA confirmed that the children’s mother was the person who entered the home Sunday evening and discovered the bodies of her mother and four kids before calling 911.

Reginald Beltran, a neighbor who lives three houses away, said he could hear the woman screaming after she entered the grisly scene allegedly left behind by her husband.

Grace Beltran reportedly said that she saw the children’s mother running “back and forth in their front yard” while screaming, “My babies are gone! They’re all dead!”

Deputies with the Lancaster Sheriff’s station arrived at the Garnet Lane home at approximately 10:27 p.m., the Los Angeles County Sheriff’s Office said in a press release.

Upon arriving on the scene, first-responders reportedly found Erika England and the children dead from apparent gunshot wounds “to the upper torso.” Per the release, all five of the gunshot victims were pronounced dead on the scene by responding paramedics.

Deputy Tony Moore of the Sheriff’s Information Office said the children’s father voluntarily turned himself in to investigators later that evening.

“A male Black adult, believed to be the father of the juvenile victims, was detained when he arrived at the Lancaster Sheriff’s Station lobby,” the office said.

He was placed under arrest at approximately 11:39 p.m. after reportedly spending multiple hours being interviewed by detectives, per KTTV.

Sheriff’s Lt. Brandon Dean told KTLA that there were no restraining orders against David, nor had officers ever been dispatched to the home over reports of domestic violence.

David was reportedly a former licensed security guard who had a permit to carry a handgun that expired in August 2020.