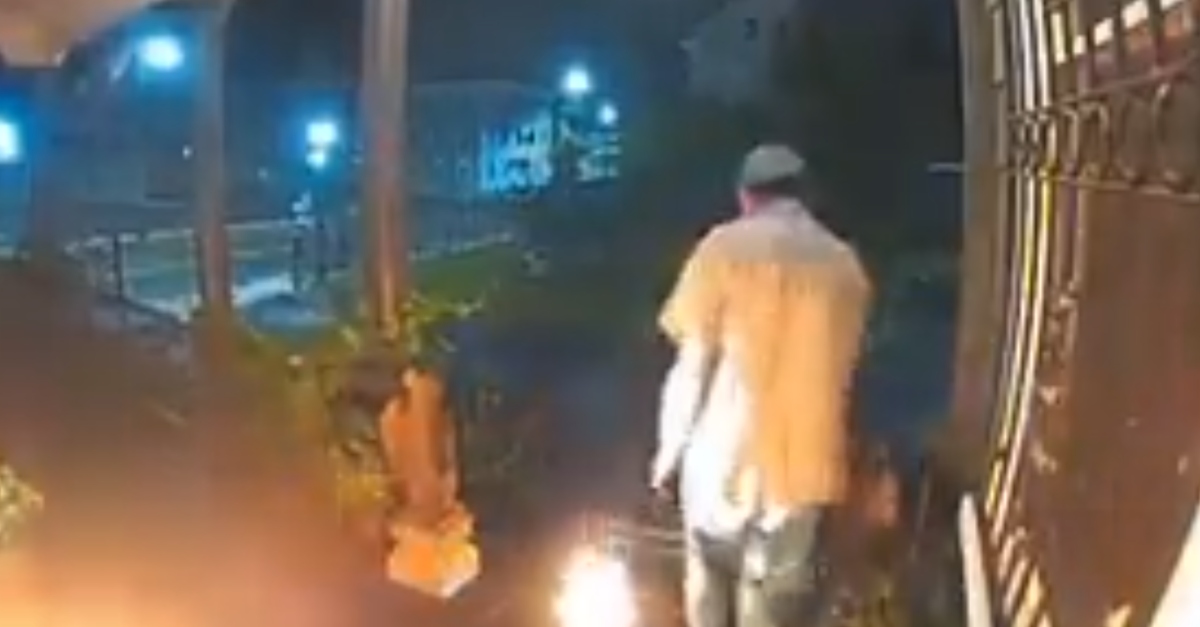 As seen on surveillance footage, a man set fire to the front porch of the Satanic Temple in Salem, Massachusetts. Police said they arrested Daniel Damien Lucey, 42, as the person allegedly behind this arson.

Much of the fire damage is on the front porch area. Police say Lucey admitted to traveling to Salem for the express purpose of setting fire to the Temple. He’s charged with: Arson of a Dwelling, Civil Rights Violations & and Destruction of a Place of Worship. @NBC10Boston @NECN pic.twitter.com/ZsBWcwGo8W

Officers said they got numerous 911 calls on Friday at approximately 10:05 p.m. regarding a building set on fire at 64 Bridge Street. It was the Satanic Temple.

“Upon arrival, officers discovered the front porch of the structure on fire,” police said. “Efforts by the responding officers to extinguish the flames with fire extinguishers were unsuccessful. The building, which was occupied at the time, was evacuated and the Salem Fire Department was able to contain and extinguish the blaze. The Temple sustained damage to the front porch area; no injuries were reported.”

A person set that fire on purpose, pouring a flammable liquid on the porch, police said. Police announced that they arrested Lucey without incident. He admitted he traveled to Salem to set fire to the Temple, cops said.

“Lucey made statements that he considered his actions a ‘hate crime,'” officers said.

He was charged with arson of a dwelling, civil rights violations, and destruction of a place of worship.

Satanic Temple head Lucien Greaves, who was in the temple at the time of the fire, said that this started the opposite of a holy war, with him getting messages from fans as well as locals and religious people, according to The Boston Herald.

“This whole incident has had the paradoxical effect of making us feel more welcome than we ever have,” he said.

The fire did not breach into the house. It remains to be determined how much of the area around the front of the house, and how much of the front porch will need to be replaced due to damage. The outpouring of support has been truly moving. Thank you, everybody

A story told in pictures.
We will fix it. We will clean it up, air out the smoke, and we will reopen.
We are extremely grateful to be in Salem, and a part of the Salem community, which has been nothing but helpful and supportive. pic.twitter.com/DWzj6VwpeJ

“I do not feel that this man is representative of Christians or anything,” Greaves told the Herald. “It would be nice if people took this as a reminder to take a moment to lay off the outrage a bit and take a moment to speak to people they might disagree with.”