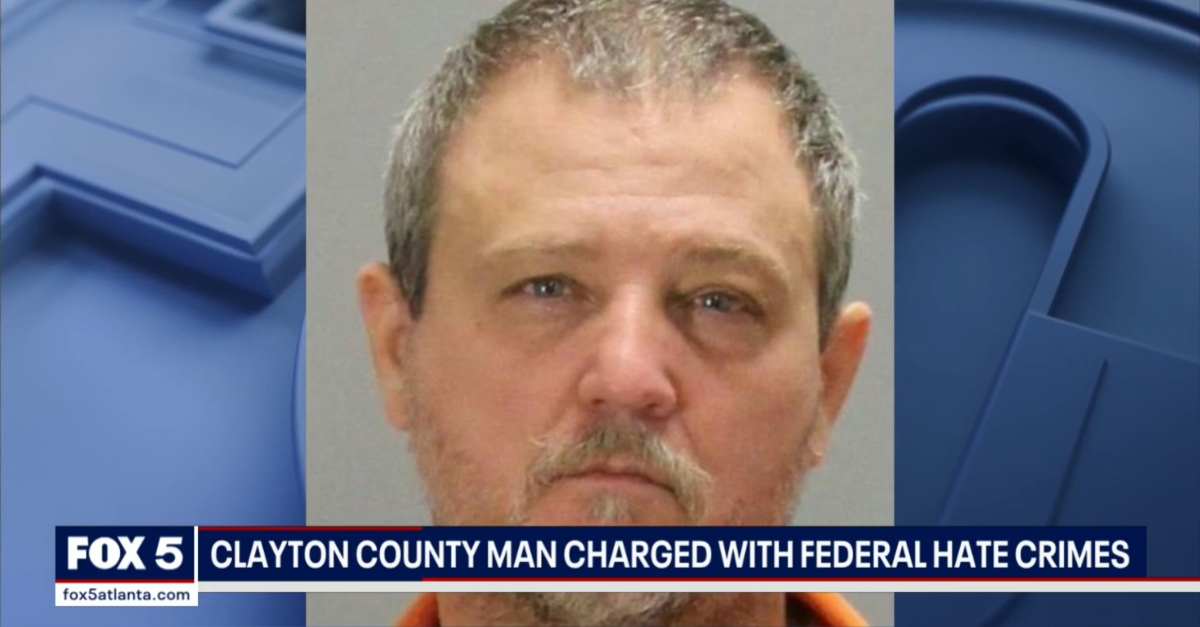 A Georgia man now faces hate crime charges for allegedly open fire at two gas station convenience stores. Larry Edward Foxworth, 48, admitted to acting out of racial animus, though he insisted he only fired at the second location on after making a U-turn and believing he was still aiming at the first, officers said.

Federal prosecutors announced their case on Wednesday. Foxworth is charged with two counts of committing a federal hate crime and discharging a firearm in furtherance of a crime of violence. He fired into two convenience stores in Jonesboro, Georgia, near his home last year, and had been trying to kill the employees and customers there, authorities said.

There were no reported injuries.

The shootings happened around 2:30 a.m. on July 30, 2021, according to the United States Department of Justice. Both convenience stores were open for business.

Foxworth, who is white, fired into the businesses over “the perceived race, color, or national origin of the people inside the stores,” the DOJ stated.

Officers said they found a 2016 Ford Fusion weaving on the road after they responded to the separate shootings, according to The Atlanta Journal-Constitution. A traffic stop ensued, officers said. The driver was allegedly Foxworth. Officers claimed to discover an open container and bag of ammo, including spent shell casings in the vehicle.

“I can give you a name and we can make this disappear,” Foxworth was quoted saying.

This did not “disappear.”

Foxworth allegedly confessed to carrying out the shootings, saying: “This is a hate crime and this is a targeted hit.”

If the allegations are true, Foxworth allegedly hedged no words about. He said that he did not like “towel heads,” or people of color, according to officers in a Fox 5 Atlanta report. He allegedly said he did a U-turn to return to the first location, but opened fire at the second, not realizing he was in a different location now.

Georgia Man Charged with Federal Hate Crimes for Two Racially Motivated Shooting Incidents: Larry Edward Foxworth has been charged with two counts of committing a federal hate crime and discharging a firearm in furtherance of a crime of violence. https://t.co/iZpUu3nuMC

A federal grand jury has indicted Larry Foxworth of Jonesboro, GA on federal hate crimes charges after investigators say he shot at two Clayton County gas stations last summer because the race of people in the store. I’ll have the full details tonight on @11AliveNews. pic.twitter.com/p8X4fFQ7wM

“No person should be afraid to shop or go to work in our community. Nor should people have to worry that they may be violently attacked because of the color of their skin,” said U.S. Attorney Ryan K. Buchanan of the Northern District of Georgia. “Combatting hate crimes continues to be among the Department of Justice’s top priorities. In this district, allegations of criminal activity fueled by hate and racism will always merit our full attention.”

“Hate-fueled violence has no place in a civilized society,” said Assistant Attorney General Kristen Clarke of the Justice Department’s Civil Rights Division. “Thankfully no one was injured by the conduct alleged in this case, but the Justice Department is committed to using all the tools in our law enforcement arsenal to prosecute allegations of hate crimes.”