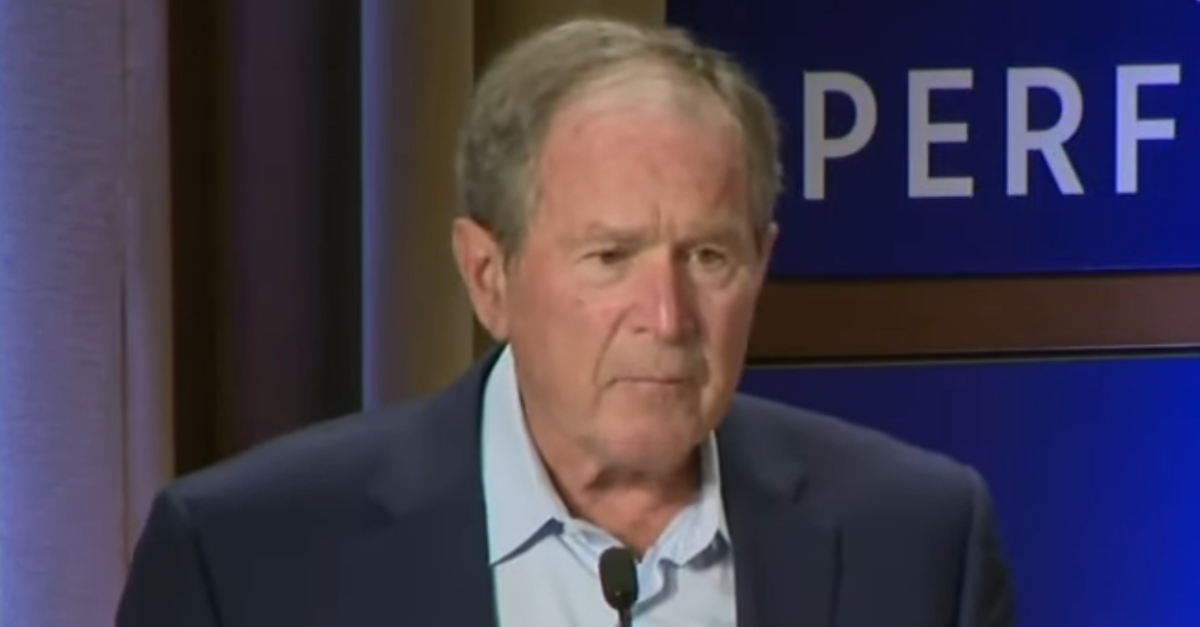 An Iraqi man living in Ohio has been accused hatching a plot to murder former President George W. Bush.

Shihab Ahmed Shihab Shihab, 52, was charged in a case unsealed at a court hearing on Tuesday, the United States Department of Justice announced.

He is an Iraqi citizen living on Columbus, Ohio, authorities said. He arrived in the U.S. on a visitor visa in September, and made a still-pending claim for asylum in March. Shihab lived and worked in Columbus and Indianapolis, Indiana, employed in markets and restaurants, officials said.

But that’s all coming to an end if he’s convicted, because he allegedly plotted to smuggle four Iraqi nationals into the United States to kill Bush over the Iraq War.

The DOJ says that Shihab planned to get the four would-be assassins out of the country via Mexico.

In connection with that scheme, Shahib allegedly traveled to Dallas in February of 2022 “to conduct surveillance of locations associated with the former President,” the press release says.

Then, in March, Shihab allegedly met with other people in a hotel room in Columbus, Ohio, to look at “sample firearms and law enforcement uniforms.”

In addition to being accused of aiding and abetting a plot to murder the former president, Shihab is also charged with trying to illegally bring foreign nationals into the U.S.

“[I]n August 2021, Shihab allegedly intended to help who he thought was another Iraqi citizen enter the United States for a fee of $40,000,” the DOJ press release says. “Shihab provided specific instructions on how he would smuggle the person into the United States after 60 days. In October and December 2021, Shihab accepted tens of thousands of dollars for the purported smuggling.”

The person who Shihab thought was another Iraqi citizen didn’t actually exist.

“In reality, the individual was fictitious, and the interaction was coordinated under the direction of the FBI,” the DOJ press release said.

A Brown University study estimates that as many as 207,156 Iraqi civilians have been killed by “direct war related violence” since the the U.S. launched Operation Iraqi Freedom in March of 2003 on the grounds that Saddam Hussein’s regime had weapons of mass destruction, although no such evidence was found. The Department of Defense estimates the operation resulted in at least 4,400 U.S. military and civilian deaths.

Last week, Bush inadvertently condemned the operation himself: during a speech at his namesake presidential library in Dallas, he bemoaned a “wholly unjustified and brutal invasion of Iraq” while criticizing Russian President Vladimir Putin.

“I mean of Ukraine,” Bush reportedly said, correcting himself, as members of the audience chuckled.