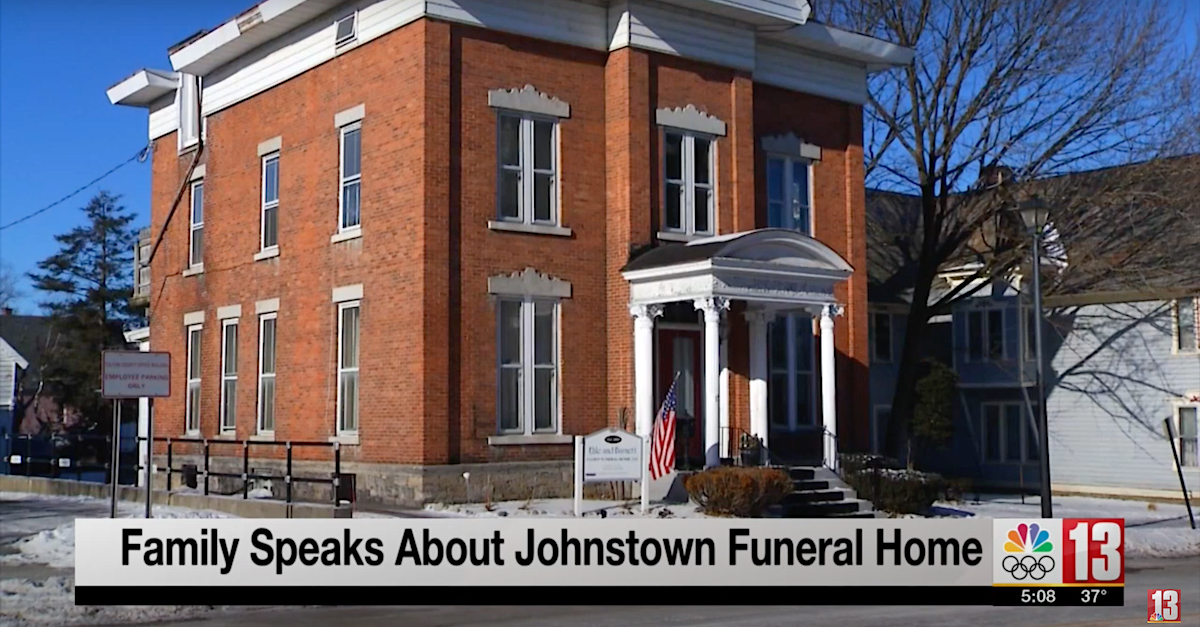 According to the Johnstown, N.Y. Police Department, Brian M. Barnett, 35, who owns the since-shuttered Ehle-Barnett Family Funeral Home, is on the cusp of being charged with three counts of concealment of a corpse, a Class E felony; one count of grand larceny, a Class D felony; and additional violations of state health law. According to the police, prosecutors are also planning to file two counts of child endangerment, both misdemeanors, because decaying “bodies . . . were left around with children’s toys in areas where the children [who] were in the residence had access” and presumably played.  The police alleged that the toys were near a “decaying body” and therefore caused a “health risk” to the children who lived in the residence.  The Albany, N.Y. Times-Union said the children noted were Barnett’s.

The charges are pending, Gilbo said Friday morning, because Barnett was at an area hospital —  St. Mary’s Hospital and Healthcare Network of nearby Amsterdam, N.Y. — for an “evaluation.” Gilbo did not elaborate on its purpose beyond saying officers had “certain concerns” when asked if Barnett seemed “unfit” or “unwell.”

Chief Gilbo previously announced in a press release that his officers executed a search warrant on Jan. 14 at the funeral home in response to a complaint from a funeral home customer. The customer had “for weeks” been trying to reach Barnett, the police department said, but Barnett was refusing to return phone calls. The police were also unsuccessful at attempting to contact Barnett, Gilbo said.

State authorities told the police that Barnett’s license had been suspended and that the funeral home “could not store or handle any deceased persons,” Gilbo recounted in the press release.

“After multiple attempts to reach him, Barnett later contacted Police,” the chief wrote. “Barnett then told Detectives that he still had the human remains at the funeral home and no services had been completed in several weeks. Police were able to get the remains turned over to the A.G. Cole Funeral home for proper services.”

Detectives then learned of yet “another deceased person . . . who had been retrieved by Brian M. Barnett in late 2021,” Gilbo continued. “Death records indicated that the person had been cremated. When contacted, the crematorium listed on the death certificate had no record of a cremation being completed.”

Though the precise timeline of the investigation is slightly unclear, Gilbo added on Friday morning that a traffic patrol officer pulled Barnett over on Jan. 6, 2021, and that Barnett was driving around with “a box or a casket in the back of the vehicle.”

The totality of the revelations led Judge Michael W. Smrtic to issue a search warrant.

After knocking on the funeral home’s front door for about fifteen minutes, Gilbo said on Friday, officers entered the premises and began a search. Barnett eventually appeared and was detained, the chief said.

The chief’s descriptions suggested that Barnett lived “upstairs” at the funeral home; the funeral home’s Facebook page says that “[e]very owner” of the long-standing facility, “including Brian, has lived over the Home during their tenure as owner.”

Police found “human remains within the funeral home” that “were not stored in a temperature controlled location and were not cared for in any manner,” Gilbo said in the earlier press release. “Detectives noted excess furniture and household items, stored around the remains. Detectives also noted signs of advanced decomposition, due to the improper handling and storage.”

Police noticed that “a significant amount of garbage and excess furniture” was rubbished about in the funeral home’s garage. “Upon searching the garage two additional human remains were located, both in advanced states of decomposition. Both persons appeared to have been in the garage for a substantial amount of time.”

In sum total, police located the remains of four people and and the ashes of 18 other people. Since Barnett’s licenses had been suspended, he was not allowed to keep the remains on his property, Gilbo noted; the chief also predicted that additional charges were likely because the funeral home may have been pocketing payments without providing the promised requisite services.

Coroner Margaret Luck said that it was not unnecessarily strange for a funeral home to house cremated remains because loved ones often request to be buried together. So, if one person predeceases another, remains are sometimes housed in funeral homes. But Luck said she needed to investigate further to determine whether the remains were being properly or improperly kept.

Luck also said that she had not officially identified any of the remains recovered — saying she had to confirm the identities of even the named remains and containers that were found.

Gilbo said the matter is further complicated because Barnett also worked for another licensed funeral facility.

The chief also added that finding proper judicial officials to handle the case may be difficult because some of the local judges may recuse themselves — presumably since many had visited or done business with the funeral home in the small city, population 8,200.

The Times-Union reported that “more than two dozen families have come forward to raise questions about the handling of dead relatives’ remains.”

To help sort out the mess, the police chief publicly asked funeral home customers to contact the authorities with as much documentation as possible. He also thanked the nearby A.G. Cole funeral home for its cooperation in caring for the remains and in helping to ensure that proper records were being assembled.

The only possible motive, Gilbo said, was “the need for money.” The chief later said he was unsure if the motive was “greed” or “need.”

The funeral home, at 15 North William Street in Johnstown, is literally next door to the active yet historic Fulton County Courthouse — a building built by the British in 1772 that was swiftly co-opted to remain employed as the local house of justice after the American Revolution was won. Johnstown is about an hour west-northwest of Albany.

Barnett’s legal woes are myriad despite his under-the-nose proximity to the local assemblage of government officials in the county seat.  Those woes include underlying enforcement actions by the New York State Department of Health and a civil lawsuit.

The Department of Health on Nov. 30, 2021, suspended Barnett’s license “for operating an unregistered firm,” the DOH told Law&Crime in an email. The problems, however, were not isolated to just the year 2021, according to state documents also obtained by Law&Crime. A stipulation says Barnett operated an unregistered funeral firm for 140 days from July 1, 2019 through November 18, 2019, and again from July 1, 2021 until the date of the stipulation on Oct. 2, 2021.

“Funeral directors must register their license with the New York State Department of Health on a biennial basis to work lawfully as a funeral director in New York State,” the DOH explained to Law&Crime in an email. “All registrations expire on June 30 of even years.”

The stipulation document also says Barnett failed to register his personal funeral director license in 2020 and therefore “operated a funeral firm without being under the immediate and personal supervision, direction, management, and control of a licensed funeral director or undertaker” between Oct. 29, 2020 and Oct. 2, 2021. Barnett further refused to allow health department officials to examine funeral home documents that the DOH is authorized to inspect under state law.

The penalty last fall for these stipulated license violations was a $2,000 fine remittable to the Department of Health. Barnett and his funeral home were both suspended from business for 90 days.

The Department of Health told Law&Crime via email that the remains that were kept in the funeral home “were transferred to another funeral home under the authority of the [Fulton County, N.Y.] Coroner and clients were notified.”

A “consumer complaint” against the funeral home filed in May 2021 remained “under active investigation,” the DOH added.

Law&Crime also uncovered a civil lawsuit against the Ehle and Barnett Family Funeral Home as a corporate entity. The lawsuit, filed in Fulton County Supreme Court on Nov. 21, 2021, alleges that the funeral home obtained but never paid for $9,295.72 worth of goods. The plaintiff is the Matthews International Corporation of Allegheny County, Pa., a supplier of caskets, cemetery headstones, and other memorial products.

The stipulation, the police press release, the civil suit, and the chief’s press conference are below.