‘I Do Forgive You’: Man Who Shot Lady Gaga’s Dog Walker During Pooch Theft Is Forgiven by Victim Before Being Sentenced to Decades in Prison 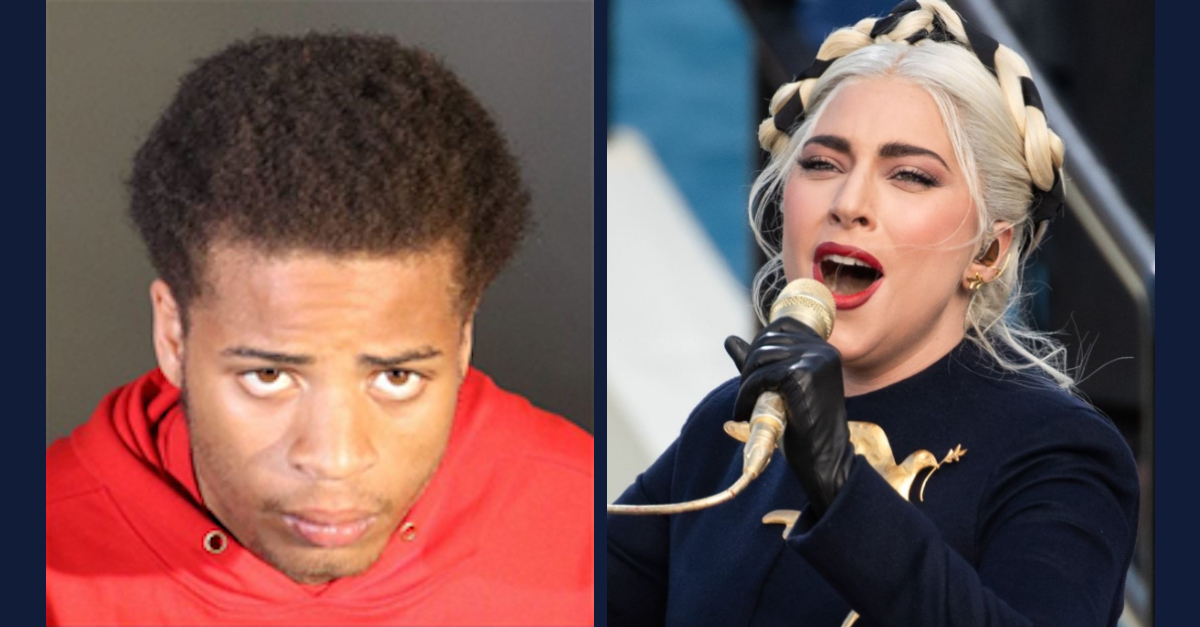 James Howard Jackson appears in an April 27, 2021 mugshot released by the U.S. Marshals Service. Lady Gaga was photographed in Washington, D.C. on Jan. 20, 2021.

The man who stole Lady Gaga’s dogs and shot her dog walker in the process of the heist has been sentenced to spend 21 years in prison.

According to the Los Angeles County District Attorney’s Office, James Howard Jackson, 19, accepted a plea deal for 21 years in prison on one count of attempted murder. The defendant pleaded no contest to the charge that stemmed from the February 2021 theft.

The high-profile target in the case was coincidental, authorities have said. But the incident resulted in the pop star briefly losing her three beloved French bulldogs – and a furious search for those responsible.

Jackson was one of five people total involved in the pooch purloining operation. On the day in question, he and two other people were driving all around Los Angeles County through the neighborhood of Hollywood, the separate City of West Hollywood, and the relatively far-flung San Fernando Valley. The trio were “looking for French bulldogs,” prosecutors have previously alleged, because the breed can fetch thousands of dollars per dog. On their hunt, they found Gaga’s dog walker, Ryan Fischer, who was hit, choked, and shot.

“Oh, my God! I’ve been shot!” Fischer said after he was robbed and shot by Jackson, in audio captured by a nearby doorbell camera just off Sunset Boulevard. “Help me! I’m bleeding out from my chest!”

The dogs Koji and Gustav were stolen. The third dog, Asia, escaped and went to Fischer to comfort him after the attack.

Jaylin White, 20, and Lafayette Whaley, 27, are alleged to have been in the car with Jackson during the dognapping incident. Each of the two alleged accomplices were also charged with robbery, conspiracy to commit robbery, and attempted murder.

Jackson was additionally charged with assault with a semiautomatic firearm and a felon carrying a concealed firearm in a vehicle. White was also charged with one count of assault by means of force likely to produce great bodily injury.

Two other people were implicated as accessories after the fact: Harold White, 41, and Jennifer McBride, 51. The elder White is the younger White’s father. Police eventually figured out McBride was in a relationship with the older man – after she returned the dogs to the LAPD’s Olympic Station in order to try and collect the reward money.

“This was a brazen street crime that left a man seriously wounded,” Los Angeles District Attorney George Gascón said at the time charges were leveled in April 2021. “We have alleged very serious charges in this case and have faith that justice will be appropriately served as this case unfolds in court.”

The case against Jackson hit an embarrassing snag in April of this year when the defendant was accidentally released from jail due to what authorities in the City of Angels termed “clerical error.” After a federal manhunt, he was re-arrested in nearby Palmdale in August 2022.

The younger White previously pleaded no contest to one charge of robbery in the second degree and received a four year sentence.

According to Rolling Stone, Fischer spoke to Jackson just before his sentencing and recounted his trauma – but ultimately forgave him.

“You shot me and left me to die, and both of our lives have changed forever,” the dog walker said. “I do forgive you. With the attack, you completely altered my life. I know I can’t completely move on from the night you shot me until I said those words to you.”

Fischer also thanked Jackson for keeping the dogs safe during their time away from their owner.

“They were returned and returned to their mom,” he said. “I don’t think I could have lived with myself if they died.”