‘I Always Just Wanted to Kill’: Man Allegedly Used Grindr to Find and Kill Men, Posed for Selfies, Wrote a Bible Verse on a Wall and Watched Wrestling in Victim’s Living Room 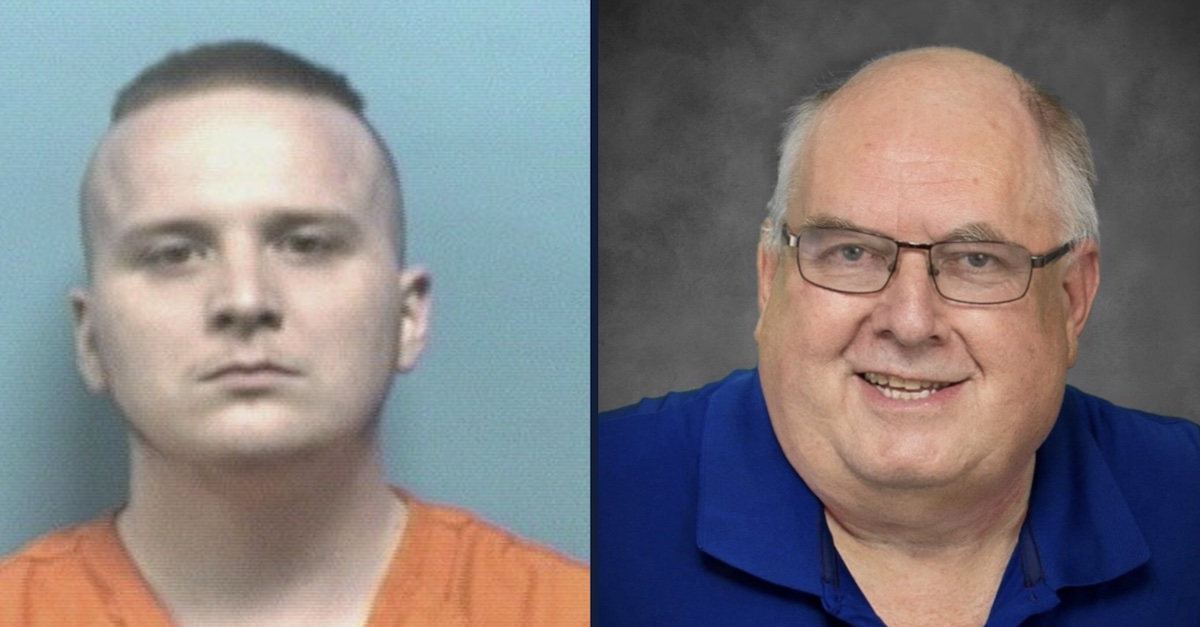 A “disturbing” criminal complaint sheds new light on how a suspected killer is believed to have carried out a gruesome murder in Green Bay, Wisconsin amid a multi-state spree of violence.

The probable cause document filed in Brown County alleges that Caleb Anderson, a 23-year-old from Caspian, Michigan, used Grindr — an LGBTQ dating app — to find and kill Patrick L. Ernst, a 65-year-old man he did not know.

According to the Green Bay Police Department, Ernst was found dead on Aug. 2 after a call was made for a welfare check. Concerns were raised when Ernst did not show up to work at Sofidel, a toilet paper company where he was employed for two decades. (Green Bay and its surrounding communities are home to many large paper mills.)

Once inside the victim’s apartment, cops saw blood in the bathroom and blood spatter on the walls of a bedroom. Ernst was found dead and “completely naked” underneath a pile of clothing (including a Milwaukee Brewers jacket) on the bed, documents said.

“A cross was reported to be on top of the pile of clothing above him,” the complaint said.

“I am so sorry he didn’t deserve this,” the note allegedly said.

The victim had “slash style marks” and “stab marks” on his “stomach, arms, face, and neck,” investigators said, adding that there was a Bible verse possibly written in permanent marker on the wall above the bed.

“‘Psalm 23:4 Yea, though I walk through the valley of the shadow of death, I will fear no evil: for thou art with me; thy rod and thy staff they comfort me.’ Under this passage was a scribble mark with an x through it,” the complaint said. “I could make out the crossed-out object as being a number 7. Next to this scribble was the date ‘8-1-22’ as if the suspect had started to write the wrong date. Next to the passage to the right was the letters RIP which stand for Rest in Peace.”

In the early stages of the investigation, cops said, it was realized that Ernst’s 2013 Ford Fiesta was gone and a 2004 Toyota Camry with Michigan plates was in front of the apartment instead.

That vehicle was registered to the suspect, who was also under investigation for an alleged assault and attempted abduction in Michigan, authorities said. Those alleged crimes took place one day before Ernst was killed. Anderson had allegedly attacked woman as she jogged in Caspian — the same small city, population 805, in the Upper Peninsula where the defendant lived.

Wisconsin investigators said they soon learned Anderson was arrested by the Helena Police Department in Alabama and U.S. Marshals for the “subsequent” Aug. 3 alleged capital murder of 52-year-old Dwight Dixon. Down south, Anderson allegedly waived his Miranda rights and confessed to both killings and the alleged attempted abduction in a recorded interview.

During the interview, the suspect allegedly admitted to everything and more, even to burning a church down in Alabama.

“He said he went there to pray and wasn’t getting a response back, explaining why. Anderson broke down and was crying and started crying about his first attack. While discussing god, Anderson said he never felt anything while explaining his family was religious,” the complaint said. “The conversation turned to Anderson talking about using legal marijuana and talking about being really high when he left Michigan.”

From here, Anderson allegedly admitted he wanted to “beat the shit out of […] and kill” a female jogger and that he killed both Dixon and Ernst. The thought of his mother made him stop the attack on the jogger, the suspect apparently claimed.

“He said half way through it he started thinking of his mom so he hit [the jogger] a couple times and ‘went away,'” the complaint said. “Anderson added that he had the girl in a choke hold at one point but let her out of it because he was thinking of his mom.”

Anderson is accused of fleeing Michigan and heading for Green Bay, where he allegedly bought a burner phone from Walmart, purchased a Straight Talk wireless package, and downloaded the Grindr app.

“Anderson said he was aware that Grindr is where guys go to hook up with other guys. He said that’s why Anderson thought it would work. Anderson mentioned it would be easy but then rolled that back saying it was messed up,” the complaint said.

The suspect said he met up with Ernst, went into his bedroom, and took off his own clothes.

“I didn’t really want to, but I took mine off too,” Anderson allegedly said, claiming the victim started “jerking him off” before the slaying. The suspect allegedly admitted he thought about killing Ernst with his “bare hands” but used a knife instead.

“He said he decided to use a knife and talked about an open world video game that came out in 2010 that you could do whatever you wanted to do. Anderson added that was always one of those things, he wanted to see what it was like. He added ever since he was fourteen or fifteen, ‘…I always just wanted to kill somebody,'” the complaint continued.

The suspect recalled Ernst repeatedly saying “Why are you doing this to me?” as he stabbed him to death, authorities said.

In that moment, the suspect allegedly claimed the killing made him feel “unstoppable” and “amplified.”

After watching Ernst as he lay dead, Anderson watched wrestling on TV in the living room, the complaint said. He allegedly took some of the victim’s wrestling and Rocky DVDs, as well.

From here, Anderson allegedly admitted he used Grindr again to meet up with the second victim in Alabama and kill him. The suspect allegedly said he used Grindr not for sexual reasons but because he thought it would be a smart and guaranteed way to “get somebody alone to kill them.”

“He didn’t know [the victim’s] name, but knew he was big. He said he looked at that as a challenge and said he was a giant slayer. He added his wrestling name was ‘Jack Rader’ named after a serial killer (Dennis Rader),” the complaint said.

Investigators said that they also found “disturbing” video and photo evidence on a cell phone from the first killing in Wisconsin.

In one five-second selfie video, a shirtless Anderson allegedly said “I’m ok” but “He’s not,” referring to Ernst. The suspect was smiling and covered in blood, cops said. The complaint said there was also a selfie image of Anderson sticking his tongue out while blood was visible on his face, head, and upper body. A second image allegedly showed Anderson naked and covering his genitalia in a mirror selfie taken in Ernst’s bathroom.

In addition, investigators allegedly found a photo of Ernst’s body on the bed and a subsequently photographed “Welcome to Mississippi” highway sign.

Green Bay Police said Friday that Anderson was charged with first-degree intentional homicide in Wisconsin even as he remained jailed in Alabama.

An obituary said that Ernst was a collector of bobbleheads and sports memorabilia, and that he rooted for the Milwaukee Brewers, Milwaukee Bucks, and the storied Green Bay Packers.

“Pat was a kind and generous man who always put others first and was loved by those who knew him,” the obituary said. “He will be greatly missed.”