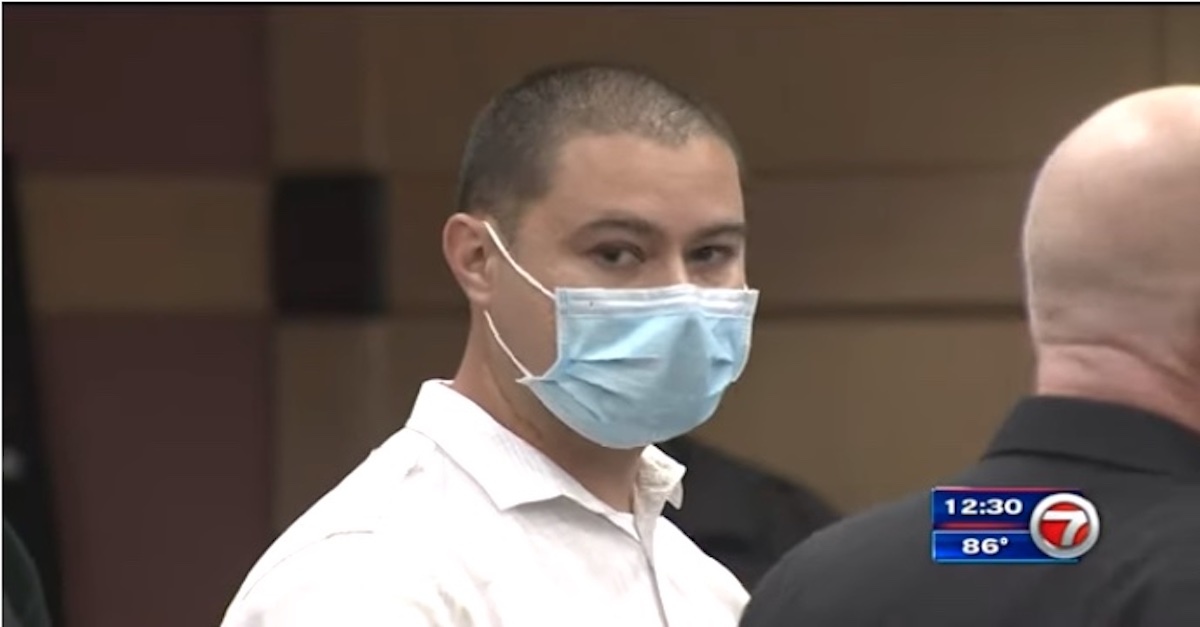 A former Florida police officer has been sentenced to serve ten years in prison after being convicted of offering two teenagers a stark choice:  either (1) to remove all their clothes and then run naked in front of him, or (2) to face arrest and jail time.

Michael Martinez, then 28, was convicted in October 2019 of two counts of extortion and two counts of unlawful compensation for his actions involving Remy Riley and her then-boyfriend Kyle Shoulta.  The victims were both 18 when the incident occurred.  A jury ultimately agreed that Martinez crossed the line from law enforcer to lawbreaker.

At the time, Martinez was reportedly on probation at his job at the Miccosukee Police Department, which serves the Miccosukee Tribe of Indians of Florida. He was fired around one year after the incident, according to local reports.

Martinez appealed, but court records indicate that Florida’s Fourth Circuit appellate court affirmed the conviction via a terse one-page ruling which in essence swatted Martinez’s arguments aside with zero written analysis whatsoever. Martinez was taken into custody on Thursday, July 1.

According to the arrest affidavit, the incident occurred in August 2016. Martinez pulled over Shoulta and Riley during a traffic stop in the Everglades. Martinez discovered alcohol and marijuana in the car, including a pot brownie, and offered the couple a choice: either face arrest, or follow Martinez down a secluded road.

“In lieu of arresting [them], Michael Martinez ordered them to run naked and solicited a hand job from [name redacted],” the arrest affidavit said. “[Shoulta and Riley] were threatened with arrest if they did not run naked, therefore they were extorted in violation of Florida law.”

Martinez made Shoulta strip first, according to Shoulta’s testimony at trial.

“I was given a choice of go to jail or run, so I took the choice to run naked,” Kyla Shoulta, now in his 20s, said at trial, according to local station WSVN.

Then, according to Riley, Martinez turned to her, ordering her to remove all of her clothes.

Reports at trial revealed that Martinez had solicited the sex act from Riley.

Riley testified that the incident had taken an emotional toll on her.

“It was not what I wanted to do,” Riley said. “It felt like I had no choice.”

“At 18 years old, I don’t feel like you should know what to do,” Riley added while addressing her shock at not quite knowing how to handle Martinez’s bizarre request.

“I felt like that was his job” to do the right thing, she concluded.

At Martinez’s sentencing hearing on Thursday, Shoulta reportedly sat directly across from the defendant in court.

On July 2, Martinez filed a motion for post-conviction relief. The case docket doesn’t indicate when a hearing on the request will be heard.